Has anyone ever seen any listing of casting numbers of the 727/904 valve body sections?
I am looking for a spare valve body and the one offered to me has numbers that seem to be '72 year.
Mine is a '69 and as far as i know the '69-'71 are same.
I did some Googling but did not find any listing of years and part numbers like there is for so many Mopar parts.

Any info is highly appreciated!

I'm not a numbers guy but, IIRC the valve bodies started to change in '71 to match the changes in the 727. But of the many dozen 727's I've had across many years, never paid attention to the numbers. Good luck.

There is a huge listing of available major transmission parts and cases....but I have to find the link.... it's not something I've seen posted on these sites before....I think the trans rebuilders use it to search for what's available. I'll look. You can also likely find that info in an old Transstar parts catalog.


Lefty71 said:
There is a huge listing of available major transmission parts and cases....but I have to find the link
Click to expand...

If you would find it and share it would be really helpfull! 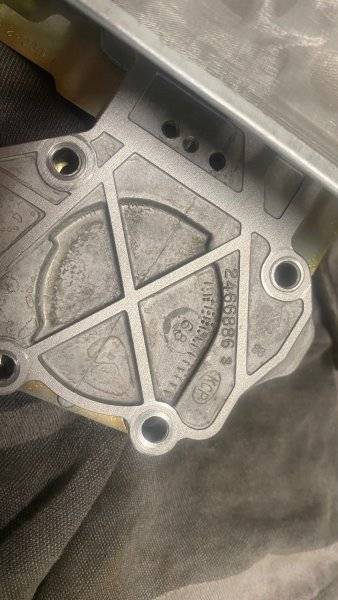 There's a year cast into every factory one I've ever seen. And of course, bear in mind the two halves are not a "match", they will have different cast numbers for top and bottom. I`ll look...

Might have been this one.... but if so they've changed their format a little.... i`ll keep looking.

I had the same in mind, therefore when I've seen the part number 3410994 said '72 i got confused.
Though on the pictures i do not see the PTK body attached.
Another thing to know is the Lock-up version, i think these came even later than '72, right?

Lefty, i had been lurking that website in the past for ordering overhaul parts. (they never replied me so i went elsewhere)
I did not find them mentioning any part numbers for the valve body's.

I went through the parts catalog for several years models.
As per the Chrysler bible it should be 2892 355 for the upper section and 2466 886 for the bottom section for a '69 Coronet with the 440 HP engine.
Since mine is 2892 348 for the upper body, i can only assume this is a little earlier version.
Since the '68 parts catalog shows the same and lower numbers for the part, also '67 parts checked but are even lower in numbering.
The bottom section 2466 886 was used over a longer time and is a more "common" part number.

The unit the shop here offered me as a replacement valve body has the "3410" numbers, which are seen in the '72 parts catalogs and i am not so sure this unit is suitable for mine.
As i've seen the valve body does not have the PTKD attachment bolted on, but these years likely could have the lock-up modification.
For a valve body for $400 and not sure it will work i guess the chances are a little too pricy.

IIRC the PTKD didn't have any "attachment", it had different valve arrangements and a different upper casting with the wide top cover on the kick down valve. Don't think the "lock up" started till later. What are you trying to accomplish? The price is about the same as an aftermarket HP valve body. Good luck.

From what i've seen is that the PTKD is like a small aluminium body that bolts onto the main valve body on the side where the shift valves sit.
Normally that location has a steel plate installed, maybe that is an old model and they were casted different (integrated) later on.


66Satellite47 said:
What are you trying to accomplish?
Click to expand...

Well, in my initial understanding i believed i have the wrong valve body.
But going by the part numbers they seem to be correct.
My valve body was modified by a PO who installed a B&M kit, which also swapped the separator plate.
So no i am thinking i only might need a stock separator plate to replace this thing to have it correct.
Since i installed a TF-2 kit i had a ton of issues which are solved now really, but still have 2 remaining problems.
1. The 2-3 shift is very harsh at light throttle (very good at moderate/hard/WOT)
2. The governor is not building up pressure up till 20 mph.

Since the 2-3 orifice size in the separator plate determines the shift "feel" (bigger is firmer) and the one on my separator measured .150" causing it to be so rough.
I managed to reduce it to .135" but did not do much obviously, so a stock separator should be better to have since i can not be certain what else this thing is causing.
The governor issue is likely not related to the separator plate, but just a hope it works.

You could most likely call A&A and get a good used valve body for your application and eliminate all those possible variables that were added when someone modified yours.

Lefty71 said:
get a good used valve body for your application
Click to expand...

I am sort of trying, though here in Europe they are rare and expensive, buying from the US they become expensive due to shipping and import charges.
I am starting to lean more and more to try a separator plate only, since the body sections are correct installing an original separator plate might bring it to "normal".
I had an hour drive today and it drives fine, only that rough 2-3 shift at very low throttle is annoying me.
With moderate and anything above it shifts flawless to 3rd, short and firm without any "clunk".

Two things....
Did the servo lever get changed when the valve body was modded?? Maybe a different ratio could help?

And most importantly, do you have and have studied the major 727 trans rebuild and mod books available to us?? One was written by Carl Monroe, and the other Tom Hand... fine tune troubleshooting and problems of this nature are discussed in both books. Maybe you can figure out just exactly where to start?

The servo lever was not changed, it is a 3.8:1 ratio.
I went through the books, but most information and help i had from Transgo engineering who helped me out.
According him i should reduce the orifice size to .090" to soften the 2-3 shift, though i was not able to get it any smaller then .135" by knocking the orifice with a steel ball and a hammer.
I guess a stock separator plate will be around that size (or smaller).
It is just too bad it is only harsh at light throttle.

Just spit balling here, but maybe you don't have enough springs in the front clutch drum. Those varied widely and affect the shift quality. My guess.

So far the Transgo guy was right, and there is no doubt in me not to believe him this time.
Are these separator plates unobtanium these days or still available?
I found the part number of that, which should be 2538043. (never expected the parts book to have all these numbers...lol)


66Satellite47 said:
Just spit balling here, but maybe you don't have enough springs in the front clutch drum. Those varied widely and affect the shift quality. My guess.
Click to expand...

The clutch has 10 springs, which is correct for the 440 HP version and are installed as per diagram.
I used the red eagle frictions with kolene steels in there, also the frictions are the thin ones so i have 5 of them in there, clearance was arranged to be by the book. (can't remember now how much it was, i have it writen down somewhere...)

A five disk clutch might really want 12 springs, maybe even 15. I normally use 12, but that's with an aftermarket reverse manual valve body. I've never tried a stock valve body with a modified combination.
You must log in or register to reply here.