Some of you may have seen my post in the welcome wagon but if now I'm going to introduce my long-term 1969 Charger project. I'm a little slow to the build thread but better late than never I guess. Apologies in advance for the long-winded intro but hopefully something in here will help someone else in their project or provide idle amusement.

Despite never owning one of these cars until recently my history with the Charger goes way back to when I was a kid watching The Dukes reruns on TNT everyday. I'd hurry home from school and rush through homework to click the TV on and catch my favorite orange car.

Fast forward a few (not saying how many) years to 2018 and I had just about given up on owning anything other than a total rust-bucket '69 Charger. One random evening I happened to be browsing Craigslist, checking out Charger prices because I just couldn't help myself. I saw an ad for a '69 that looked promising but also seemed a little questionable based on the price. I sent it to a few friends who agreed it seemed odd but we are all well enough versed in Craigslist scams to not fall for anything stupid. After going back and forth with the seller a few times I was third in line for the car as of that Friday evening. Here's where the story gets good. It was Friday and I was booked on a flight to China for business for 2 weeks the coming Sunday at 9:30am. Late Friday night the seller emailed and informed me that the two other people in line in front of me were starting to change their stories/plans and that if I was serious and wanted the car I could come out Saturday morning and take a look, the only condition was the car had to be gone that weekend.

Saturday morning I borrowed a truck from work, rented a trailer and took off. I picked up a buddy for backup and a set of rational eyes, knowing I couldn't be trusted to make a logical decision regardless of the car's condition. We were both still a bit nervous that the deal would go sideways but off we went regardless. Once we get to the house our fears were totally put at ease as the seller was a perfectly normal and really nice guy.

The story of the car goes that it was the seller's high school car back in the 90's and sometime around 1994 he took it off the road and put it in his parents garage. He/his brother had started working on it and lost interest and just let the car sit. Fast forward to 2008, he relocated and had the car brought with him where it lived under a tarp in his driveway. He never worked on the car or did anything to it besides putting a fresh tarp over it when the previous one deteriorated.

At first, seeing how low the back of the car was sitting, I assumed the whole back end had rusted out and the springs had collapsed into the trunk. On further inspection that couldn't have been further from the truth. The entire car was completely rock solid, with the exception of the very center of the trunk pan. Floorpans, rails, quarters, rockers, all rock solid with the majority still wearing factory undercoat. The low stance was simply due to some hastily installed lowering blocks.

The body was laser straight with the exception of a couple of dings and small dents but the grill, front valance, and front bumper were missing which had me doing some depressing mental math. At that point the seller casually mentioned that he had wrapped the grill and valance in moving blankets when he had the car moved back in '08 and left them sitting in the crawl space. Out come two moving blanket wrapped bundles containing an almost mint condition grill and valance. The grill is in amazing condition besides a few dents the center "I" piece and the fact that someone had fogged the entire thing in rattle-can satin black.

The interior was in really good shape as well with the exception of the front seat covers. The rear seat is almost perfect, the headliner is in great shape and everything appears to be complete, albeit pretty moldy from sitting so long. The odometer and title both show 79k miles which, given the car's condition, I don't have a lot of reason to doubt.

At this point I was pretty well freaking out so money was exchanged, title signed and we started loading it up, all while I was waiting to wake up because there was no way this was all real. All four tires were totally trashed but nothing was actually locked up or frozen so after about 2 hours of wrestling with a crappy come-along and various straps and we were off to the races.

At this point it's around 5pm Saturday evening (remember the early Sunday morning flight?), and getting the car back to my house would never have happened so we drove an hour back to my buddy's house where we could unload the car with his tractor and I could leave it securely until returning from my business trip. Unloading was much easier with the help of the tractor and the car was tucked in under a cover. It broke my heart but we wrapped the car back up in a tarp and I took off driving the 2 more hours back to my house, dropping the trailer, unloading tools and attempting to sleep before my flight the next morning.

Fast forward a few weeks I get back stateside and immediately make plans to get the car. I made a run out to the car, put it up on jack stands, pulled off the wheels and tires and started digging in. I had verified the fender tag/dash VIN before I bought it but I didn't have time to check for the build sheet. I popped the rear seat cushion up and sure enough there was a mint condition build sheet folded up and intact after 49 years. So I have matching dash VIN, fender tag, and build sheet, not too shabby. Here's some highlights:

Engine wise the seller told me he thought it was a 440, definitely not the original engine to the car, and it had sat with the top end torn down since at least '08. Given the condition I wrote it off when first looking at the car and didn't even bother checking the #'s. When I went back to the car I spent some more time cleaning up the top ID pad and checking the #'s. As it turns out it's a 1966 440 block. The icing on the cake was finding the original air cleaner tin behind the rear seat when I pulled the cushion to look for the build sheet. An original 1966 Chrysler "TNT" 440, how cool is that? If the block is salvageable I'll probably end up giving the assembly to another buddy who is working on a 1966 Coronet since a '66 TNT 440 just seems more 'right' for his car.

So that's the story of how the car came to me back in 2018. In the past few years I've been slowly chipping away at the car with the idea of making it 'perfectly imperfect'. My plan is to recap progress to date on the car and hopefully provide some useful tips/tricks I've learned through the process. If nothing else it forces me to make progress and document as much as possible.

So here's what the car looked like when the seller pulled off the tarp. It had been sitting in this spot, under that tarp from 2008-2018. 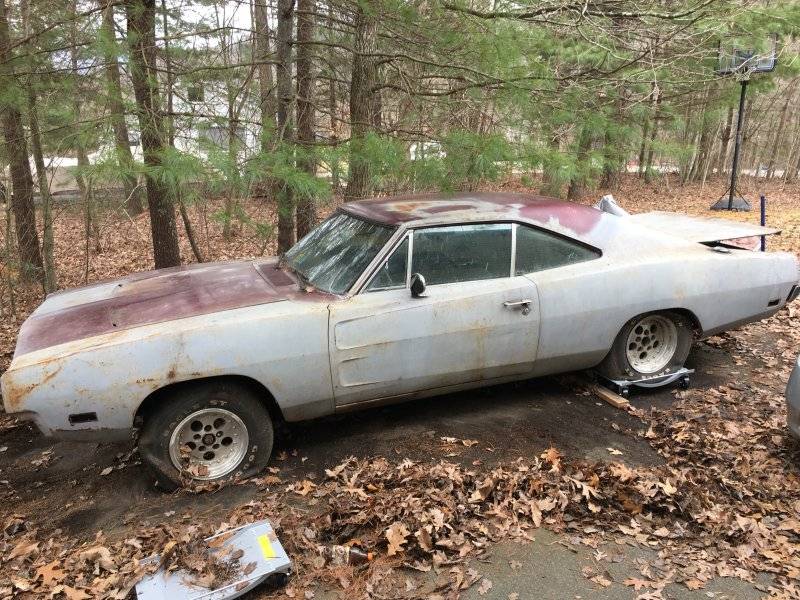 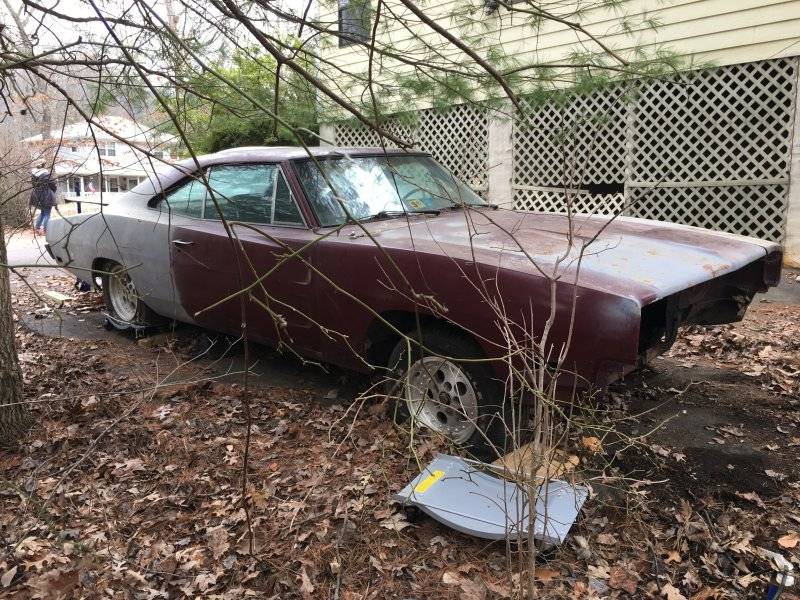 And a little teaser of how the car looks today, more to follow on how we got here. 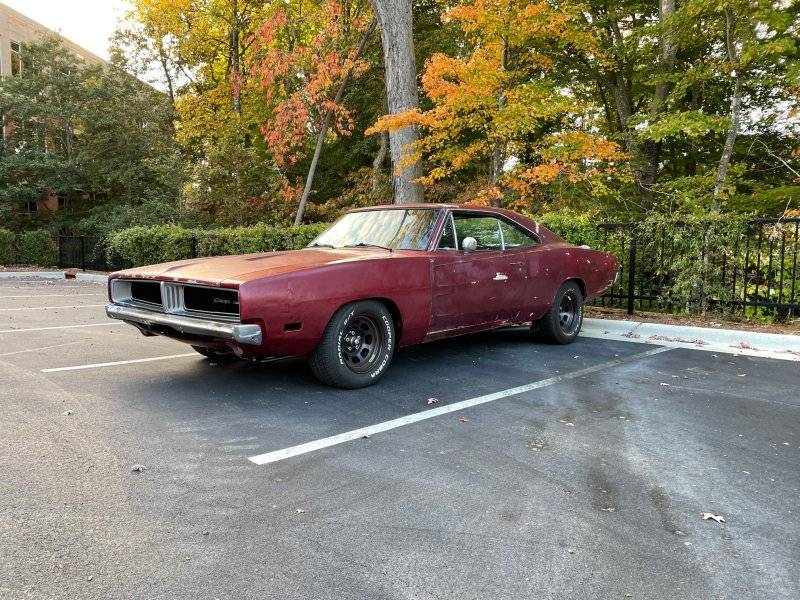 Doesn't happen over night Dan. Life gets in the way. Cash isn't always available for cars and such. Been on mine since 2003. Getting closer. A little more cash at hand now then back then.
Can't wait to see her on the mend.
By the way how is the business going Dan? Next Gen Designs?

It was meant to be yours.

Cool story, great find! Looking forward to seeing the progress on the build!

Great story, looking forward to seeing more!
You must log in or register to reply here.