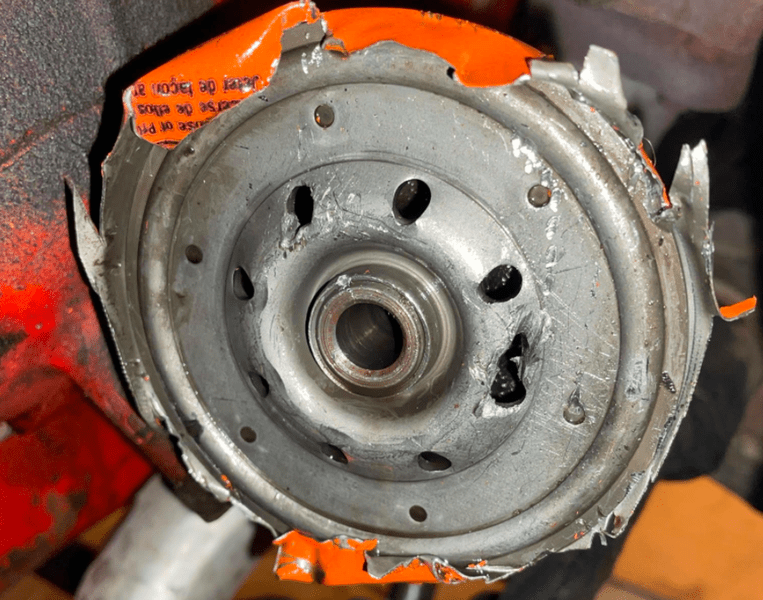 To say Tony Rotundo’s first oil change on his recently-acquired 1965 Plymouth Barracuda Formula S was a disaster would be an understatement. The San Francisco-based wrestling photographer suffered for three days trying every trick in the book, turning a clean orange cylinder into a beat-up thin plate and his excitement for his new car into total exhaustion.

Tony described the photo above. “This is the plate still attached. The phone is right in front of it, which makes it look like there’s a lot of space to work in. There isn’t.”

Tony had bought his 273 cubic-inch V8-powered 1965 Plymouth Barracuda Formula S a few months ago from Washington State and had the vehicle shipped to the Bay Area. “The oil change started out innocently enough,” he said as we began our Facebook Messenger conversation, “though I had to run to the auto store to get a steel band wrench that was big enough for the V8 engine.

“However, the filter would not budge, so I went back to the auto supply store and got a rubber band filter wrench, and that actually crushed the filter a bit, the first time that’s ever happened to me. At that point I was a bit nervous and stopped for the day.

Rotundo began doing a bit of research, watching YouTube videos on oil filter removal techniques; a common trick that he heard — and one that I’ve unfortunately had to employ on numerous occasions — is shoving a screwdriver through the filter casing and using the handle to gain a moment-arm to turn the canister. At the time, Rotundo thought this was a drastic measure. “But little did I know that was nothing,” he foreshadowed.

Rotundo texted the previous owner to ask if there was a trick to the whole oil filter removal process. “It turns out he had never changed the oil in the three years that he owned the car. He said he didn’t drive it a lot. I guess he avoided the catastrophe that was about to unfold for me. Lucky him.”

Things went south quickly. “At every point of the process, the next step seemed more and more outrageous. I thought, ‘Well, if I commit to the screw driver through the filter that will surely get it off.’ It didn’t,” Tony recounted. “In fact, the screw driver just crushed the can more. It was a waste of time. I stopped again for the day and spent the evening thinking about the next move.”

That night, folks in the forum recommended a number of things. One was to take off the oil filter adapter, but when I checked that out, I didn’t have the inch+ socket. The most common thing folks were recommended was heat, so I decided heat and the impact gun was the way to focus. And that eventually got it.”

“SUCCESS! All Fram filters bow to your new overlord!... I was victorious against the mighty Fram Filter. Whew!!” Rotundo wrote on the Facebook page.

“I used a heat gun, not a propane torch, because I really didn’t want to light my car on fire,” he told me. “So I just heated and heated and heated from above and under, and then hit it with the impact [hammer]. The first time I saw it budge, which was a millimeter, I screamed with joy and knew I had it. But, I still had to heat more, and hammer more, moving it a mill at a time, until finally it spun free.” What a saga!

I sure hope he didn't put a Fram back on it!

This is what happens when someone doesn't use a thin smear of oil on the gasket and then over tightens it.

I’ve had a few tough ones in my time, but I’ve always managed without tearing the whole can off.

Old & Rusty threads on/in the filter
&/or rusty threads on the nipple off the block
or been on there for a decade or more
was rusted in place (?)

Seal not lubricated when installed & over tightened
like said before

(didn't look like any rust)
whatever scenario it actually was

still don't think it would take me 3 days

oh well he got it off 'finally'
S

"Always use Red Lock-tite on your filter".
Someone at the parts counter told him

It was over tightened and left for 3 years?
Probably the rubber seal vulcanized itself to the steel. like an old tire to a rim ouch!

I had a similar experience on the 383 in my 71 Charger many years ago. Spent a few hours under the car, but finally got it off. I think it was installed dry on the seal ring. I learned quickly that the screwdriver through the casing was NOT a good idea! Now, I have become a big fan of the sockets that fit on the end of the filters and use a 3/8 drive extension and ratchet. They usually work for me, even when the filter is really tight. I have one that fits every vehicle my family owns now, and purchase one if we get a new vehicle with a different filter.

I know a guy that tightened his wheel bearings this way......he burned up 2 sets. I asked him what the heck happened and he told me of the crazy torque setting he chose.
I've never used a torque wrench on a wheel bearing nut....Tighten until you feel no slop then one notch more to align the castle nut to the cotter key hole.

Big Bad Dad said:
I learned quickly that the screwdriver through the casing was NOT a good idea!.
Click to expand...

This has worked EVERY time I have tried.

Kern Dog said:
This has worked EVERY time I have tried.
Click to expand... 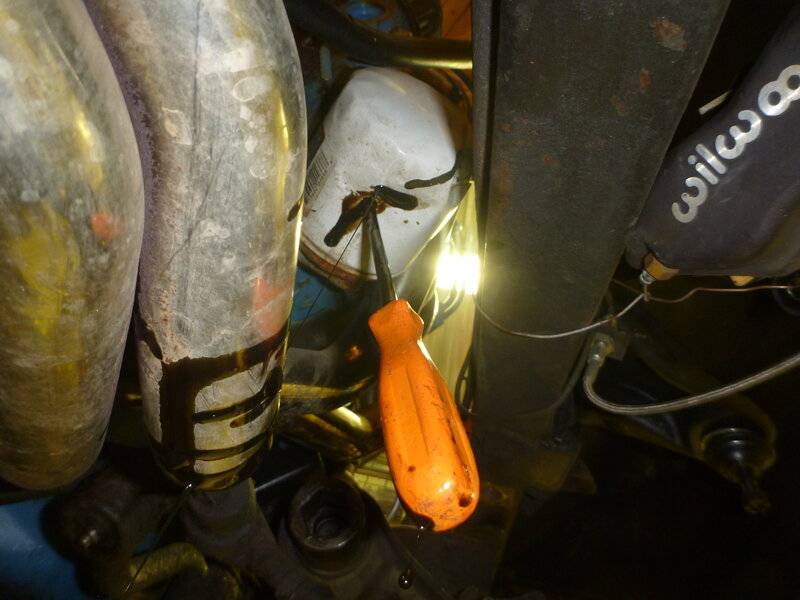 I could not have walked away from that filter.
That S.O.B. is coming off.

Tony Tee said:
It was over tightened and left for 3 years?
Probably the rubber seal vulcanized itself to the steel. like an old tire to a rim ouch!
Click to expand... 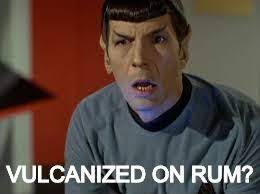 I bought a new 88 Lebaron. 1st oil change I had a similar experience.

padam said:
I bought a new 88 Lebaron. 1st oil change I had a similar experience.
Click to expand...

Wow, brand new ? and that's an easy filter to pop off.

I never smeared oil around the ring as there is ALWAYS oil that drips/leaks down on the pump surface. It's a messy enough job where oil gets everywhere every time. Never had an issue.
You must log in or register to reply here.

Oil leak at filter but only during cold weather?

Ever cross thread an oil filter
2 3