Might be getting back one of my old cars...

explains why you got a convertible.....

Thrashingcows said:
Only deterioration I saw was the paint on the steering column is starting to flake off, one of the power windows didn't want to work, and the chrome on the console top plates has gotten a lot worse...it was in OK shape when I sold it but I had used the best pieces I could find at the time. Once it's home I'll go through the car front to back and replace all the hoses, seals, and service every system on the car to get it ready for cruising again.

I had forgotten and was actually surprised that I had only opted for 14x6 Chrome magnum 500's...I was sure I had put 15" on it, they were brand new reproduction rims back when I put them on. I like 15" rims so not sure what I'm going to do yet...just replace the old 14" Goodyear Eagle St's, or maybe look at a 15" chrome mag 500 with new tires?
Click to expand...

You already have magnum style, get an aftermarket look you like instead. Torque thrust are timeless on those and look great, maybe centerlines?
very nice Car. Congrats

What a great looking car! Glad you got it back after all these years. Normally I'm a 15" wheel guy but I think those 14's look great and makes it look truly 1968. I wouldn't change a thing. You might end up dealing with a few oil leaks after all those years sitting but I bet you'll drive the wheels off it complete with family enjoying the top down.

After thinking about it I will most likely just get a new set of 14" RWL tires for the 14" chrome magnum rims for now, I'm going to be stretched pretty thin once I pay for transport, taxes, inspection and registration...probably another $10K for all that. So the new rims and tires might have to wait a year or two. ;) But to be honest I've never been a big fan of aftermarket rims, if I was to put a different rim on the car I would probably lean towards black steel rims with the correct 68 Dodge poverty caps with RWL tires.

Thrashingcows said:
After thinking about it I will most likely just get a new set of 14" RWL tires for the 14" chrome magnum rims for now, I'm going to be stretched pretty thin once I pay for transport, taxes, inspection and registration...probably another $10K for all that. So the new rims and tires might have to wait a year or two. ;) But to be honest I've never been a big fan of aftermarket rims, if I was to put a different rim on the car I would probably lean towards black steel rims with the correct 68 Dodge poverty caps with RWL tires.
Click to expand...

In Saskatchewan, if you can show proof of prior Saskatchewan registration you don’t need to pay tax. If you have proof that the car was registered in your name, you just registered it and carry on.
When we bought our car from the Alberta owner, we paid sales tax and because it was over 25 years old, no inspection was necessary. Just licensed it and drove on.

440 4 speed said:
In Saskatchewan, if you can show proof of prior Saskatchewan registration you don’t need to pay tax. If you have proof that the car was registered in your name, you just registered it and carry on.
When we bought our car from the Alberta owner, we paid sales tax and because it was over 25 years old, no inspection was necessary. Just licensed it and drove on.
Click to expand...

Thank you for that info! I do have prior registration from when I owned it so will definitely give it a try!

Update on the Coronet....

When I was out visiting Wally and the coronet in Newfoundland we discussed transport and he said he would do all the leg work on his end since he has had cars and equipment moved all over Canada and knew a bunch of good people. So after a couple weeks I get home from work early one morning, I work nights, and a text comes through that I have to call this guy ASAP because they want to pick up the car that day! So I make the call, discuss the move and price and then send him the payment, car got picked up June 08 and was on it's journey west!

We worked out the move was only going to come to Edmonton Alberta, since they wanted a $1000 more to bring it BC and there were more back hauls in Alberta as well, so I said I would meet them in Edmonton and bring it back to BC myself for the final leg of the transport. So get the call on June 18th that the driver should be in Edmonton next day or so...he had a non runner on the back that they had to bring in a loader to get off so was delayed 8 hours...finally I get the call that I need to be in Edmonton June 19th between 12:00 to 13:00. So I left my place at 02:30 and arrived there at 12:30...I had only managed to get 2 hours of sleep before going.. 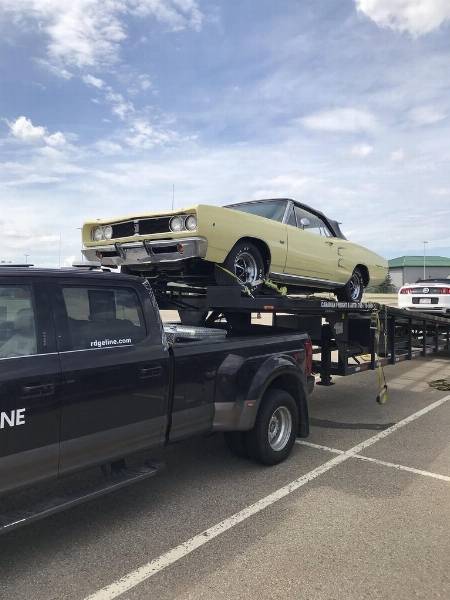 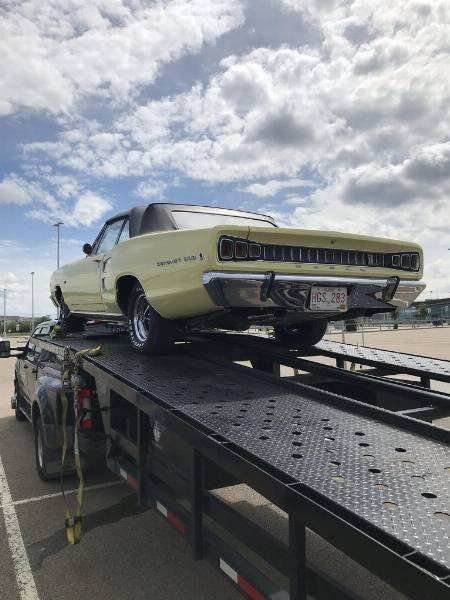 Jarrid was the young fellow who brought the car across the country for me, super nice guy and he absolutely loved the car and thanked me many time for allowing him to transport it for me... 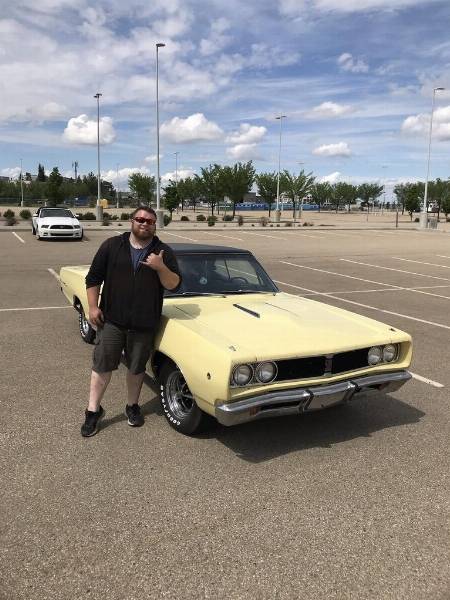 Got it loaded on my trailer... 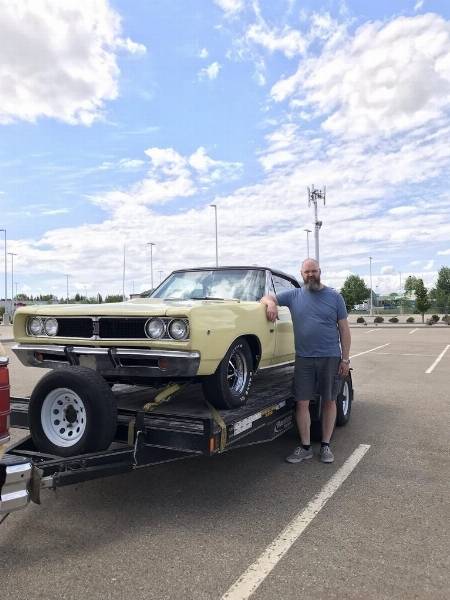 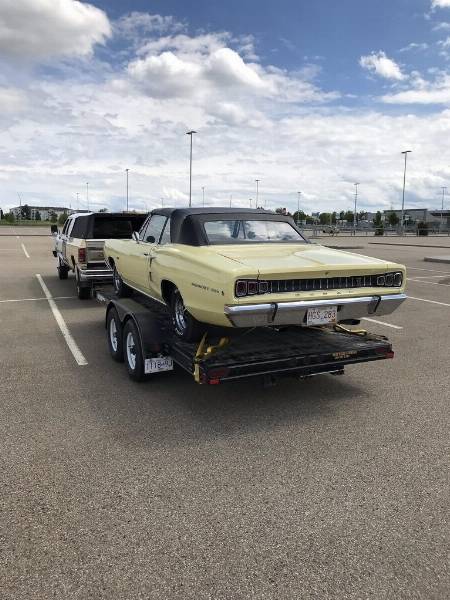 ....and then had to find the one and only tire shop open on a Sunday in Edmonton since one of the tires on my trailer had decided to de-laminate during the 8+hr drive and the outside half of the tire was bulging and had worn off all the tread. I ended up getting 2 tires since I wanted a matching set on the rear axle. Once the trailer was back up and ready to go I decided that I wanted to tape cardboard to the windshield to protect from rocks and debris hitting and damaging it. 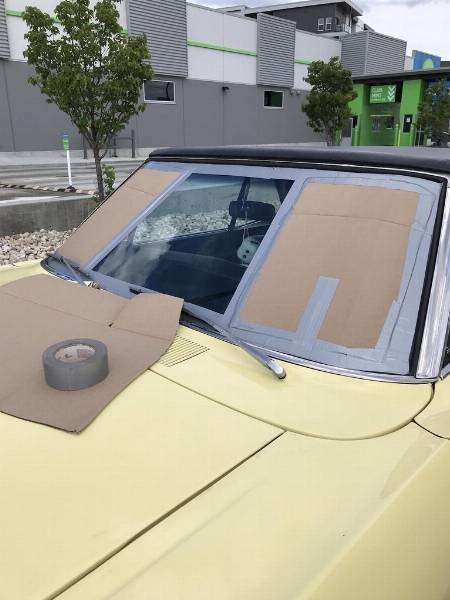 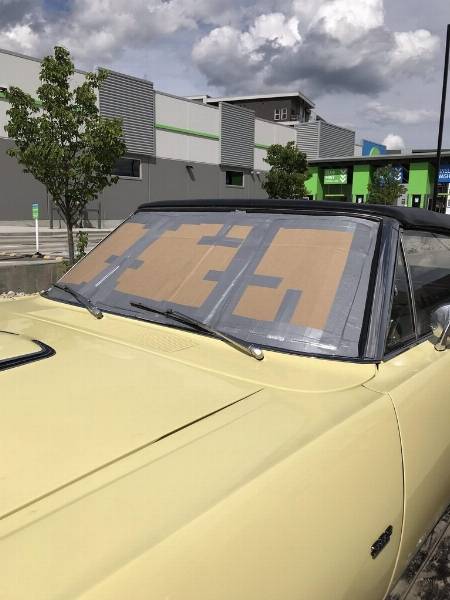 Drive back went well...no issues at all and Ol' Patches just doesn't seem to care if I put anything on that trailer or not, such a dead nuts reliable tow vehicle! 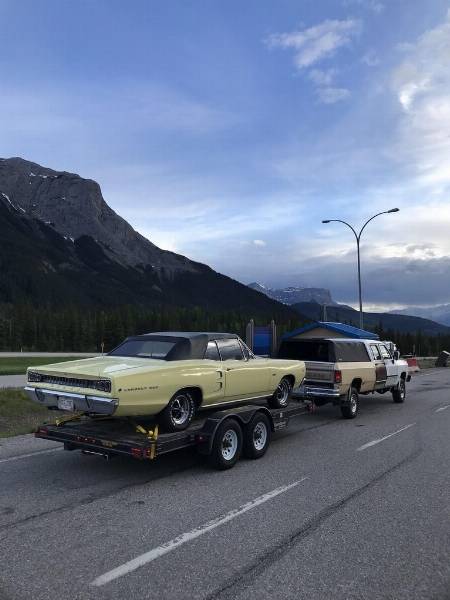 Snapped this when I got up... 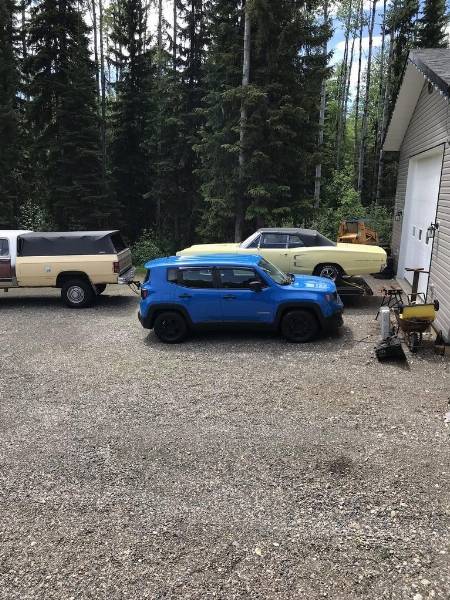 My ramps were to short and the mufflers were going to get damaged so I had to get creative.... 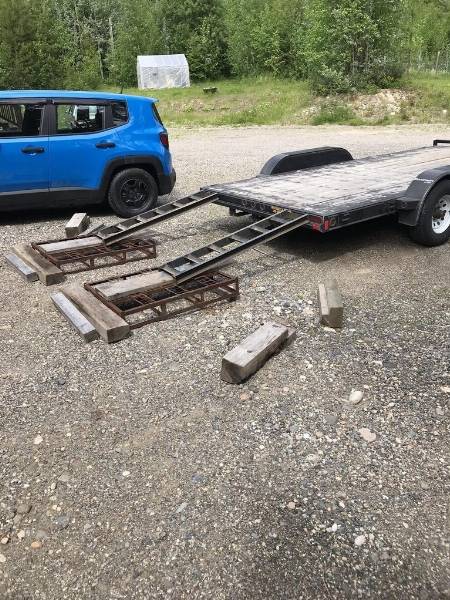 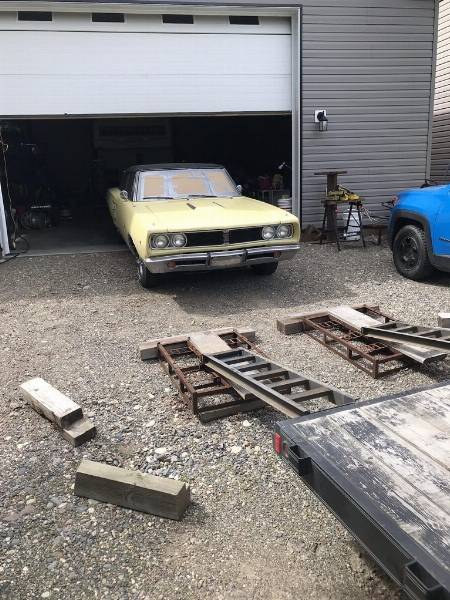 Then spent a couple hours cleaning all the bugs off the front of the car...perils of open transport...and gave the car a quick bath. 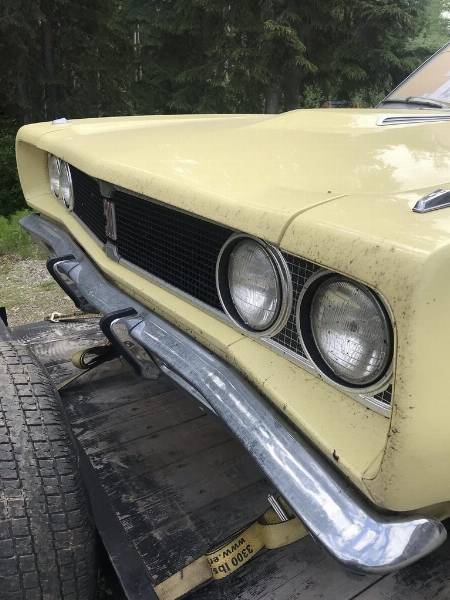 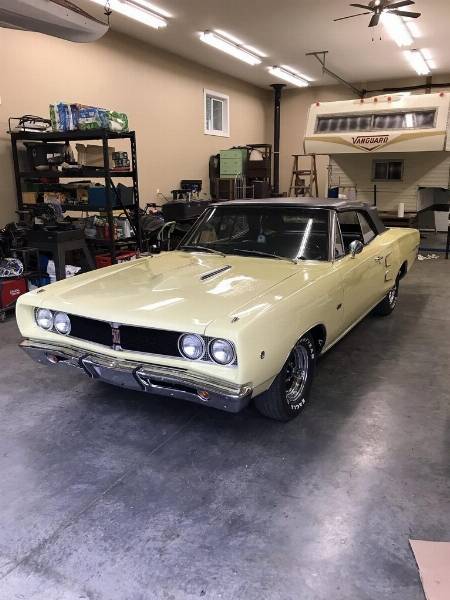 When coming off the transport truck the coronet had barely any brakes...just a spot at the very bottom where they would kind of grab. So I assumed the MC had died over the last 20 years and would need a new one....popped open the MC and found the rear reservoir empty and just a little bit in the front. 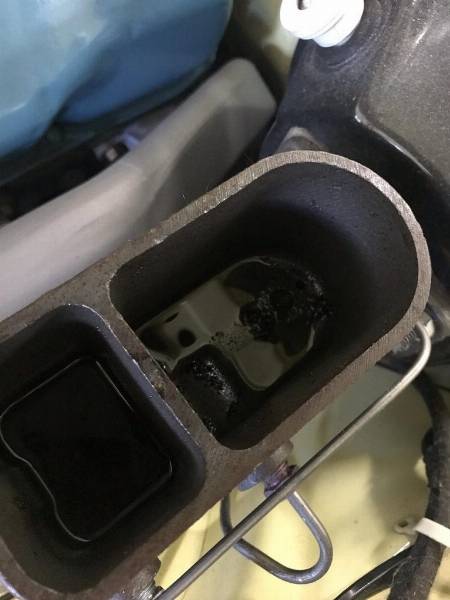 I couldn't remember if I had used DOT 3 or Dot 5 in the coronet...so I went online and found a quick method of determining which one I had. used a syringe to pull out a bit of the fluid and put it in a clear glass cup, then add a bit of water...if it mixes you have DOT 3, 4, 5.1 Glycol based fluid, if it stays separated then you have DOT 5....I had put DOT 5 in. 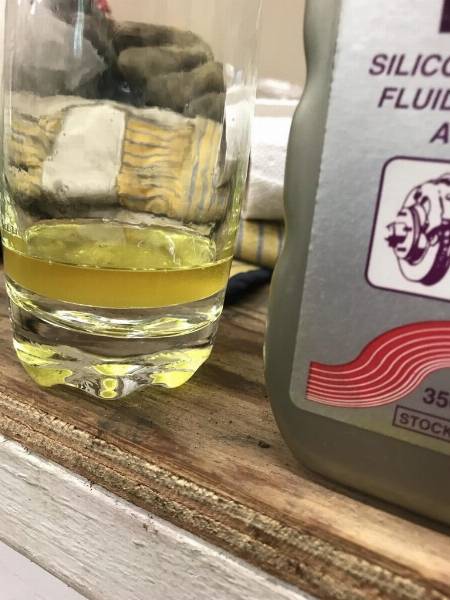 And after a little digging I found three new and sealed DOT 5 containers that I had purchased for the Coronet 20+ years ago! I couldn't believe I still had them! 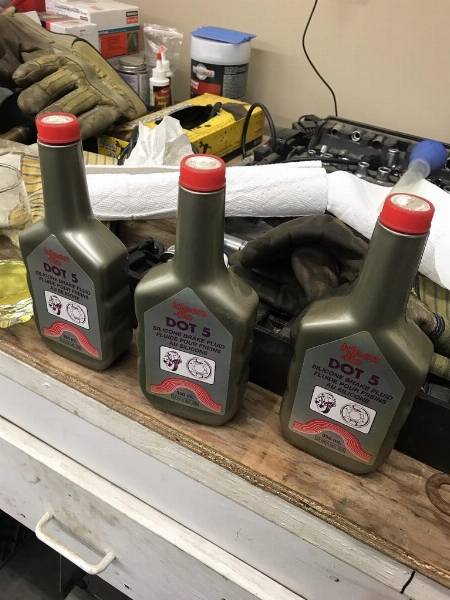 I topped up the reservoirs and pumped them a bunch and started to get some pedal again but will have to bleed the system.

can't tell you how surreal it is to have the Coronet in my possession again, I knew academically that it was mine but actually physically having it home I have to keep checking that it is truly here!

I kept have these weird flashbacks today as I work on it and clean it...I start to feel like I was at my old shop/home and then look up and I'm here at my current residence.

But I couldn't be happier to have it back!

I'm going to start another thread with the history of the car, where it came from and how the restoration went 25 years ago...I have a bunch of old photos I'll scan and share. And then the current state of the car and the work involved with getting it back up to show/cruiser status, and then my continued ownership and enjoyment of the car. ;)

That guy that built Patches did a great job, probably didn't know the loaded trailer was back there. Good idea covering the windshield. Great to see the Coronet sitting in your new shop. Looking forward to your new thread on it TC.

you must have nasty bugs up there, I don't ever remember having one get that blasted when towing with a truck with a topper (which we had for many years).
So cool to have it home!

might have gone by some lakes. When my Dad was trucking, he'd go by a local lake that is right next to the highway and sometimes you needed a scrapper to get the bugs off the front.

When Gypsy Moths were heavy around here (70's). Carry a bottle of window cleaner and paper towels. They're coming back slowly, need a cold cold spell. Oh my oil bill.

Fun story, Those 5.9 Cummins are happiest when they are pulling a classy load.
You must log in or register to reply here.

Not for sale, going to restore it one day
2

So I went to look at this old AMC today
2