Glad to have joined. Actually, I was referred her by a friend of a friend. I believe a 'Jennifer' knows a friend of mine, Joe, and told him to tell me.

Anyway, I live in Bucks County PA, and I have a 1970 Dodge Charger, in GoManGo Orange.

My son and I approached and spoke to the owner, a white-haired woman, in her late 70s, wearing big cataract style sunglasses, and her older daughter. After a short, and very awkward conversation, I left my name and number, and a little note, and gave it to them, to contact me, if they ever wanted to sell it. But, we never saw the Charger again.

I was home and the house phone rang. I heard the machine pick it up, (as we still have our landline). I heard a female voice that I did not recognize start talking... eventually saying “You left a note about my mothers’ Charger "….

I leapt out of my chair, and grabbed the phone, and to my surprise, it was the daughter of the old woman from the supermarket parking lot I had spoken to 10 years ago. Her mother, the original owner of the charger, had died and they were going through her estate, and the Charger was the last thing to go.

I discovered the Charger had been put away in their garage back in 2007 as it started to need too much work for them to afford to get inspected. So it sat. But, her mother had kept 16 notes from different people over the years who expressed interest in the Charger.

Not really knowing what else to do, the daughter decided to try to reach out to these 'local people’, instead of posting it on online, because she didn’t want a bunch of strangers show up to the house and try to intimidate them or strong-arm them on the car. Apparently, out of the 16, my land line number was the only one that still worked.

So, we met up to see the Charger, still in the garage. After the initial giddyness wore off, I could see this car needed a lot of work. I could see the rear was entirely rusted at the lower quarter, the frame rails, the trunk floor, & extenders, inner & outer wheel housings would have to be totally replaced. The front quarters were also rusted & dented a bit.

I knew there was a lot of man-hours in bodywork and a lot in parts. And this was just stuff I could SEE.

But, it was a 1970 Charger 500 in GoMango Orange, Automatic Console on the floor, 318 V8, 1 owner car. This was the first new car their family ever bought, and back in 1970, her father picked the model of the car, but their mother could pick the color, so, she picked the Dodge High-Impact color GoManGo Orange.

The original vinyl roof was in excellent condition. Aside from the usual worn carpet, worn headliner & 2 tired interior front door panels, the interior was in great condition. So, though I knew it needed a lot of work, the inside was really great, and we bought the car for a very good price, with the promise that we were not going to "flip it", or "sell it”.

It took 2 years to do a frame-on restoration. Both the rear quarters needed to be re-skinned, the entire trunk floor was replaced, with all the miscellaneous brackets. Both sides inner/outer wheel housings were replaced. The rear frame rails were cut and replaced. The gas tank was replaced, the rear sail panel and lower valence and the rear bumper was replaced. My garage was literally bursting with enormous boxes that kept coming from Classic Industries and Auto Metal Direct boxes.

After all the parts were bolted on, and the body roughed, the entire brake system was replaced, lines, completely replacing the front discs & rotors and the rear drums, the rear axle needed sealing, starter, water pump, completely new distributor, plugs, wires and we had to rebuild the carburetor twice. Plus all the other random things that pop up.

Then, bodywork, blocking, sanding, and eventually painting it PPG GoMango Orange. We also took the seats, console and plastic parts and refreshed them as well. New carpet & headliner. It’s far from concours perfect, but it looks really good, and is meant to be a driver, not a “show car”.

And, when we bought the car, we also promised the original owner’s daughter, that once done, we would bring the Charger back to them, so she could see their mother's car, restored to its prior glory. And we did. We got it "sort of” done in two + years, and brought it back to the daughter and we did take them out for a ride in it. It was awesome.

Also, upon tearing the Charger’s interior apart in our restoration, we found 2 intact build sheets, in really great condition. So that was a BONUS!

BUT, the most amazing thing that we found was…

As we stripped the interior, we found, was a hand written note, in pencil, that was on the cardboard insert / trunk separator, behind the rear seat. This note was left by one of the assemblers! How cool is that!!!

The note was a little capsule of that night, written to his 2 daughters:

So, this was a note from the actual worker who assembled that part of the car!

It not only was an awesome thing to find, it also verified a close build date! My build sheet has the car scheduled for a Dec 15th, 1969 build date, so that note confirms that pretty closely. That was an absolutely thrilling ting to find.

I tried to track down this worker’s name, based on the clues from the note, but I hit a lot of dead ends, and sadly, it never panned out.

My Charger does have an Instagram page, it’s70_gomango and I’d love some new followers, if you want to see some of the pictures documenting our journey.

So, thanks for letting me join, and that’s my story. I got the Charger I never thought I would, all because of a random note I left a decade ago, hanging onto a land line, and a little luck.

* The day we pulled it from it's 10 year slumber 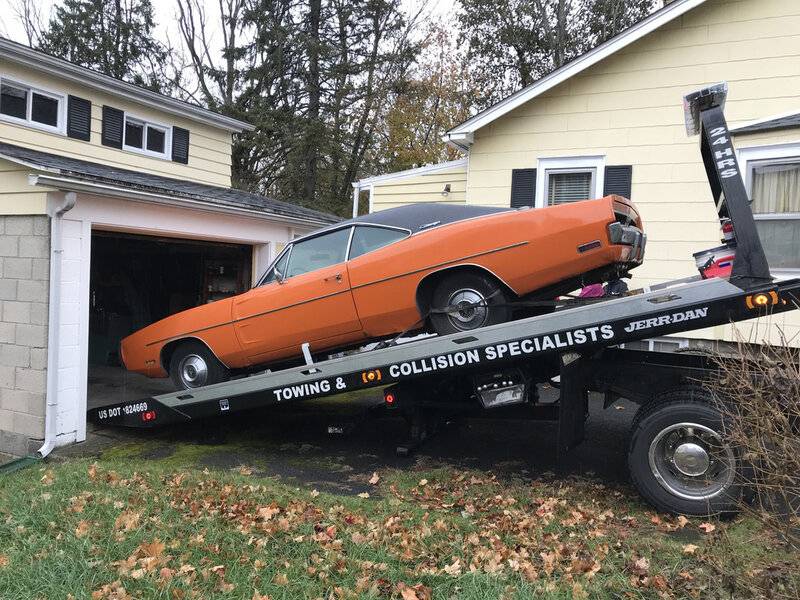 Wow! Good job. I spoke to the original owner of our Charger by phone but never met him.

for joining. Patience is a virtue.

Welcome aboard! Nice story and car. Have you registered it with the 1970 charger registry yet?

Welcome aboard from N.W. Joisey. Thanks for joining & the story with a happy ending and the picture. Best of luck with the car.

Welcome from Alabama, I love the stories that a lot of these cars have.

welcome to FBBO cool story from another Pa guy

F4R/T said:
Welcome aboard! Nice story and car. Have you registered it with the 1970 charger registry yet?
Click to expand...

welcome to the show and I also have a landline. No call yet but glad you got it and now the fun begins.

Welcome from across the river in Camden County: NICE FIND, GREAT STORY, my parents STILL have their landline from 1967, mainly for Drs. Post pics!! Fantastic you got to take it to the daughter to ride in, GOOD MAN!! Hope to see it 1 day at a car show; wear the tread off them tires!! SMILES PER MILE!! GOOD LUCK WITH IT!!

Welcome from the Pacific Northwest
You must log in or register to reply here.

Thanks for the add from Bethany Beach, DE!!!