i am having trouble getting stainless to look good. I have watched the thread on this site (very good) and also a number of youtube videos on sanding/polishing. I start with 240g if scratches to take out, then 320,400, wet sand with 600,1000,1500,2000,3000 and then polish with green rouge then white. then wash with bon ami I stopped using the blk. rouge, it seemed to make it worse. it always has a haze and lines in it when done.
what am I doing wrong??
thank you, charger 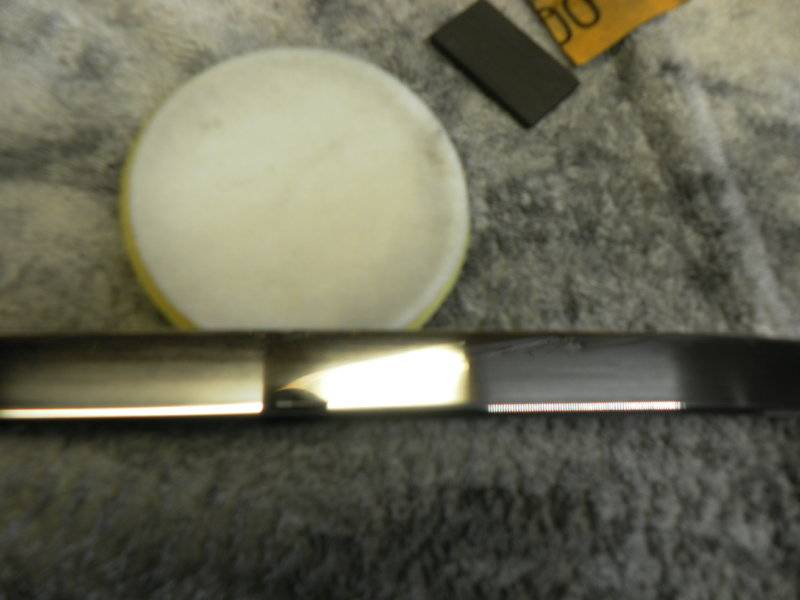 A haze or loss of lustre indicates your final stage is re-scratching the surface.
Your final mop should be very soft and you only lightly buff the work on it.
Only use the mop for stainless if it has ever been used to polish steel or aluminium discard.
Also put the work aside for a hour or two before you clean it to allow a thin oxidised layer to build up. Real soft cloth and I use turpentine.

Are you using a) a different wheel for each compound and B) a different wheel dresser for each wheel? You should be. Also, the stainless trim was installed as a necessity back in the day and stainless was used because it could be installed with a mallet and withstand the impact without damage. Had they been able too, the factories would have gladly used painted trim. The original finish is that of a rapidly machine polished coil stamped in multiple dies. Its not supposed to have a mirror finish. The stainless used does not deteriorate or oxidize over time so if you find an original piece, that's what its supposed to look like - minus any screwdriver gouges !!

Black is ok as long as it’s the 1st compound used and your using a yellow buffing wheel. Then you’ll need to switch compounds and wheels and go progressively finer. I always finish with green and a soft cotton white wheel.

Black will yield a finish close to original. Personally I think this job only leads to disappointment if you go all the way to the finest compound.

5.7 hemi said:
Black is ok as long as it’s the 1st compound used and your using a yellow buffing wheel. Then you’ll need to switch compounds and wheels and go progressively finer. I always finish with green and a soft cotton white wheel.
Click to expand...

Thanks 5.7 Hemi!
I am truly is "Wonder" and "amazement" on all the GREAT work you have performed for us Forum members!
My 1963 Dodge Polara Grill gets many many compliments from everyone who sees it...
Especially when they recollect what it used to look like...

I have found that white rouge on a soft cotton buff wheel is the best last stage.
I never sand beyond 1500 grit.

Thanks for the info Runner 68
P

I use 3m sanding pads with320 grit to start. They cut like 180 without the scratches and speed up the process dramatically. Use the steps discussed above and finish lastly with s good quality metal polish by hand
A

When I am polishing stainless I run into the same problem as you sometimes. When it happens I clean all the wheels by "scraping the wheel" with a sharp edge while it's turning. Also, you could try "sanding" the wheel with very coarse sandpaper(36/40). This removes a lot of "junk". Reapply green compound lightly and try again. I also will try a harder wheel if the soft isnt working and vice versa. Good luck

I have found the best way to polish ani-brite grilles,headlight bezels and stainless trim to perfection!!!

CaswellPlating.com has a pdf download available of their primer "Buff Book," an introduction to Polishing and Buffing, which can be very helpful on getting up to speed. It also has a handy buff and compound chart included. It's getting to be a lost art ...

HEMI-ITIS said:
I have found the best way to polish ani-brite grilles,headlight bezels and stainless trim to perfection!!!

thanks for all the advice. I just put new buffing wheels on and labeled them. used spiral cotton with green rouge, then loose cotton with white, then loose cotton with blue rouge. same result. the haze and lines are on at every step of the sanding and the polishing phases. I did look at original stainless that I have not worked on - it does seem be to shinier but all scratched up. I may have to be happy with what I have. thanks, charger10
S

If you are not happy with the finish practice on an old junk piece of trim until you get it how you want it.
That stainless trim is thin to start off with and you can polish it wafer thin pretty easily.
What I had success with is Scotchbrite wheels (green and then brown) then a soft mop. Final hand polish sometimes.
I have found what works on one metal is not necessarily what works best on another type.
You work the scratches out and lighten the pressure as you get the shine. Sometimes a slight circular motion is need to flatten the scratches. The direction you polish can sometimes gouge the scratches out you need to polish over the top of them.
I would use the scotchbrite wheel until I got a nice sheen with all the scratch lines going in the same direction. Then very light buff with soft mop.
Experiment until you can achieve an acceptable finish.

@charger10 I'd be willing to bet you could have used more basic sanding time with the lower grits (220-400) if polishing and buffing aren't producing better results.

It's a lot easier to show someone how than to tell them, but basically don't move to the next finer grit sandpaper until the only thing you're doing is replacing the scratches you just made. Once you get good clarity and reflection throughout, then start with the buffer and compounds. Does that make any sense???

I admittedly polish a lot more aluminum than stainless but the general principles are the same. Just a few tips off the top of my head ...

Do not use variable speeds, especially if you're working on pieces of the same set. The results will be noticeably different. Modified bench grinders are awesome and cheap buffers on smalls. Caswell Plating has consumables but they're widely available on the internet.

Hold the piece firmly but gently. Do not press it so hard against the buff that it bogs down the motor; let the machine do the work -- you are merely its guide. It WILL get hot regardless of your pressure so good gloves are mandatory. A smock is a luxury (an old long sleeved shirt put on backwards is great -- be sure to button the sleeves) but a good face shield is not. Tie long hair back. (Mine's a 1 3/4 hp with 3650 rpm that earned my respect years ago. Learn from my mistakes lol!!! )

Buy a buff rake. It's worth the twelve bucks. This does not mean you can then mix and match your buffs and compounds! It just keeps the good buff material from getting all caked up.

Don't try out your buffer near anything of importance. Even practiced craftspeople catch an edge now and then ... and that piece will leave your hands at what you'll be certain was lightspeed. It can and will hurt you, and anything else within shooting distance. The buffer fluff and excess compounds will also make a serious mess and absolutely create a fire hazard if left to accumulate.

Some Medium reducer on a very soft rag (cloth diapers are ideal) will help clean cooled compounds off the metal. It seems they wipe off easily while the part is warm but, as well mentioned earlier, will remove that ultra thin layer of oxidation.

If I think of anything else I'll edit this post. Any other handy tips out there???

What cudachick says, I bet you are not getting the deep scratches out, and they will continue to show until you get good even sanding at the coarser grits and work your way up. I know because I went round and round with the stainless trim piece on my windshield, and I found that I was not going long enough sanding at the coarse grits, but when I thought I was done at one level, I sanded some more, and then when I thought I was done, I sanded some more, it takes some time, but if you get that then the rest will come to be much better result.

This was my end result I spent maybe 40 hours on this, its a large piece. 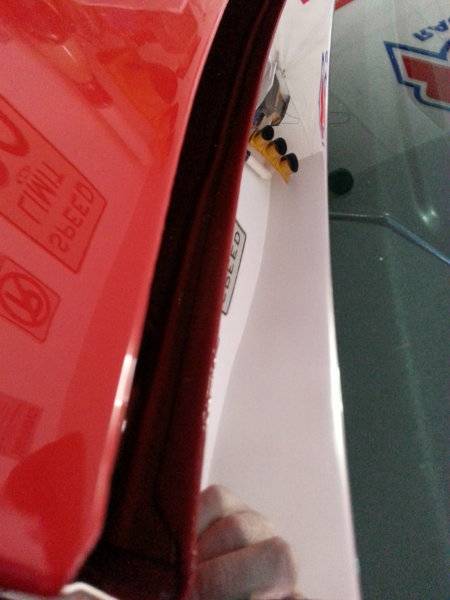 Looking for pinchweld trim molding. Or suggestions on how to...
2

Brake light comes on when I press brakes
2