Well I for one give you a lot of credit for doing your own work. That’s what a hobby is all about.
as stated above , don’t bash mopars to mopar people.
a simple rule of thumb…..right?

The GM "body on frame" cars had removeable front wheelwells that intruded into the engine compartment LESS than the Mopar and Ford models. Many of them had FRONT steering boxes and linkage that opened up room for headers and spark plug access. They also had heavier lower control arms, alignment shims for the UCAs, longer sway bars, shitty starter mounting, engines with so little nickle, the bores wore almost as fast as the brake pads and other engineering shortcuts.
I will readily admit that from an engineering perspective, Mopars were superior BUT the torsion bars and rear steer do get in the way of what should be simple jobs. Headers on any LA or B/RB Mopar is sometimes an all day project. Spark plug changes with headers on anything but a Hemi is not a simple task either. I have had numerous Camaros, Firebirds and a couple Chevy trucks. ONE Ford. They all have their quirks but I've learned to adapt and improve.
Last edited: Jun 26, 2022

Kern Dog said:
Spark plug changes on anything but a Hemi is not a simple task either.
Click to expand...

68BabyBlue said:
One theme runs through these posts that resonates with me - all vehicles have their issues with tight spots, and a skilled mechanic finds ways to manage that. In 1979, I jumped from doing none of my own mechanical work, to wrenching full time on a 1971 International Transtar 4070a cabover when I became an owner-operator for the first time. It always came up that the nastiest work was at the end of a long day, and dispatch had just given me the best load of the month for the next day's run. The company co-owner who ran the shop, and senior drivers, all taught me shortcuts and tool tricks to speed up the process. Big trucks share the space problems of cars, plus the parts weigh far more. I still wrench in the field when I have no other choice, but if possible, I pay others to do this in the twilight of my career, and respect those who can do this work well more than any other professional. View attachment 1304330
Click to expand...

You need to hit a truck wash!

Michael_ said:
In general no. But if that would mean effortless repairs then yes.
I dont know the size difference in a sbo/bbo vs. big block mopar (440hp in my case) but my 72 cutlass is shorter than my 69 charger while still having more free space under the hood. (same goes for the chevelle ls6)

Well i need to stop talking about how great the gm a body platform is according to my opinion. (At least in this thread)
Obviously the b bodys are great aswell. As has been pointed out both have their strengs and weak points.
I was just pissed of yesterday so i needed/wanted to vent.

But really from the late 60s and 70s american vehicles:
You guys think the b body/mopars in general are the easiest to work on? I still have a somewhat hard time believing that.
Click to expand...

Most of us understand that (needing to vent )
Good for you diving in and doing the job. Out in the drive and not having grown up working on these cars. Many good mechanics post on this sight but many of the ball busters on here can't or won't even do simple tasks and maintenance.
Your on it , just keep working, I don't care if it takes 4 days. When your done you will have learned a new job.

Now that this thread has calmed down some I am throwing in my 2 cents on the well designed mopar engine’s of the day. The bb motor was designed to be somewhat user friendly at the track between runs. Dry intake only 8 bolts away, external front mounted oil pump for quick access to either change pressure relief or the entire pump. Distributor up front and slot drive so no gear to mesh, saving time. Water pump relatively easy to replace and so on. Designed to be at least somewhat user friendly.

Just my experience and opinion and that’s all.

All cars can and do have some real bitch things to fix. I use to enjoy working on my own cars when I was younger, not any longer. All I can say is if it's that miserable of a job for you, you need to hire it out to an experienced shop

Seriously, Calm down, and don't waste our time with rants of ignorance. It can take one bolt on any project to make a project go sideways. It can happen on anything!
...and USUALLY does!
I have a 71 gm A body with a 455 olds. Talking about how much more room there is then a B body is ignorant. I have never known the front clip to come off a cutlass to work on it...unless it was a POS and it didn't matter if you scratched it.

Ray70Chrg said:
Right after you've shouted every bad cuss word you can link together 5x, have a beer and take a break.
Click to expand...

I agree with everything except the beer - I'm not fond of beer and I don't make a habit of drinking alcohol. I try not to cuss at my cars because they are like my children and I love them.

Ray70Chrg said:
You'll be surprised at how many things you'll come up with to tackle the job differently.
Click to expand...

I arrive at this point when I realize I'm taking the wrong approach and thinking it's the right and only one. Many times I think of it as the car is trying to tell me something and I haven't been paying attention. I am probably the least experienced person on this forum and have received a lot of really good help from these members. There are also a lot of good videos on YouTube.
Somehow, I have to get under my 4 speed and take the shift linkages off because it's stuck in 3rd. (The fact I was able to drive it home is a tribute to Chrysler and the A833 transmission). I've never done this before. I also have to get around a set of custom headers. It's going to be interesting. Probably involve some profanity...and bruised knuckles.

Ray70Chrg said:
If your heart is still pounding in your chest
Click to expand...

That is why I have my Mopars - the heart pounding as a result of having exciting vehicles. My BP rises just looking at them.

Good luck getting to the nuts that hold the motor mount onto the frame through the spring pocket on a A body GM. Obviously looking and not doing.
If you seriously think pulling a front clip to change a motor mount makes it easier your delusional.

Hey what's that down in the valley? A starter motor? Sure nuff. Leave it to Cadillac. I call them GM's experimental division and get a lot of laughs with the GM techs. And you thought Mopar engineers had rectal cranial inversion! Oh by the way, it's a Northstar engine. Dumb asses! 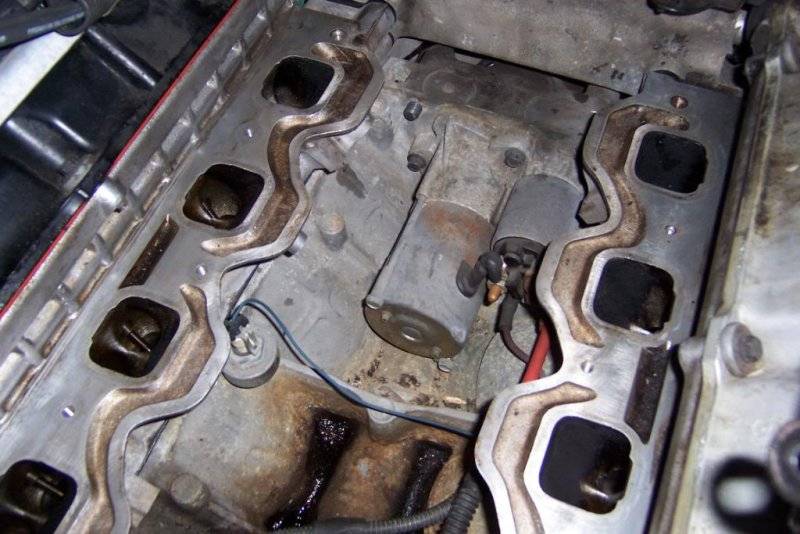 Holy crap !
Did not know that

hunt2elk said:
Michael would have to give us all the particulars, but I believe this is it. A very nice unrestored 69 Charger R/T. If I remember correctly it was pretty much original and also the reason it is needing some attention mechanically. I remember when it came up for sale on here and thinking that it would be a great car to own.

What's he selling it for?

Lefty71 said:
Haven't you heard?? Those stupid engineers designed them with exploding transmissions too..... Just send that pain in your ass over here and I'll deal with it.
Click to expand...

I gladly pay my favorite local shop to do anything needed on our Hearse and that vehicle is just turning 35k and has the Nutstar motor. I made it clear to my wife when we acquired this beautiful vehicle. Never a problem with that.

Speedbird said:
I think the important thing is that Chrysler motors (and cars) needed working on less.
Or less work , which ever way you phrase it.
Click to expand...

I had the full dash from my 69 Charger sitting in my trailer to take home and work on. A guy who is a big Camaro enthusiast saw it and made the comment: That's a great idea! I didn't know what he was talking about because I don't speak Chevy. He was referring to the dash frame being all one piece...apparently Camaros are in multiple pieces which he said is a pain in the ass to work on.
Who came up with the gear reduction starter motor to make it easier to kick over their big blocks? How about the 727 TorqFlite transmission? One of the finest automatic transmissions in the world. I was at a local cruise in with my sweet baby, 69 Charger and some guy with a GTO asked me if it ran as good as it sounded. I thought it was a weird question but he told me his car sounds good but runs like crap. He made some comment about his automatic trans but I really didn't catch it. I told him I can bark the tires in every gear and it runs great. An honest Chevy guy told me their automatics suck.
When I left the cruise in, I drove up the street, turned around and NAILED IT. Burned rubber, went a little sideways then peeled out...no problem.

QOTHL said:
What's he selling it for?
Click to expand...

He isn't selling. I was just saying that I remember when the car came up for sale a couple years ago and Michael bought it.

It used to be Oldsmobile that was the experimental division...GM's first automatic, first OHV V8, first front wheel drive...

But that looks the same as my Lexus engine. At least it doesn't ever get wet. But at over 400,000 km. it also hasn't needed to be changed. 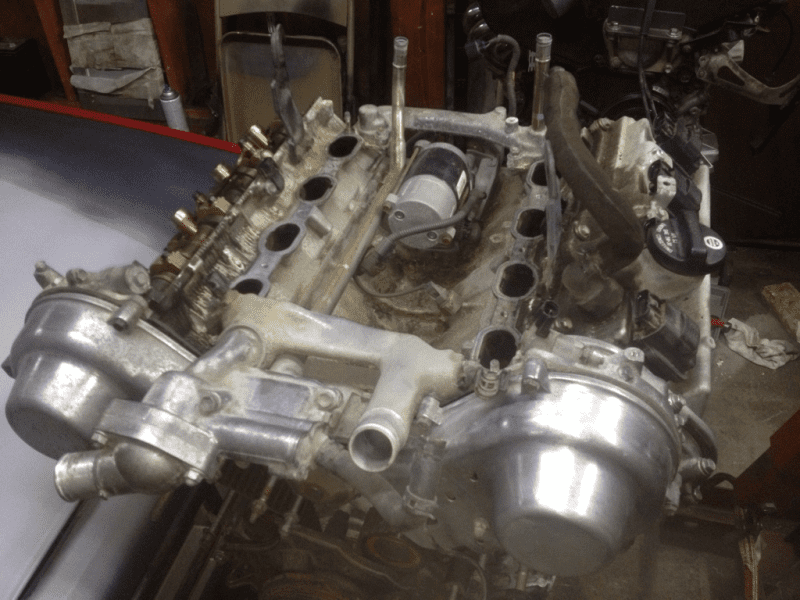 I am placing bets with my wife on how soon we will need a starter on our Buick Envision. Every time you stop so does the engine. Saves gas but shortens starter life for sure.
You must log in or register to reply here.