"Straight Shot" crank main bearing oiling. Chrysler does it, Molnar & others don't. I have ?s please

The explanation I got from Ed at Molnar is that the length of the stroke (4.5") affects the timing of the oiling. It may also have to do with the rod bearing as well. I was concerned when I was told that the oil passage in my Molnar crank is not "straight shot" like Chrysler uses.
I don't know enough to wrap my head around it, but the caution that the builder (not my builder) gave was that it could lead to oil deprivation of a portion of the crank main bearings, and centrifugal force played a negative role in that.
Although I got the "not our first rodeo" and "Ray Barton" uses Molnar, and other similar replies, that seems a bit dismissive to me. To his credit, Ed at Molnar also went into some detail, which I related as best as I could. In the end, I accepted Ed's more detailed explanation, and that my builder is experienced in Mopar and even Bill Mitchell aluminum block based stroker engine builds, but I would like to know more from any of you on this topic please.
If any forum members can enlighten me further, I'd appreciate it.
Last edited: May 21, 2022

news to me...thx for bringing it up

I understand what "full grooved mains" are, but again, the connecting rod is involved as well.
I did find an article by Reher-Morrison on straight shot oiling being the desired method. It seems as though cross drilled oiling is what "the other" method is that they were comparing it to, and said in no uncertain terms "do not buy a cross drilled crank".
For what it's worth, Ed at Molnar said their cranks are not cross drilled. THAT is where my understanding is lacking, because I don't understand what method they are using, I just know for an absolute fact it is not straight shot.

Chrysler has built Millions of engines that way for many decades.
But they are not Racing engines. They are passenger cars needing to have a factory warranty for many 10,000 of thousands mixed purpose miles.
Just like buying anything custom, you can get whatever you are willing to pay for.
Off the shelf birthday cakes or custom ones. One is $15.00 the other could be $100s of dollars. Your money ... A lot of people are just looking for peace of mind.
Your total build will really dictate what you do. Street engine. Go stock and spend your money on good machine work, a cam/ heads/intake that work good together. Looking to go fast ? Like the saying goes "Speed cost money, how fast do you want to go ?"
G

My understanding is that SS oiling provides more reliable oiling than the older cross drilling method. The CD method allows the rod brgs to starve at higher rpms because the centrifugal force on the oil in the main brg journals keeps the oil away from the feed port to the rod brgs.

MoparLeo said:
Chrysler has built Millions of engines that way for many decades.But they are not Racing engines.
Click to expand...

Just to be clear, the straight shot oiling design, which Chrysler uses, IS the better engineered solution, especially in a high winding race engine.
CROWER states boldly 'straight shot oiling' in the basic description of their crankshaft, but they cost 3 times what the Molnar crank does.

Molnar oil passages are neither straight shot or cross drilled. The hole is machined from the rod journal and from the main journal. The two holes intersect each other. It takes an extra machining process to drill the crank with the angled outlet passage to the rod bearing. If it wasn’t better, why would they bother? They could just drill it straight thru?
Doug
Last edited: May 22, 2022

biomedtechguy said:
Ed at Molnar said their cranks are not cross drilled. I don't understand what method they are using, I just know for an absolute fact it is not straight shot.
Click to expand...

dvw said:
Molnar oil passages are neither straight shot or cross drilled. The hole is machined from the rod journal and from the main journal. The two holes intersect each other. It takes an extra machining process to drill the crank with the angled outlet passage to the rod bearing. If it wasn’t better, why would they bother? They could just drill it straight thru?
Doug
Click to expand...

Thanks Doug,
THAT is what I was looking for!
Would anyone say that eliminates the centrifugal force oil starvation issue at high RPMs?

You don’t want cross drilling, it aerates the oil. The oiling on a molnar crank is just fine for about any application you can think of. The nascar guys got away from cross drilling for that reason. A proper lead in on the main oiling hole is all that’s needed. This is all I would do on about any application I could dream of. We used to build 2k hp turbo motors with the same set up 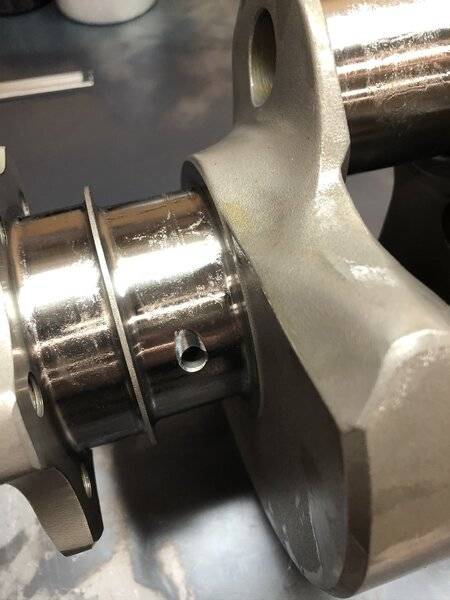 68 HEMI GTS said:
The oiling on a molnar crank is just fine for about any application you can think of.
Click to expand...

Thanks.
I appreciate all replies, and I am mainly looking for an understanding of the oiling pathway that the Molnar crank uses. Doug gave me some insight, and the most important part of his post was confirming that the Molnar crank is not cross drilled, which was also what I was able to understand with my limited grasp from what Ed at Molnar said.
I don't mean this to seem unappreciative, but I have already heard about "big name builder uses Molnar" and "I have used Molnar in blah blah more powerful, demanding engines than yours". I get that point, but I am trying to get an understanding as well.
Here are some of the comments my builder made when I expressed concern about the Molnar crank oiling:
"You paid for today’s fixes for all these issues with a stronger, revised, priority oiling system block coupled with dual line oiling making the 2000 hp with twin turbo’s power today.
Your not going to make that engine breathe hard. Figure my Aussie friend at an 8 second quarter doing 8000 rpm for two years, never dropped the pan, checked and found rocker adjustments ok one time."

better than I could say it...
beit a MoPar or any Brand X

I used Callies mostly, for aftermarket,
I haven't bought any in about 10 years now
I don't think I ever used a 'Molnar stroker crankshaft'

I agree, and honestly, even after my own research, and posts from knowledgeable forum members with 1st hand experience with Molnar crank and rods,
AND...
a second phone call I made to Molnar today (spoke w/Ed again), just to see if I could take the info I've learned since last week's conversation with them, and get a better understanding, maybe have something I could share, THIS is what I'm left with:
Per Ed at Molnar today, the engineering of the oil passages in Molnar cranks it is "straight shot" oiling, BUT they have what he called a "shallow pocket" machined in to make the long stroke crank work better (again, I am pretty sure the 'better' part refers to main and rod bearing oiling, from a timing perspective, how they interact when they line up, and complete coverage of the bearings surfaces) and not have tooling breakage issues. He emphasized, again, that their cranks are not cross drilled.
He also said he had just spoken with Ray Barton today about this, and Ray told Ed to give me his cell phone number. I will take him up on that, but I was driving and honestly I'm satisfied. Basically Ray said he's used a thousand Molnar crank shafts and obviously has full confidence in them and the results he's had speaks for itself (and we know what Barton builds and he has what seems to be a legendary reputation).
So until or unless I have something to post that makes it even clearer, more detailed yet understandable, I don't have anything else to add except that I'm excited and fully confident.
Parts availability is a consistent problem with the engine builders, and that really SUCKS when you finally get the "bucket list" once in my lifetime engine building project going, and I'm doing all I can to keep it going. John at Southeastern Performance is a dealer for many well known product lines, including Trick Flow, so he assured me that I could get my TF270s from him, that he would have a set in time. My T&D rockers are coming from Michael Beachel at B3 Racing Engines. His proprietary design will take care of the valvetrain geometry without the need for spacers like he uses to correct other rocker arms (other than the ones they make specifically for him).

Sort of sounds like a scoop entry to the main oil hole. We did that at Scat. I looked for a picture of his main surface but couldn’t find one. But it sure sounds like they do extra work on the entry side of the oil hole. We also did a high speed oiling system for NASCAR cranks. It consisted of a shallow hole on the main that intersected a fore and aft drilled passage which joined the passage from the rod journal. The short passage eliminated the oil from fighting the centrifugal force of a 9800 rpm crank trying to throw the oil right back out of the main hole. The short entry passage had less mass and distance to get to the flat hole and rod oiling was vastly improved.

Gunner1 said:
Sort of sounds like a scoop entry to the main oil hole.
Click to expand...

Thanks. I can't say, but I wouldn't be surprised if it is that, or something similar. I would tend to believe that a company selling a product that according to numerous posts I read as part of researching Molnar has "perfect bearing surfaces for clearance" to 0.0001 "with no taper"...I'd like to thank that an issue so obvious to those who are "in the know" and as important as oiling critical bearings under performance conditions would miss or disregard the best oiling engineering.

We played with that lead in on the mains at livernois. We even cnc’d them in. There was a point where it became so extreme it turned into its own oil pump. You could see it on the dyno with the oil pressure gauge bouncing. Turned out a little lead in is good. A really deep serious lead in wasnt.

I’ve only heard good things about them. I think it will be just fine.
You must log in or register to reply here.

URGENT replies please. ANYONE with a Hydramax throw out bearing kit, I have ???s