The cold hard truth about electric vehicles in winter

There's a vehicle battery life chart that I can't copy in the link below the article....


More Americans are opting to purchase an electric vehicle, but some EV owners are surprised to find out how much their car's driving range is compromised by winter weather.

Why it matters: Getting over the hurdles of buying an EV — the higher sticker price, knowing where to charge it or the fear of getting stranded — is hard enough.

If your car doesn't live up to the EPA-estimated range that was promised, it could undermine confidence in EVs and even deter potential buyers.
Case in point: In January, Margaret and her husband took their first road trip in their new Mustang Mach-E from Washington, D.C., to a cabin near Wardensville, West Virginia, roughly 110 miles away.

Their car has an EPA range of 300 miles, but in the chilly weather the estimate before they left home was only about 200 miles, so they had to build in a stop for recharging.
Reality check: Most electric vehicles experience some loss of driving range in cold weather.

In Norway — where half of all new cars are plug-ins — tests show that EVs lose about 20% of their driving range and take longer to charge in cold temperatures, according to the Norwegian Automobile Federation.
AAA found the loss in driving range could be as high as 41% with the heater on full blast.
Consumer Reports urges EV buyers to opt for a larger battery to account for unpredictable weather.
What they're saying: “Batteries are like humans,” Anna Stefanopoulou, director of the University of Michigan’s Energy Institute, told Wired.

“They prefer the same sort of temperature range that people do. Anything below 40 or above 115 degrees Fahrenheit and they’re not going to deliver their peak performance," according to Wired.
Some EVs do better than others in the cold, however, according to battery analysis firm Recurrent, which uses data collected from EV owners to create "battery health reports" on pre-owned EVs.

The company analyzed the real-world winter driving range of thousands of electric vehicles and found the Tesla Model Y retained most of its EPA-rated range in winter.
Tesla has developed more advanced thermodynamic systems, including a heat pump to warm the interior, Recurrent CEO Scott Case tells Axios.
Between the lines: Cold temperatures slow down the chemical reactions in battery cells, which saps range and increases charging times.

Without heat-producing engines, EVs also have to siphon battery power to warm the cabin.
The intrigue: Your driving also affects your EV's range. If you drive with a lead foot, or you like to crank the heat, your expected range will be less.

Ironically, driving only a few miles a day will also shorten your range estimate.
There are steps EV owners can take to maximize their cold-weather driving range, Donna Dickson, chief engineer of the Mach-E, tells Axios.

Start the vehicle while it’s plugged in to allow the battery to warm up.
“The key is warming that battery up," Dickson said. "That pre-conditioning helps so much because it gets it to a temperature level that works efficiently.
What to watch: Ford is considering a software update that would give drivers more insight into how to improve their vehicle’s range.

Read that this morning RC. I've always known that batteries power diminishes when very cold as the become very viscus internally. But for these new fangled batteries, I don't really know much about them...cr8crshr/Bill

Oh well, my gas powered vehicles get less range in winter and with lead foot driving
too. And if you only drive a few miles a day, the range is irrelevant as it's probably plugged in all night.

The electric heat doesn't help with range either. 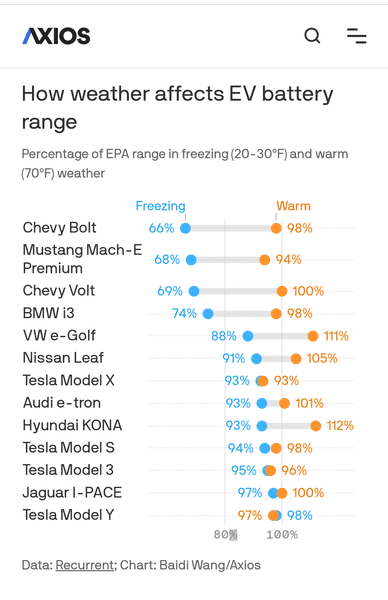 I was talking to a technician just this morning who had a Telsa on his alignment rack. He made the reply that Telsa won't even work on their own cars. The alignment was way out on this particular new vehicle and he had to make it right.

Another statement he made was about "someone" having the ability to shutdown the Telsas (making them inoperable) when the power grids are out so they can't be charged???

According tho that axios chart teslas seem to be within 5% and one even does better in the cold.

Interesting that some are over 100% and I bet that's because the company averaged cold weather operation into the estimate.
J

Ok this is about range and how cold affects it, but do you know what kills battery life? Heat.... Since moving to Florida I have noticed the slow crank warning of a battery going dead seems much sooner now...... I recently read a tech bulletin about this so its not just my experience...
Will heat affect the the life of the EV batteries too? This would concern me much more with the cost of battery replacement....
Last edited: Mar 4, 2022

Something I’m really dreading is the EV mandate coming. In CA it’s 2030. At that point you will not be able to buy a combustion engine new car. You can continue use to drive what you have or buy used but nothing new. And I can only imagine what the cost of gas will be then. It’s $5+ now what about when everything goes EV. I’m reasonably ok with change - but not this one. I remember when young Bushie told us in his first State of the Union that we’d all we driving hydrogen powered cars way before now. I used to like the guy until I discovered he was just another scumbag with disguised bad intentions.
D

My main concern is safety in extreme cold an hot weather if you are stranded for any period of time due to weather or accidents - these will kill you
Not a hazard I'm willing to subject my passengers or myself to, period!
J

GetX'd said:
Something I’m really dreading is the EV mandate coming. In CA it’s 2030. At that point you will not be able to buy a combustion engine new car. You can continue use to drive what you have or buy used but nothing new. And I can only imagine what the cost of gas will be then. It’s $5+ now what about when everything goes EV. I’m reasonably ok with change - but not this one. I remember when young Bushie told us in his first State of the Union that we’d all we driving hydrogen powered cars way before now. I used to like the guy until I discovered he was just another scumbag with disguised bad intentions.
Click to expand...

NOT trying to make this political, but that is EXACTLY what Jen Psaki said today... ALL monies going to green devices, NO monies towards carbon based energy... Looks to me like the green devices are still 20-30 years off and we will have no oil for energy??? Glad I am old..........

I drove a Tesla cross-over in ludicrous mode......MUCH faster than either of my nitrous cars.....damn fast

No worries! When global warming starts letting people grow palm trees in Canada.
Then the only thing that will reduce the range of having a EV is running the A/C to keep cool! LOL!
S

When there's no more gas my coronets and satellite are gonna look really funny with a wood gassifier in the trunk.

Richard Cranium said:
Without heat-producing engines, EVs also have to siphon battery power to warm the cabin.
Click to expand...

I plan on putting a wood stove in mine and keeping the heat up with coal.

I've been saying lately, I feel like I've been fortunate to live in the heyday of the car, specifically driver-operated musclecars. I have no fondness for "before or after".
You must log in or register to reply here.