Happy to be here! I grew up around B-Bodies my whole life. Here's my dad's "triplets" for your entertainment. Here's a quick breakdown: 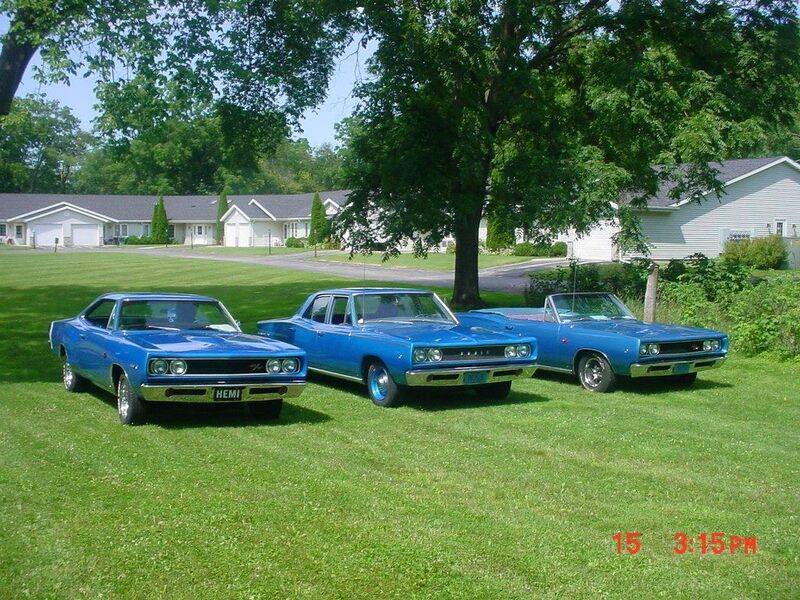 Welcome from Illinois JimmyD!! That is a beautiful trio of Mopars. Post some close-up pix of them if you will.

Welcome. I take it B5 blue is his favorite color? Not a bad choice at all.

dad has a cool Coronet fleet

65Bel said:
Welcome from Illinois JimmyD!! That is a beautiful trio of Mopars. Post some close-up pix of them if you will.
Click to expand...

Here's a few pics of the girls. About 5 years ago, I had a 1/24th scale model commissioned for my dad. Attached a few pics of that - they even recreated his keychain!. Also - a good friend of mine sent me the collage pic below - for many years, the only time I was able to drive the "baby" (the 'Vert) - was during my home town's parade. (Because I couldn't go faster than 10 mph

Welcome from NY.
Wow never seen a collection of 68's like that.

I have 2 66's but one's a Dodge and one is a Plymouth.
And oddly enough they are different colors as well.

Welcome from Alabama, nice collection your dad has.

Welcome aboard from NJ & thanks for posting pics of the "Blues Brothers"!

Welcome to FBBO from Ontario, Jimmy. That is a fine collection of '68 Coronet's your family has. It doesn't look like you are going to have to do much parts searching.

Welcome from Fredericksburg, VA. Beautiful cars! Looks like blue is a popular color in the household.
You must log in or register to reply here.

C
Thanks for accepting me

Picking up where he left off

New here, not to B Bodies

Update on my GTX