I have read most all posts on this site that have the words “torque converter” in them, I have learned a lot, enough to realize I need some advice.

Another mess I have created…
I have been fighting a drive line vibration for about 2,000 miles; I have had the drive shaft rebuilt & balanced twice, a new tail shaft seal and two transmission mounts… Yes, I did pay to have the same thing done twice, not expecting, but hoping to get different results. It turned out that most of the work done on the Van addressed the worn parts caused by the problem but not the problem. Finally I told a shop to focus on the torque converter/ flex plate area, they concluded (without pulling the transmission) that the problem may be that I had the wrong flex plate but was unable to confirm the status of the torque converter.

The Vans History…
I have owned my 1973 B100 van for 44 years, it was born as a 318 / A230 3 speed column shift, sometime in the early 90s I had a shop convert it to an automatic (727), I did not ask for any info on the donor transmission, then somewhere around the year 2000 I overheated my 318 to the point that I no longer trusted the block; so I bought a high mileage running van with a 360 / 727, I had a shop rebuild the 360 for me, I did the R&R myself, this was the 3rd time I had R&R’d my engine (over 350,000 miles on the chassis) so I felt I was experienced. The last two 318 rebuilds I had the engine balanced and a RV cam installed, otherwise they were stock rebuilds, I was (and still am) convinced that balancing is the way to go. Of course I asked the builder to balance my 360 but we really did not discuss it too much, the only thing I remember him mentioning is sending the pistons out to get them matched. I was aware that the 360 was externally balanced but I guess I figured a balanced engine is a balanced engine… My ignorance is now plaguing me. The builder had a good reputation, he built racing engines for a living and was applying to multiple NASCAR teams, I asked him for an RV cam but when I picked up the engine he said he just could not get himself to put such a mild cam in, so he went “one step” past an RV cam (I have no idea what he installed) but it does have a nice mild “rumpita” “rumpita” sound. I also replaced the stock 2 barrel with an Edelbrock intake and a 650 cfm carb. I had the torque converter rebuilt, picked up the engine and put everything back together. I apparently used the flex plate from the 318 and I have no Idea what torque converter I used, was it from the donor van? or my old 318 torque converter? I had about 150 miles on the vehicle when I started to deal with an illness, I do not remember a vibration issue but I am now guessing it was there.
The van got very little attention for many years, in 2012 I started to recover from my health issues enough that my interest in my van got me going on the Van’s resurrection, I was totally surprised how good the van drove after being dormant for so long (all new hydraulic fluids, rebuilt carb…). I joked that the only issue I had was that the transmission would not shift into 4th gear. Since then I have been attempting to correct the vibration issue while driving the van about 300 miles a year.

Back to Today:
A good friend has offered his help and the use of his lift to replace the torque converter & flex plate, it’s a one day proposition and I figure I would show up with all the parts and go to town, the big problem is that I am unsure what parts to buy, I am looking for DEPENDABLE STOCK performance but I have the following questions:
I thought about taking it to a shop for this work, and they should answer all the above questions, but I am really “****” about doing this repair correctly and I simply do not trust that a shop won’t just slap on whatever fits (kind of like I did many years ago). I will be buying my parts from a local auto parts store as I think I will have to order multiple parts and take back unused stuff, also I may be scrambling to find parts while the van is in the air.

Now to my question…
Can any of you guys give me any incite that will help me answer the above questions to increase the odds that I will show up with the correct parts?

So are you using a 318 converter of a 360 converter ? They are not balanced the same

Go to a transmission parts shop and tell them what you have. They will know what you need.

360's are externally balanced. 318 is internally balanced.
the 360 uses a converter with 2 20 gram weights welded on by the drain plug. 318 converters have no weights. the 360 uses a big thick cast crank balancer. the 318 uses a thin balancer. pictures would help. the flex plates are the same. you need to look and see if you have weights on your converter and a thick cast crank balancer. the weights are visible through the inspection plate when the converter drain plug is in the 6:00 position. if you do, that is not the issue.
does it vibrate all the time or just when driving?

There are also flexplates that are balanced to allow the 318 converter with a 360.

360 balanced flexplates are redily available like B&M if you think name brand reboxed is worth the money
balance on the flexplate instead of the converter gives you a much wider selection of converters
and no having to weld weight on yourself
hint how so you balance a converter with weights on it?
how many converter shops have a converter balncer?
check and if not pass 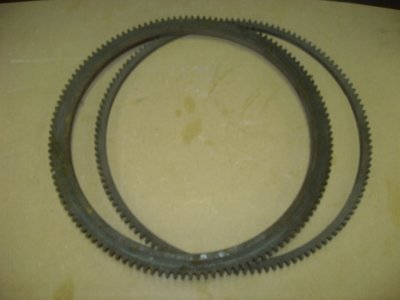