My 727 and/or torque converter apparently has failed on my '69 Charger with 440 engine with TTI Headers/Exhaust .... left a trail of fluid on return trip to house, and is leaking from torque converter access plate. Must have broke pump seal or cracked the housing ? Dang ! It only has 200 miles on a rebuild......

So my question is what is the best way to remove the transmission and torque converter only with the engine still mounted in the car ? Will it clear the TTI headers ?

I have a 2 post lift, so should I get a floor-jack style transmission jack to support the trans during separation & removal from the engine ?

Do I also need to support the rear of the 440 engine with a brace underneath, perhaps attached to the torsion bars ?

Any help/hints or previous article references appreciated... Thanks, Jack.

After I drain the pan, pull the driveshaft and install a rear trans plug, remove the starter and I pull the inspection cover and remove the convertor bolts and push the convertor back into the trans a bit. I slightly jack the rear of the trans to take a load off the cross member and get the cross member out. I put a bottle jack on the cast iron flat edge back of the block near the oil pan corner and remove the rear jack. Then I remove the linkage, dipstick, lines, all but one case to block bolt on each side and put the trans jack under the pan. Then the last two bolts and the trans pretty much falls out as the trans jack is lowered.

I have Pro Parts headers with full exhaust in my Dart and I can pull the trans out without touching the exhaust. I can't speak to your TTIs, must be plenty of others with first hand knowledge.

With TTI headers you will need to rotate the trans to come out the bottom.

HEMI-ITIS said:
With TTI headers you will need to rotate the trans to come out the bottom.
Click to expand...

Yep, Once separated from the engine i had to flip the trans on its side to get it down.

As for engine support, i placed a wooden 4x4" across the engine bay near the fire wall.
Then used a strap to support any weight of the engine, it's only partial weight as it still sits on the engine mounts so doesn't have to be anything heavy duty.
Another thing, before you start unbolting the trans/engine flange and with the cross member removed, lower the transmission tail an inch or 2, then support the engine to hold that angle.
It will be easier and more accesible when you are going to reinstall it.

I used a transmission jack to support the trans, makes it much easier to have a free hand.
Be careful of the converter, it could fall out once the transmission is pulled, i place one of those F-shaped clamps on the lower part of the bell housing which prevented the converter from slipping out.

Oh yeah, don't forget that dip stick...i had to pull it with the trans already loose....not nice.

And have a good look what had failed and what is the root cause, those seals supposed to last a decent time.
Assuming your converter is new, an old converter might have a groove worn in the nose at the seal position.
The 2 locator pins are still in place on the mounting flange? very important for proper centering of the 2.

I have a bar with 2 J hooks that we made years ago to support the engine with a trans out. It hooks to the torsion bars, and the threads allow adjusting the angle of the engine a bit when removing and installing a trans. You should be able to easily fab one with unistrut like used in building construction. (Lowe's probably has everything needed.)

I just set a block of wood on the centerlink under the pan.
It doesn't have to hold much maybe 80-100 lbs if that.
You might just want to remove the passenger header that's the easy one.
Unfortunately you'll need to drain the coolant to do it.

HEMI-ITIS said:
With TTI headers you will need to rotate the trans to come out the bottom.
Click to expand...

Ok, thanks.. so how do you do that ? as there is not much room ..... Does it have to be turned 90 degrees, with tail shaft pointing down, then rotated out ? can I still use a floor trans jack, or should I get one I can use with a car lift ?

Jack Parmentier said:
Do I also need to support the rear of the 440 engine with a brace underneath, perhaps attached to the torsion bars ?
Click to expand...

Even tho the photo shows the engine removed instead of the transmission, you will get the idea.
Run a ratchet strap from T bar to T bar or frame hole to frame hole placing it at the rear of the oil pan close to the crank area.
Harbor Freight lift type transmission jack is budget friendly and works great. I never expected much from it but have been using it for over 20 years now even loaning it out to friends. 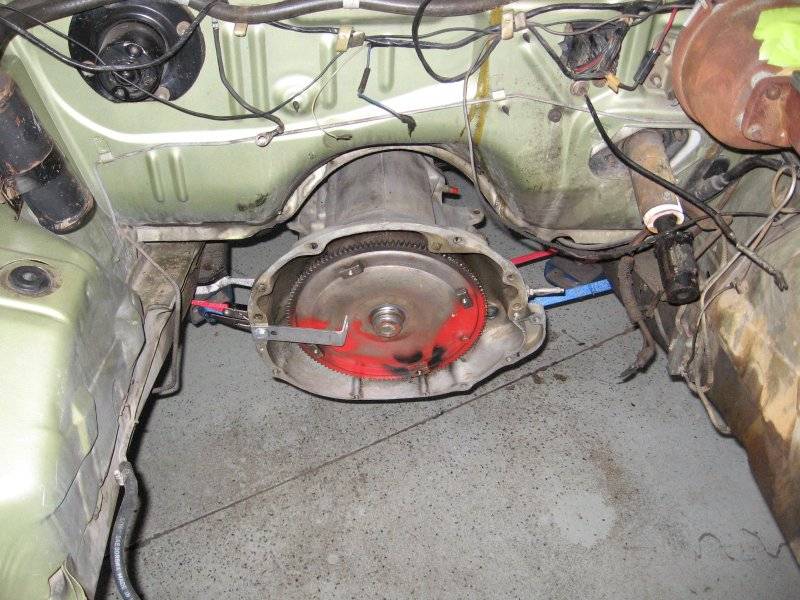 You have a lift, so a transmission jack makes the job pretty easy.
RTJ-3000

A under hoist saftey stand could be used to support the engine under the oil pan.
These HF ones are OK, the design makes them take up more space than the straight pole stands, but only $90
2 Ton Capacity Underhoist Safety Stand

I have used these to support the rear axle off my 4-post lift, and also support exhaust systems when installing them.
If you have a "H" or "X" pipe exhaust, I think you will need to remove the pipes from the headers to the mufflers.

It sounds like the trans might come out without having to loosen the headers from the block?
With my old 2" hooker super comp headers, I need to loosen them to get the trans out. I don't know how much room there is with the TTI headers and 727 trans.
The only big block car I have with TTI headers is the manual 5-speed LGT-700 transmission in the convertible.

Jack Parmentier said:
Ok, thanks.. so how do you do that ? as there is not much room ..... Does it have to be turned 90 degrees, with tail shaft pointing down, then rotated out ? can I still use a floor trans jack, or should I get one I can use with a car lift ?
Click to expand...

You can keep the trans horizontal.It's just a little too wide to drop right out so a little rotation drops the trans through the tight spot. 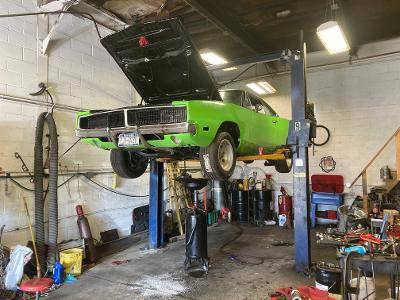 Thanks for the help... I'll let you know what I find out as the failure, after I drop the trans

Drain the pan before dropping the trans out!

HEMI-ITIS said:
Drain the pan before dropping the trans out!
Click to expand...

I disconnect the cooler line at the radiator and start it in neutral and pump it out. Saves a big mess if you don't have a drain plug.

Another tip:
A wine bottle cork fits nicely in the hole for the fill tube.

Jack Parmentier said:
Thanks for the help... I'll let you know what I find out as the failure, after I drop the trans
Click to expand...

If the headers are close, a rachet strap can pull them outward pretty far. Makes some jobs a lot easier. I put a pice of rollbar foam on the drag link and let the motor tilt down
It can only go so far.
Doug

Jack Parmentier said:
Thanks for the help... I'll let you know what I find out as the failure, after I drop the trans
Click to expand...

Well, got the old 727 out... not sure what the failure was. Appears that it might have been the front pump & seal, since it dumped alot of fluid on the ground before I shut it off.

Used a Jegs 79010 transmission jack for my lift, worked fairly well... but I needed to use my engine hoist to move the trans to the lift and back off the lift since it is tall. Was alot of effort to remove and install bolts though with the TTI headers installed.... could barely reach the long one by the starter.

For supporting the back of the engine during removal, I used a square tube bar with U-clamps attached to the torsion bars and upside down carriage bolts at oil pan-engine location. Worked well, engine did not move.

Went with the TCI Super Streetfighter 111005 727 transmission and TCI Breakaway 141200 torque converter.... also swapped out the pan for a TCI 128000 die-cast. It had a Derale deep pan before on old trans (you can see it on photo), but it was too close to the ground & afraid of catching something with it.

Hoping to drive it this weekend to see how it is working, if it's not too cold... 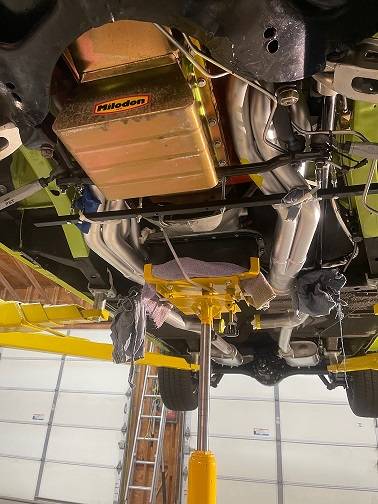 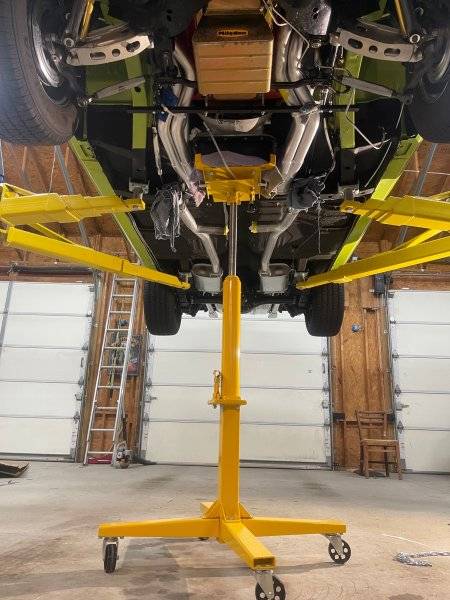