On Oct. 1, marijuana became recreationally legal to purchase at dispensaries throughout the state. So far, only three dispensaries are licensed to sell in the state, but many more are in the licensing process. 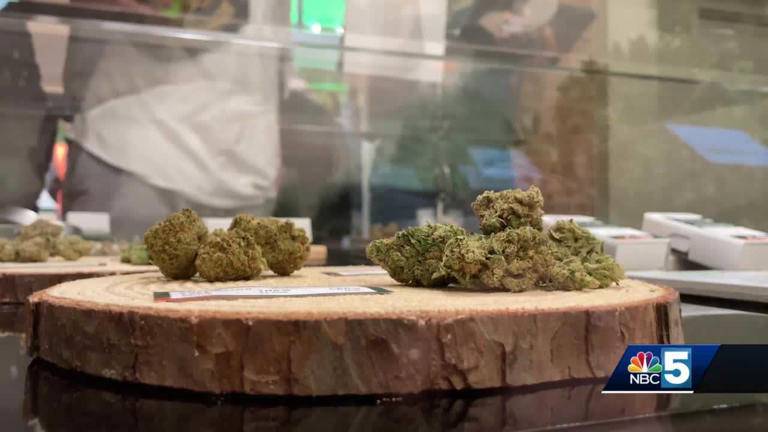 
Saturday morning in Burlington, Cere's Collaborative hosted its grand opening.
"I think people have been in good spirits and are looking forward to this as much as we have. The weather's been beautiful, so were really excited, we’ve got a line and that people are happy to be here," said Russ Todia, the chief operating officer of Ceres Collaborative.
While the dispensary did not open until 10 a.m., many were in line for hours before.


"I was here around 8 a.m., and there were some people waiting, so I don’t know how early folks got here, but certainly a few hours before we had opened our doors," Todia said.


People in the community are excited that they can buy marijuana products knowing they are safe.

"I think it probably encouraged a lot of people just to do away with all the bad stigma about it because, honestly, it helps a lot of people," said Matt Viscido, a Vergennes resident. "I was in the Navy, I have PTSD, and weed helps me a lot more than alcohol did," he said.
Cere's Collaborative's staff looks forward to what is ahead in the industry and is also excited to serve the community.
"We didn’t know exactly what to expect, but we’re certainly happy that things have gone smooth and we’ve been able to get everyone the product they're looking for," Todia said.

When it was legalized in Canada, Ontario decided they would license a "limited" number of dispensaries, control where they were located and they would be sold for $50k a pop. Well I don't know what happened but now there's one on every block.

Initially when they opened there was a supply issue due to the new regulations and there were lineups outside the dispensaries. Covid also had a role to play in that. But the issues have been sorted out and now things could be considered normal.

And you have to give the Natives credit, the day it was legalized there was a well-stocked dispensary next to every smoke hut on the rez's. But the quality and safety of the weed was probably questionable.

What did legalizing it do? Well for one thing the price of weed dropped by 60%. Has it created any "issues" such as increased use or number of users. etc. It doesn't appear so. You don't see people openly smoking it in public - you'd know it, you'd think someone had been sprayed by a skunk!

I saw a feature on the news recently about the situation here in Ontario now. It seems that there were a whole lot of retailers that opened up, and there was not enough product to go around at first, while legal weed was still a novelty. Now that this novelty has worn off, it appears that there is not as large a sustained market for the stuff as originally expected. Not all of these smoke shops are turning a profit now. The Fed's and the Province are collecting a combined tax of about 40 % on the sale of weed. That is the reason they legalized it. People are still able and willing to buy their marijuana on the black market, without the taxes. The next phase seems to be that quite a few of the legal smoke shops will be closing up because they cannot turn a profit, since the supply now exceeds the market. In my area of Southern Ontario, where tobacco was extensively grown before smoking was proven to be unhealthy and fell out of fashion, the tobacco drying kilns have been replaced by marijuana growing greenhouses. The report went on to say that there are more smoke shops in Toronto than there are Tim Horton's coffee shops, which number about 425. But I think that can be said of any community. The supply and demand equation will level out, and it will reveal that not everyone found the pot of gold at the end of the marijuana rainbow.

Everyone that was supposed to make money during legalization up here has and it has taken a drastic dive since. When Canopy Growth sells off it's store front side of the business you know there's no money in retail...

Dave6T4 said:
The Fed's and the Province are collecting a combined tax of about 40 % on the sale of weed.
Click to expand...

Initially the tax was a "fixed" $1 of the "per ounce" sale price of $10 - or 10% for those who need help with math. HOWEVER, when the price dropped to $4 an ounce, the tax was already fixed so it couldn't follow suit. And of course there's whining about that. But nobody would have whined if the price had doubled and the tax remained the same! Its like anything else in life, ya gotta take the good with the bad and vice versa.

They legalized pot in Illinois a couple years ago and dispensaries opened all over the place.
The state was boasting a year later about how much money they were raking in from the taxes.
I have mixed feelings on it. I’m a libertarian so I think people should be able to make their own decisions.
But I also have friends who smoke weed and it’s pretty apparent to me that years of toking dumbs the mind.
The millennials next door smoke weed and sometimes smoke it outside, and I‘ll smell weed coming in my windows.
My engineering job is for a company that does some federal contracts and their employees can’t use drugs due to federal laws.
And I’m a pilot as a sideline job and no drugs allowed for that either. I’m probably being paranoid but when I smell weed smoke coming in my windows from next door, I close the windows as I don’t want to take any risk of failing a drug test from second hand smoke!
There‘s been talk in the pilot community that some restaurants spice up food with CBD that they don’t disclose on the menus. Some pilots have supposedly failed drug tests due to that.

XS22J8R said:
But I also have friends who smoke weed and it’s pretty apparent to me that years of toking dumbs the mind.
Click to expand...

Every pothead I know from my youth is dead - most, likely from cancer. But alcohol abuse can kill just as easily.

As for your CBD concerns, legal CBD is for medicinal purposes - not for getting high. CBD is produced from hemp - which contains much less of the THC which gives a high. "Weed" is Marihuana - which contains the THC that gives the high.

This raises the question of why any restaurant would put CBD in food - especially without stating it on the menu.

gkent said:
why any restaurant would put CBD in food
Click to expand...

XS22J8R said:
talk in the pilot community that some restaurants spice up food with CBD
Click to expand...

That's one expensive spice to add. If the menu item price doesn't reflect that expensive addition then its a myth.

I haven't been in a legal pot shop since they opened up years ago, with their high prices and poor selection. Recently I checked them out again and couldn't believe how the retail prices have dropped and the selection of products that can be purchased legally. I was really surprized to see hash for sale and cheaper than I've ever seen it in the blackmarket. Actually the prices are very competitive with the blackmarket even with the taxes included.

Every now and then you can smell weed in public areas but not that common. Smoking weed is not that common or liked amongst the younger generation as they live to vape the weed. You can smoke a vape pen containing high THC oil in an enclosed area and no one would know. No smell at all.

Do they do Mail-order? Asking for a friend.

kiwigtx said:
Do they do Mail-order? Asking for a friend.
Click to expand...

kiwigtx said:
Do they do Mail-order? Asking for a friend.

I’m sure we’ve all heard the joke, but it’s too funny.

They should take take the taxes from the marijuana, and use it to fix the roads, and call it “Operation Pothole”

gkent said:
Every pothead I know from my youth is dead - most, likely from cancer. But alcohol abuse can kill just as easily.

As for your CBD concerns, legal CBD is for medicinal purposes - not for getting high. CBD is produced from hemp - which contains much less of the THC which gives a high. "Weed" is Marihuana - which contains the THC that gives the high.

This raises the question of why any restaurant would put CBD in food - especially without stating it on the menu.
Click to expand...

You don‘t know US federal government bureaucracy do you?
A commercial pilot, ATC controller etc takes their required pee test for drugs, tests positive for cannaboids including CBD, they are screwed.
Doesn‘t matter if CBD is legal for some medical purposes. Actually it doesn’t matter if a number of legal prescription drugs, even many otc drugs are legal, the FAA prohibits their use by a pilot.
The FAA is pretty strict and ruthless. We strive to keep out of their sights for fear of getting shot down!
If you are interested in learning more, the FAA.gov website and AOPA.org websites have lots of information on what drugs are allowed and what are prohibited for pilots.
I don’t know much about the CBD in food issue other than I was at a pilot seminar a few years ago and at a presentation by an FAA aviation medical examiner during Q&A a commercial pilot asked about it and the AME said that can be a real problem, and not knowing it was added to food you were served is not an excuse the FAA accepts if a pilot fails a drug test.
I haven’t read or heard much on the subject since, but that seminar gave me another thing to worry about as I’ve already found myself under the heels of overzealous FAA inspectors a couple times over the last 34 years since I first started flying and have no desire to deal with that abuse again.
The FAAs motto is “we are not happy until you are not happy”.

I once went to a FAA pilot safety seminar where they served samowiches with poppy seed buns. No kidding.
You must log in or register to reply here.

Here is how we deal with and what we go through in the aftermath of a Major Hurricane in Florida. Day-1

Facebook To Temporarily Allow Calls For Violence Against People ......

Can you imagine seeing this in person?