A few months ago, one of these went up on each side of an intersection where a private school is located. 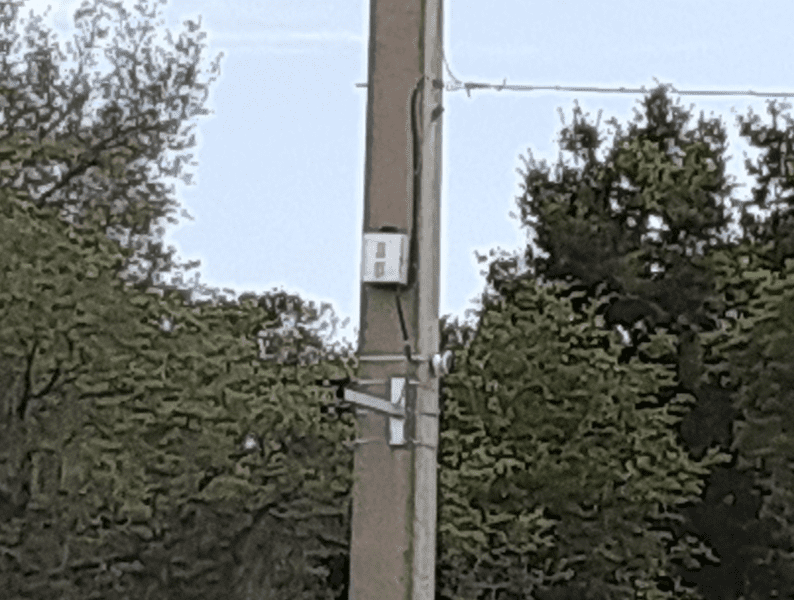 Previously the light would turn red for the 4 lane almost immediately if a car was on the pad, leaving the school.

Now, the light turns red for the 4 lane extremely frequently, but doesn't behave as it did before for the outgoing traffic.

I can see the light about 2 miles away, and in the mornings about 5:30 am, it can cycle red three times before I get to it, even if there is no traffic !?

This pic is digitally zoomed and was taken at a crawl speed as I passed after stopping at the intersection on my way home. I will try to get a better pic. What you can't quite make out, is two black hooded sensors at the end of the arm which glow red at night. The arm and sensors are oriented towards the traffic along the 4 lane road.

I've googled "speed cameras" and what comes up looks nothing like this.
They look much more similar to red light cameras.

You can see it has a "standard" traffic camera, but it doesn't look photo enabled to me.

Anyone see one of these before?

Looks something like the NYC bang detectors.
(Gun shoot)
It could still be a new radar simply designed to detect on coming traffic. I’ve seen these set up around populated areas on streets that routinely seeing speeding cars. The only time the “The Law” is paying attention to the roads traveling speeds is during school hours when the kids come and go & extra activities like a sporting game, extra hours for study help.

Where I was, the radars were timed to go on and off shutting down on weekends and holidays.

Can the red light on that device be seen from direction opposite the signal? Do they stay red or are they red when the signal is red. In some cities, they have a red or a red and green light shat shows on a pole what color the light is so law enforcement can see that light and watch cars to see if they run the light.

They are small- I estimate 2-3 inch square or smaller, constantly lit and you have to be almost directly in line with them to see them.

I'm trying to figure out if they are aimed at oncoming traffic or traffic moving away from them.
So far that is unclear, but they are definitely aimed specifically.
It's also interesting that they are extended on that arm.
I might not have noticed them at first if they were tighter to the pole.

I might add that there is zero foot traffic here despite being a school entrance. Zero.

There is also zero bicycle traffic, despite the county spending what must have been hundreds of thousands if not millions of dollars last year to widen the road, narrow the medians, and in stall a second 36" wide bicycle lane inboard of the traffic lanes, to complement the existing 36" bicycle lane that gets ZERO use. I have never seen a bicyclist on this stretch of road. Ever.

Meanwhile, the 2 lane, 50 MPH perpendicular road at an intersection 3 miles away sees heavy bicycle and pedestrian traffic despite it's extremely narrow "bike lane" about 18" from the white line to the extremely steep shoulder. Why they didn't spend that money to put in a usable bike/pedestrian lane on that road instead is inconceivable.

I have a little experience with traffic systems: Stuff sometimes gets installed because of community insistence. I would not bother yourself with "why is it there" compared to other seemingly needful areas. Detection systems have adjustability and it may be set to be too sensitive. Call the jurisdiction in charge of the system and tell them your observations. Be insistent that it be looked at and ask for a call back. Call them if they don't call you. The squeaky wheel really does get the grease.

In Lakeland, my Passport detector goes nuts for red light cameras more than any City I’ve driven in.

Reminds me of Allentown, Cops are hiding there too. Can’t blame them.
R

About the bike lanes where not needed, and none built where they are need.

Have you noticed the trend yet, they build things in the wrong place all the time. Someone is getting paid off, it doesn’t matter what the public needs, it’s their special interest projects first. Take note of the last 16 months for instance.

I'm in Ocala Florida. I haven't noticed any here. but, I really haven't been looking.
What I have noticed Is, that if I stop about 75 feet before the line at the traffic light and creep up 10' and stop. A few times. I can get the light to turn green really fast.

#41 said:
I have a little experience with traffic systems: Stuff sometimes gets installed because of community insistence. I would not bother yourself with "why is it there" ...
Click to expand...

My inquisitiveness just won't let me do that.

I'm more interested in what it is. Why it's there is a secondary concern, pending the answer to "what it is".

It's not like any other traffic monitoring device I've ever seen.

Not to get too far off the OP topic...

For some reason FL doesn't seem to believe in non-urban area sidewalks.

It's only 1/2 a mile to the Dollar General near my house.

It does not look like a camera or inductive loop system to me, so maybe infrared or thermal? I have not dealt with those systems before, and now I'm outta the game.

At any rate, all of these systems have adjustable sensitivity that feed data to to timer/program/controls. If this was just added, it is probably set up to communicate via cable or directional signal to the control system that is already established at the intersection light. These systems need to be dialed in and the techs don't always get it perfect. Different weather, light, temperatures, etc. can impact the set ups and they may need to come back and adjust. They may or may not know that it is functioning properly, so get on the horn.... as a bonus you can satisfy yourself by asking them what kind of system it is.

Instead of big tech worrying about completely autonomous vehicles, maybe they should first figure out how to keep traffic lights from doing back and forth for nothing.

Charged440 said:
Instead of big tech worrying about completely autonomous vehicles, maybe they should first figure out how to keep traffic lights from doing back and forth for nothing.
Click to expand...

Tell that to California's Solano, Yolo, Sacto, Stanislaus, Contra Costa, San Joaquin, and God knows how many other counties? Unless it's 3am, you can't make a green light to save your life! You can't even go to the next intersection without stopping for a fucking red light! No wonder they have to have CARB to try and keep their air clean because you waste more time waiting for the light to turn green than you do driving!

In the morning, you're more likely to get red lights trying to get out of the city as the light timing favors the heavy inbound traffic.

For the evening rush, they often reverse the timing so it's harder to get in, and easier to get out.

Florida seems to post signs for their cameras. Could it be for Emergency Vehicles control?
Last edited: Apr 19, 2022

rumblefish360 said:
Looks something like the NYC bang detectors.
(Gun shoot)
It could still be a new radar simply designed to detect on coming traffic. I’ve seen these set up around populated areas on streets that routinely seeing speeding cars. The only time the “The Law” is paying attention to the roads traveling speeds is during school hours when the kids come and go & extra activities like a sporting game, extra hours for study help.

Where I was, the radars were timed to go on and off shutting down on weekends and holidays.
Click to expand...

They are not gun shot direction locators. I worked on the testing and validation end of the "Boomerang" project at Lawrence Livermore Lab, that developed that technology.
You must log in or register to reply here.

What happens when you get out of a routine.

This is certainly an interesting weather forecast for Friday.
2