Why Poly Engine Mounts are Garbage

Poly engine mounts are garbage, and you may never even notice.
I see this come up at times, so here's what I've learned.

My car has a tunnel ram, so years ago when I made the switch to poly, I noticed, over time, the engine was making contact with the hood on the passenger side.

Schumacher replaced both mounts twice, as the driver's side mount also looked melted from engine heat to them.
No way is this a dig on Schumacher, they were very helpful.

First time, they wanted me to create a heat shield for the driver's side, which I did. No change, 'melted' away.

Second time they would only replace if I had their headers, I do.

Here's the rub on the heat theory, it's an a-body big block car, with the driver's side mount at the front, essentially forward of the header, nowhere near heat, had a heat shield anyway, and there's a giant hole in the hood.
Mounts are not melting.

So, after cutting a 'melted' mount apart, I realized the design flaw, and more importantly what the engine is actually doing.

The poly mounts are designed to resist being pulled apart, top of biscuit to bottom.
However the forces being applied, imo, are twisting the engine, and the 2 steel sides within the mount just slide back and forth past each other within the poly without making any contact whatsoever.

I noticed it was just as obvious on the passenger mount, and also contributing to the tunnel ram lean. There's no way to tie the engine down on this side.

Next, I drilled straight through the mounts and ran a bolt through. Unfortunately on the passenger side there's no room on the underside for a lock nut, or even for the bolt to stick out.

Even with the hacked off bolt on one side, and a full bolt on the other, or not, both mounts give up from being torn up inside.

A friend didn't believe me, said his mounts were fine. Sure, your engine isn't through the hood, so you can't tell just by looking at it, but closer inspection showed his mounts looked like mine in the pics.

Passenger side mount, poly shows the evidence of being slid up on the outside, and slid down on the inside to where it is contacting the block. It's being stretched apart from the inside.

When new, mount was not contacting block, poly was tight against the steel, hole in hood is plenty big, and engine was not against it. 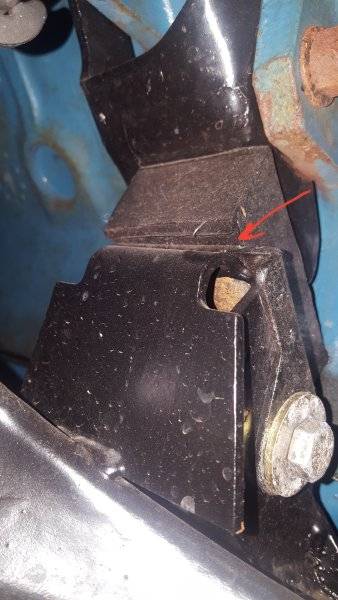 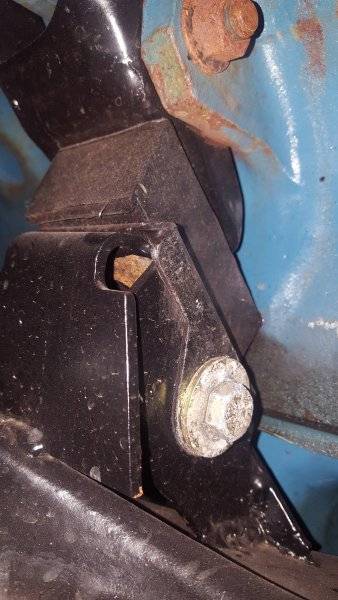 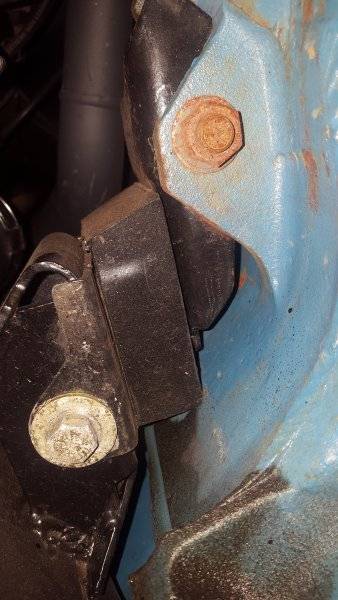 Thx for the info. Looks like anything would have a hard time maintaining any strength over time at that angle.

I had the EXACT same problem, but was twice as bad before I caught it. Same story, heat shield needed, etc. I ultimately ditched them after the second set failed and went with MityMounts, but I ripped the bolts out of that set. I have the replacements on the bench waiting for the engine to go back in.

This is interesting. I made my own urethane engine mounts that lock similarly. and poured in the urethane. I work for a urethane foam company and make molds out of silicone urethane and fiberglass. So I wasn't going to spend any cash buying a set. I haven't driven the car yet so I don't know how my home made mounts will hold up. But I will keep an eye on them and keep my fingers crossed.

I had a Schumachar passenger side mount fail, didn't even think that was possible at the time. Mike gave me another one and then I sold the car so don't know if that one went bad as well. After that, I switched over to solid mounts on all my cars and never looked back.
G

I run the solid mounts even on my street cars.

I have had the same problem. Switched out 2 sets. I am tired of changing motor mounts. I will try mighty mounts when they fail again.

Not a problem with spool mounts

I always solid mount the drivers side, sometimes the passenger side as well if the engine has any power. 512 in my roadrunner is solid mounted, 99% street car. No I’ll effects.
You must log in or register to reply here.

M
How to replace the transmission mount?
2