6 Years into the life of a permanently injured first responder.

This is a cut and paste from the Facebook post of the wife of a local Fire Fighter that suffered permanent brain damage during a rescue attempt. It's kind of long, but I felt it was worth posting. This hits home, as there has been fund raisers and much prayer for him in our area While I don't know him personally, I am friends with some of his cousins. I just was moved by the posting and how things really affect people long after they are out of the news and public view...
> "
6years, it’s been 6years.
6 years ago started out like every other. Bubba got up, got ready for work and I fixed his lunch, And out the door he went. It had been raining for quite a few days. We were building the front deck, Bubba had most of it done ,he just had to put the metal roof and railings on but at least we were able to sit outside and enjoy it. We love that deck.
Fast forward to quitting time, Bubba called me on his way home to say the swift water team had been called out for a rescue of a family stuck by flood waters.You see Bubba Is a firefighter, he is also on the swift water rescue team and on search and rescue. I didn’t get to see him before they left but I did get to talk to him on the phone. I told him to please be careful and that I loved him.
Our lives changed forever that night. You see while they were heading across to do the rescue Bubba apparently slipped on something or something under the water knocked him off his feet. Bubba went under water and then into cardiac arrest. Bubba had to be pulled from   the raging water to safety. Chris is my hero for not giving up on getting Bubba to dry land unfortunately the damage had already been done

Rescue workers had to preform CPR to bring him back. They rushed him to the hospital.
While all of this was going on, the girls and I were just sitting at home watching tv and waiting for Bubba to come home. The boys started barking so we thought Bubba was home. It wasn’t him, it was Jerry Dean. I remember asking him, what did Bubba forget that he wants you to get. The look in his eyes, he said Dawn there’s been an accident, my first thoughts was not again, this can’t be happening again. He said they got a pulse but we need to get you to the hospital,that’s when Irvin Ray, showed up and I knew it was bad, he’s the Fire chaplain.
Jerry Dean took the girls to their nana’s and Ray took me to the hospital. That was the longest ride of my life, not knowing what to expect. When we got to the hospital we had to wait what seemed like an eternity to see Bubba. Seeing your loved one like that is devastating , he was hooked up to a ventilator and non responsive. My heart broke into a million pieces that night. It still breaks everyday.

Bubba was transferred to RMH where it seemed like another eternity before we saw him, he was in ICU hooked up to so many machines, it was devastating and scary to see. The doctors that night, early morning, came in with the news that Bubba with probably never wake up, I told them they didn’t know him and he was a fighter. He did open his eyes but he was not awake, awake. We were in the hospital for a month then transferred to rehab.
The hardest part about rehab was leaving him and going home, I had been by his side the whole month in the hospital. I was at rehab every single day and when I went back to work I was there twice a day, I’d go in between my bus runs. It was the hardest 7 months, and then we brought him home and no looking back. That first yr and half was ruff, he had multiple hospital stays.
Now to the hard stuff. It’s been 6 yrs of not hearing him tell me he loves me, 6 yrs of no hugs, no passionate kisses, no love making, no jokes, no fights( I would give anything to have argument with him). It’s been 6 yrs of not getting to ride the bike with him, I miss that so much, that was our time. I miss his voice so much, his passion, he wasn’t afraid to kiss me in a store with people looking on, it can really make a girl feel special

. I miss his not so’s, he’d tell me he had just left somewhere, so I’m thinking ok he’ll be home in 20-30 min only for him to pull in 5 min later, he thought it was funny, it wasn’t a complete lie

.
Today Bubba is still completely disabled, he relies on me for everything, we still see improvements everyday and I wouldn't trade Bubba being home for nothing in this world. Is it hard, you bet it is but I love this man who took a chance on me when I wasn’t looking for love. Our vows say sickness and health, richer or poorer, I take that seriously and I know he would do that for me.
Every yr I say to Bubba that this is your yr. This year I'm more determined than ever, we got our ceiling lift put in which means I'll be able to get Bubba up by myself. We are going to be working more on his Quadriciser Robotic Therapy System, and getting in the oxygen chamber, something we will both benefit from.

What happened to our family should not have happened. People not heeding evacuation notices and then having to call for help putting other people’s lives in danger. This is what happened here, they stayed to ride it out and then had to have help. They also had a child with them and this really pisses me off. This accident should never have happened. When I see reports of those putting themselves in danger, driving through high water, floating in high ruff waters after a storm, I HAVE NO SYMPATHY FOR THEM. These people should have to pay restitutions for all emergency personnel who came out and then they should be fined, and if children are involved they should face child endangerment charges. Our lives are forever changed, never to get it fully back.
We will never give up hope because we see small improvements everyday, think twice before you do something stupid,it’s not only your life your messing with.
Please continue to pray for our family, we're not done yet
#wrightsfight #faithoverfear
We love you Alan, aka Bubba
I also want to say thank you to everyone who has helped us along the way, we greatly appreciate it.

Sad story but her love this man is overwhelming. It's a coin toss because he was doing something he loved and fell victim to it. I have to agree with her if you are told to get out then get out. I also that they should pay because they brought the danger to him and others. Just because they wear a badge doesn't make them superman they are people also.

Yes - You’re right this one is a heart wrencher. Thank the Lord for both of them to have found each other all those years ago - and the continued recognition of their vows made before God that day of marriage. Life throws some incredible fastballs at is sometimes - and often we just suffer and never k ow why. But a world renowned Pastor of a church here in my area once advise us in his message that all the difficulties and challenges of life here on earth are not what it’s all about - Rather this life is simply preparation for our eternal life in Heaven with our Lord - where all these challenges and often miseries will simply cease to exist and eternity will be blissful In Heaven. We simply need to accept and have faith and our free gift awaits as promised. This family’s reward exists and will be what they deserve for their simple act of faith. God Bless them and the road ahead.
F

Terrible news ...... I am the Swiftwater Team Leader for our local Search and Rescue team . Moving water is one of the most dangerous scenarios for all first res-ponders , it is an equal opportunity killer for Law enforcement , EMS , Fire-rescue and SAR units . The hackles on the back of my neck always stand up when a page goes out for a water rescue . If you know of any first res-ponders , always give them thanks for what they do in any circumstances . This photo was of a rescue in the Green River hear in Sublette Co . Air temp was minus 11 and water temp was 34 , got 2 frost bit fingers but everyone else went home safe . 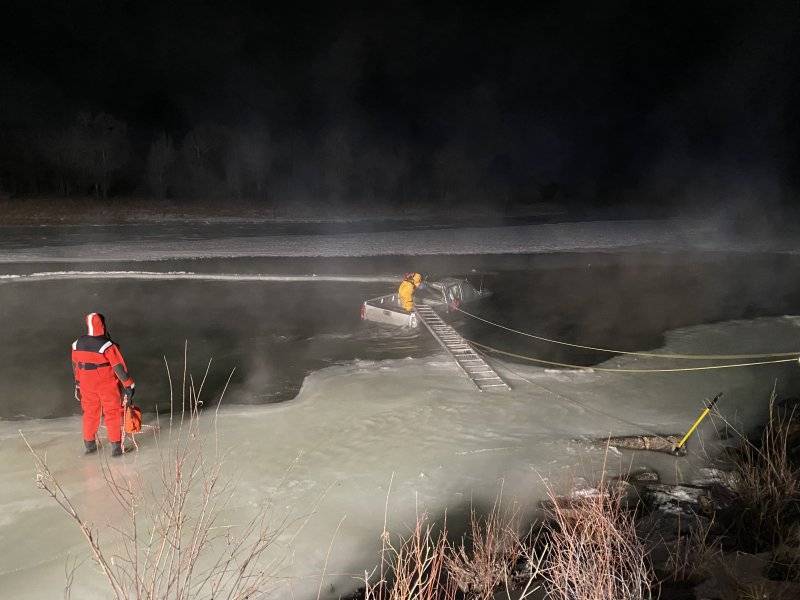 fewillys said:
Terrible news ...... I am the Swiftwater Team Leader for our local Search and Rescue team . Moving water is one of the most dangerous scenarios for all first res-ponders , it is an equal opportunity killer for Law enforcement , EMS , Fire-rescue and SAR units . The hackles on the back of my neck always stand up when a page goes out for a water rescue . If you know of any first res-ponders , always give them thanks for what they do in any circumstances . This photo was of a rescue in the Green River hear in Sublette Co . Air temp was minus 11 and water temp was 34 , got 2 frost bit fingers but everyone else went home safe . View attachment 1303721
Click to expand...

Thank you for your service.
You must log in or register to reply here.