Big block, Automatic OVERdrive and a way to do it cheaper...

So, I have wanted to install some type of overdrive in my Charger for many years. I have considered many options and actually had a first generation used Gear Vendors unit in the car for a little while. The GV worked but sometimes the OD wouldn't disengage at a stoplight and I was starting off in 1st gear/OD, 2nd gear/OD, etc. The GV also delivered a resonant vibration that may or may not have been due to the driveshaft design I had. The GV had a fixed yoke which I later learned could have been removed to allow the use of a traditional GM TH400 type slip yoke. A new Gear Vendors unit would be somewhere in the $3000 range. Not bad but this unit only delivers a .78 overdrive ratio. They have been stuck on this ratio all along since they were first released. Other products evolve and improve but they seem to be stuck on that number.
I have considered a Silver Sport Overdrive. Theirs are based on the GM 700R4/4L60E unit. 3.06 first gear and a .70 4th/OD. The level of durability I'd need would necessitate at least their mid-grade unit which runs about $6000. This is supposed to be a bolt in deal with no cutting but a small amount of clearancing is required. No big deal but the price, right?
Another option is Mopar based, the 518/618 models. The electronic versions are called the 42RH, right? These were all built with the LA/Magnum bell housing pattern and were only used in trucks and vans. The preferred way to go is to get an early version with a 2 wire plug so the lockup converter and OD are easily wired to a toggle switch.
Well...
Today I got a call from a buddy. He was clearing out his garage and had a rebuilt 42RH that he had in his 70 Barracuda. He switched to a 5 speed manual. This trans? New converter, new clutches and bolt in sprag. Two things to consider: One is that it is the electronic version that needs a stand alone computer/controller to operate the converter lockup and overdrive. Second is that I will need a JW Ultrabell to make this transmission bolt up to a RB block.
The trans was FREE. I am hoping that the rest of the parts to make this work may be less than $1000. THis means the JW bell, electronics, drive shaft service and misc other bits.
I understand that fitment will be an issue. I'll surely have to cut and patch the floor a bit, maybe reconfigure the torsion bar crossmember for clearance.
I am asking for suggestions and feedback from anyone that has done this. I have a 2 post lift and a transmission jack so that will simplify the repeated in and out for clearance work.

This allows one to retain the existing bell housing. Pretty spendy though!

My understanding is that a 42re is electric, a 42rh is hydraulic. 42 light duty the 46 is heavy duty. I have a 46rh in my Dakota behind a 5.2 magnum. It has the OD off button which I believe opens the control from the computer. I think you can actually hook up a toggle switch to enable overdrive.

Thanks.
I know that every option has the possibility of having a problem to deal with. I forgot about the floor shifter linkage. The Gear Vendors unit required me to make a bolt on adapter to mount the cross shaft. It sat out of plumb and made the shift detents feel a bit bound up. I would probably have to switch to a cable setup in this case since the tail housing is thicker with these overdrives.
If nothing else, I could sell off some stuff around here to fund that Silver Sport transmission...

I'd go with the JW bellhousing and an A500

I must have had the numbers mixed up. The guts of this trans are from a Cummins Diesel overdrive. He wasn't real happy with the setup and switched to a 5 or 6 speed manual. He had a 440 in the car at first. He used the JW bolt on bell and didn't seem to like it. He later switched to a 392 late model Hemi and took the guts out of the trans and put them back in a traditional small block case. He sold the BB bellhousing awhile back.
I may not go through with this. The controller could be close to $1000, the bellhousing is another $500 with taxes and shipping, floor & chassis mods, drive shaft work, etc. I'd feel better doing all of this if I was building a project car from scratch with rusty floors that needed patches, etc.

Is sounds like you really don’t have enough information to make any decisions yet.


You need to know what exact transmission that you are getting, what was previously done to it with what parts, and what exactly is or was 'wrong' with it. Then you can decide if you want to go thru with the conversion with this particular transmission.


I have been researching this conversion for a year now, and hope do this sometime next year. If it indeed is a 42rh with 3 pin socket (lockup converter), I would take it for free in a heartbeat.


Here are some links I have found to others who have done this conversion.

I have the A518 tranny in my dart right now behind my 318 and I like it alot. Its an 46rh, non lock up tranny, the only elctronic part is the OD button. The previous owner installed and all he did was cut out the top of the tranny hump at the crossmember and fabbed up a mount. 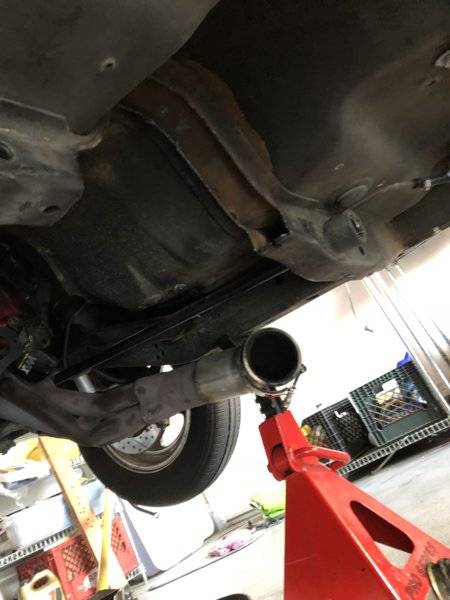 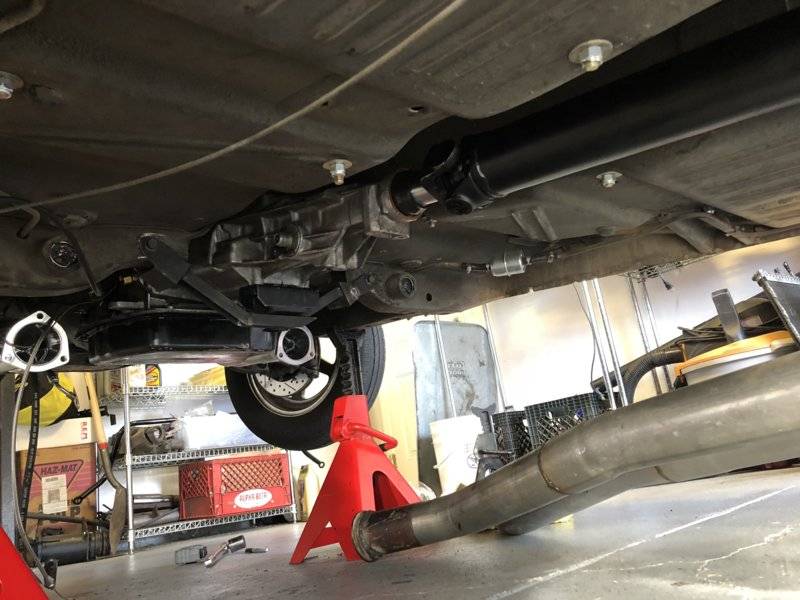 The tf od units use either a-motor, truck v10 or Cummins patterns on the bell housings. None being compatible with a big block. You have to cut the bell off and use the Ultra Bell. The RH units are hydraulic and can be controlled with 2 switches for the od and lu. The RE units are electronic requiring a controller. The units are quite portly at the rear of the main case where the ext/od housing bolts up and its generally right where the t-bar/trans frame is causing interference. The v10 and Cummins units are the most hd of them all. Like the Hemi 727's and then some. The unit you latched onto is a 904 based unit. Can be improved to hold up against a b motor, like what they do for the SS/AH cars but its expensive. With any of those using the lu converter, getting one to hold up for your use would require a custom unit probably along the line of what the diesel boys are using for the trucks and they are not interchangeable with non lu units. There is a unit that was produced on the 91-3 diesel that is od but no lu feature making converter choices easier.
W

The transmissions share components in the od sections so you can add plates there to increase load capacity if you want. The OD units are the same size and length, unless its a 4x. You can do the same shift kits as 727's, shift governors etc on the RH units. I ended up going with a 66- 727 built by Pro Trans in Lancaster using a shorter output shaft for my GV unit. On mine, the GV is just behind the crossmember. I don't like having the unit hanging way out on the end of the standard car length shaft. Even this required some floor reshaping plus further complicated by my using of a 70 k-frame which moves stuff back. No matter which way you go, mods will need to be done. You have to pick your poison. One nice thing about the 4L60 unit is that it has a lower ratio 1st gear which helps get the car moving. One thing I'll mention. When I was at the SEMA show, I talked with an Aussie gent who was working at the Advance Adaptors booth. His company makes stand alone trans controllers for the electronic units. They cover quite a few, GM of course, Fords, ours, imports[since they are down under]. His unit covers the NAG1 like what you have in your late model Mope. The NAG, as I believe, is the Benz/ZF unit being used by the gen3 Hemi crowd behind boosted gen3's and working quite well after they have been modded to AMG specs. Since that trans has a bolt on bell that enables it to be used by various manufactures, I wonder if someone might do a bell for the big block. That trans is portly too if I remember correctly. They do have a controller in the works for the later 8 speed unit but its not ready yet. I was asking him about Allison conversions for the Cummins, like me, which they do, then I asked him about the newer Aisin unit which is an option for the last few years. He said yes on that one too as its quite popular for them to use them in swaps plus they are the oe unit for much of their diesel stuff. The controller has Bluetooth capability that will cover 100 meters with buildings, cars etc in the way. You can do a base setting then continue the mapping on the fly. If you have an issue or don't want to fiddle with it, they can access it by the app in your phone that they set you up with. He was telling me that they can be in and out of the Aisin trans in less time than it takes the factory engineers to even hook up to it. The Cummins people were quite interested in it.

And he's having a Black Friday sale with 10% off.
D

That ZF 8 speed is an interesting proposition. Our 15 Challenger R/T has the A8 and I really like it.

When I find the gents card in the catalog stash, will give you the info.

How much fab skills do you have? I built my own 4L60E "kit" for my 71 big block. It's basically the same set up as Silver Sports. I have around $2000 total in the conversion. The only fabrication work involved is making a new crossover mount. I cut mine out of sheet and welded it together. The trans module requires a tach signal and throttle position signal. If your running a carb, US shift has a throttle position sensor that mounts right on the carb. Best part about running a 4L60E is NO CUTTING!!!! I could VERY easily revert back if I wanted.
You must log in or register to reply here.

New converter on the way !