Dang red paint. Dont like it but what can I do to make it not fade so fast

I'm not a fan but like white even less. Back in late 2000 I found a 97 2500 Dodge diesel and well, the red was already dead and starting to lift but man, it sure ran good. It was the best running used diesel pickup I had driven and had driven many and still have it today.

Going on 3 years ago I found a 96 Dakota that was pretty dang nice with only 139k miles and bought it....and yep, it's red too. It's been repainted but don't know when. All I can say is that it's trying to fade out after doing some easy buffing on the hood. My first red vehicle was a 67 Dart back in 74 or so and the red was totally faded on it and buffed it out but less than a year later, it looked almost as bad as it did before buffing.

I understand why red fades so fast but is there anything that can be done to make it not fade so fast? Have no idea whats on the Dakota but can take some 2000 to it and see if it comes up like clear coat. The diesel.....well, new paint is the only remedy for it.....at least on top.

Btw, this stuff is garage kept!

I don't know the secret but I understand what you are saying. One of my Charger's is red and it stains/oxidizes so easily. If it gets rained on it water spots so bad and they do not come off without being rubbed out, polished and waxed each time. However, the paint is getting wore out. For being over 40 years + paint it still looks decent.

Perhaps Dodge used low grade paint? I don't know, but I've heard that a good UV resistant wax should help. Red absorbs a lot of blue, green and UV light due to it's very nature and those parts of the spectrum can cause pigment fade. Then again, there are two different reasons why red can turn to pink - either the actual colour has faded away, or it has oxidized and there's a chalky coating on top. The later can be polished off, the former is more problematic. You can cut polish pink paint to actually remove it to get to the darker layers beneath, which means that you're making the paint layer thinner.

As a comparison, I just took this picture of my car after reading your post; it's a 1995 and you're looking at the original factory paint. There are some problems - it's old and some parts of the clear coating are starting to bubble. But it hasn't faded, and it is always parked outside because I don't have any choice. And although I waxed it a lot when I first got it (back in 2006) I've been negligent for the past few years. 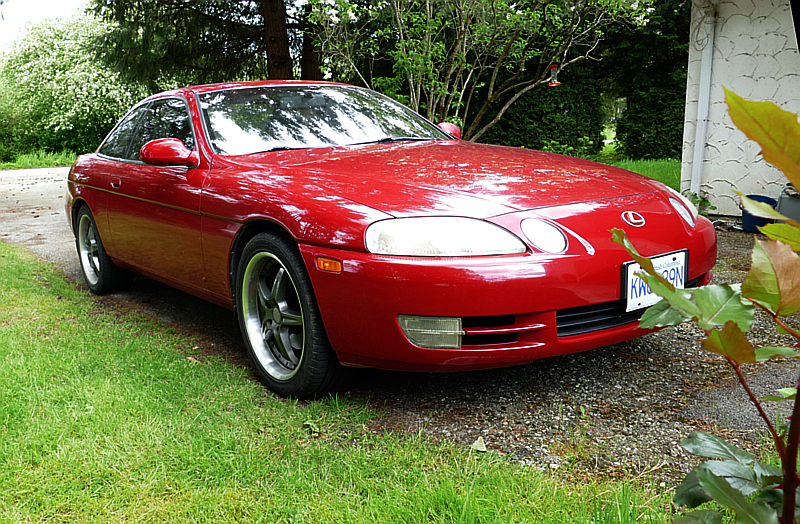 Some years ago, I did one of my Dodges in single-stage chroma-one non-metallic red. Spectacular results, looked as good as new when I sold it a few years later.

The UV is breaking down the paint bottom line. Among other things this is one of the differences between a cheap paint and expensive paint. You can try a good quality wax that should offer some UV resistance. There are some pretty wild ceramic coating out there now, depends how far down the rabbit hole you want to go .

Try "Nu-Finish". I used to have a red-orange T-Bird.....well I thought it was red-orange....polished it with some of that stuff and discovered the car was really red! An application a couple three times a year kept it looking nice. I'm sure there's others that work good for folks but that's been my go-to ever since I had that Thunderturd.

I had my '64 Polara done in single stage Centari red enamel and then had it sprayed with clear coat. It stayed good and bright until I had the body redone recently.

I'm just a guy with a screwdriver.

I kept my red 97 Dakota nice and shinny for years by cleaning and waxing it twice a year. Even here in the high desert.
You must log in or register to reply here.

paint codes and what you really get.
2

What's this thing and what does it do?

Due To Gas Prices, Next 'Fast & Furious' Movie Will Be About Bicycles.