While cruising Sunday night, noticed grey smoke coming from my '70 Satellite. Pulled over, checked oil, and it was down a quart and a half. It was full the day before. I topped it up, and got it home. There was a puddle under the engine in the garage that must have happened when we left. Last night I jacked up the car and checked rear main seal first, but the inside of the bell housing and torque converter were dry and clean. There was a lot of oil at the front of the motor. It appears to have been slung all over. From the inside fenders, lower rad hose, oil filter, bottom of alternator, and all over the cross member. Is it reasonable to assume it's the front seal in the timing cover? Or could the front of the pan gasket have leaked that much oil that quickly? I also checked the valve covers, and while there is evidence of weeping, there is nothing to suggest that's the problem. The strange thing is i fired the car up and ran it for 15 mins in the garage, and even holding it at 2-3000 rpm for extended periods, couldn't make it leak. Thoughts?

I think you need to clean it all off and then do some checking again.
That is a sizeable leak so I doubt the pan would do that.
I would suspect:
1. the filter (doubled up or no gasket?)
2. the crank seal
I

go to the car wash, powerwash it super clean, drive home and let it sit for 20mins or so then find the leak... and be happy it's not the rear seal.. front seal is like a hour to fix..

Im going to say loose oil filter or dirt on the filter gasket.

Im assuming its a big block?

Thanks guys. I washed and wiped everything down last night nice and clean, it was just too late to run the car. Pretty loud and I like my neighbors, lol. I should have mentioned, I did check the oil filter(Wix51515)and it was sufficiently tight. It was put on last year when I changed the oil. The oil pump and fuel pump bolts also tight. Tonight I'll run the car and find that leak. Yes, I'm glad it's not rear main seal. I'm hoping if it is the front crank seal that it could be done without removing the timing cover? Also, I read something about the damper somehow causing the leak? Like the damper is supposed to sit against the seal in some way. I'll know more tonight.

Don Frelier said:
I think you need to clean it all off and then do some checking again.
That is a sizeable leak so I doubt the pan would do that.
I would suspect:
1. the filter (doubled up or no gasket?)
2. the crank seal
Click to expand...

double oil filter gasket will do it every time. ask me how i know ....

Does it have a PCV and a breather?

RemCharger said:
Does it have a PCV and a breather?
Click to expand...

Yes, pcv on one cover, breather on the other.
I

you can do the seal without removing the cover (i believe, it's been a long time) as far as the damper goes, the spot where it rides on the seal can develop a groove over time which can cause a link, if thats the case you can try a new seal (which will be more flexible and hopefully ride better in the groove) but in the end if it's grooved bad i would replace it with a good aftermarket one.. all the old ones are well over 40 years old now and old rubber isn't good

A Speedy sleeve should be available to fit if the damper hub is grooved.
Mike

493 Mike said:
A Speedy sleeve should be available to fit if the damper hub is grooved.
Mike
Click to expand...

Some seals come with the thin sleeve which is supposed to be applied to the damper to provide a better surface for the seal to ride on.
If someone used one of those seals without installing the sleeve then yes it's gonna leak but not 1-1/2 quarts in no time I wouldn't think.

I finally got a chance to run my car in the garage to check for the leak, which I found was not the rear main seal, but somewhere up front according to all the oil at the front of the engine. Well I've let the car run twice, for 15-20 minutes each time, and I cannot find a leak. I've idled it, and I've revved it and held it at 3000rpm. Not a drop. Not one bit of oil sprayed anywhere. But, and here's the part that worries me. After the car was sufficiently warmed up, sitting at 180F, it started smoking again. Greyish blue smoke again. Coming what appears to be from the exhaust. This car has never blown blue smoke. While it's obvious something is leaking somewhere, I'm starting to wonder if there is something internal going on as well. Was going to let it cool off and do a compression check. Then maybe a leak down test. 2 year old motor. 3600 miles on it of easy cruising. God I hope this thing isn't screwed.

Two guys said check oil filter. You said it was tight. I'd remove and check for double gasket as DDG330 said before ripping it a part. To change the timing cover seal it needs to come off. That means drain coolant,remove alternator, PS and balancer need to come off. Do not pull the balancer off pulling on outer ring. It's more than an hour job.

This is what I see in my driver's side tail pipe. Not sure if you can tell but it's a creamy grey oil residue, and it has coated the entire length of the drivers side exhaust. Passenger side dry. Valve seals? A friend of mine was over and said the fact that it ran for 10 minutes and then started to smoke, suggests possibly valve seals. But that color of residue? Mixed with coolant maybe? There is no sign of coolant in the oil on the dipstick, and no sign of oil in the rad. Tomorrow I'll drain the oil and pull the filter, and look for particles of valve seals. Either way, my assumption is the motor is coming out and going back to the machine shop. 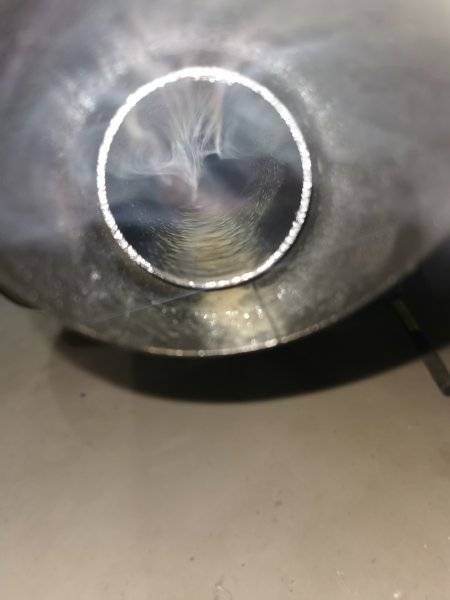 Well look at that. #7 cylinder intake valve pushrod right thru the rocker. I just hope there isn't lifter or cam damage. 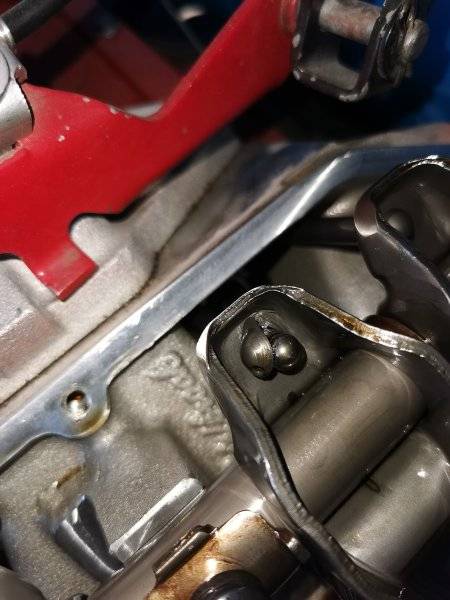 Lack of oil? Happen to me on a 318 put rocker shaft in upside down. I don't know about BB's.

Still a mystery what sprayed oil all around the engine compartment?
I

Usually that happens if there is lash as the pushrod hammers the socket instead of riding in it, you should have heard ticking though, really odd if those are factory rockers..


Mark1972 said:
Well look at that. #7 cylinder intake valve pushrod right thru the rocker. I just hope there isn't lifter or cam damage.