How many new vehicles have you bought?

Most of my stuff was bought used with my newest used vehicle being a 97 Dodge 2500 diesel that I bought in 2001 iirc and still have it. Even my first car was a family 'hand me down' but that was only 3 years old and was a 66 Belvedere. My last wife got a new Durango that I surprised her with and it was ordered with just about everything possible for a 2wd but my first new vehicle of any kind for me was an 81 Honda CB750 Custom. Even my first bike was bought used....and I guess I can say my 95 Dakota is a hand me down because I got it in 98 when dad moved on to the happy hunting grounds. The only new vehicles bought for me by me was the bike and a 92 Dakota V8 with 3.90 gears.

Maybe 4 or 5 including a 98 Dakota with a V6…..got into a lot of trouble with that truck.
Always seemed like a had a local cop, sheriff of trooper following me.
The used cars were more fun….

I have never owned a new car. All my old cars have been pre 1973 that I drive in spring, summer. Any fall,winter beaters are the disposable fwd toyotas. Those are mid 90s cars. Use them up, then scrap ..

Never a new one. The newest when purchased is my 1993 Dodge pickup that I bought the first week of January 1995. I still have it... 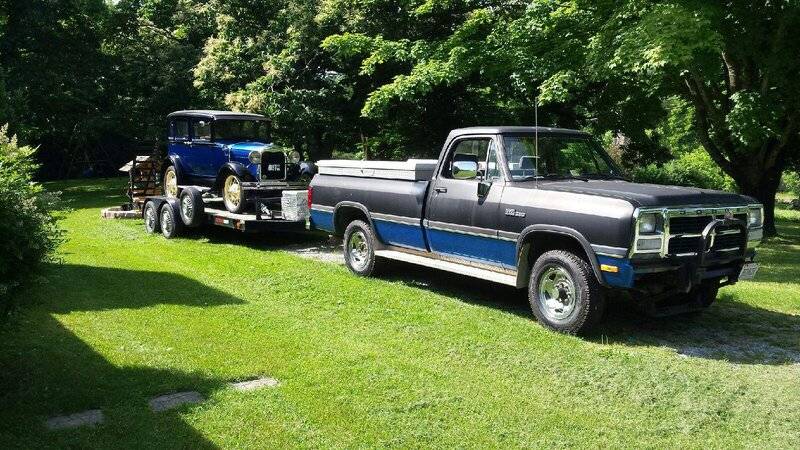 Not a single one. My daily driver is a late 80's rice burner truck. Had a ford ranger for about a month that was a 90's truck if i remember correctly. Got it for $2500 and sold it for $4500. That was the newest rig i've ever owned.

To me, that's the sweet spot where the factory warranty is still active but the depreciation is at near max value vs remaining service life.

slimt said:
I have never owned a new car. All my old cars have been pre 1973 that I drive in spring, summer. Any fall,winter beaters are the disposable fwd toyotas. Those are mid 90s cars. Use them up, then scrap ..
Click to expand...

Me too. I have bought 3 year old vehicles. My brain has a hard time with absorbing the big depreciation that occurs in the first 3 years of car ownership. (It's what I call. "Minnesota cheap.")

I bought a 78 Z28 new in Oct. 78, just after the 79's were coming in
got a steal on it
I'd have bought a MoPar Dodge/Plymouth car
but they had almost nothing but trucks back then

I had kids I bought or helped buy, cars, trucks & Jeeps for too
most weren't new
A couple were I cosigned for...

my Daily Driver is 22 years old now, wow how time flies
she's still near mint, with just over 60k miles
a 99 Dakota SLT 4x4 5.2ltr, new off the lot
(My favorite vehicle, I love the lil' truck)
it only had 1,900 miles the Sales manager, only drove it locally
It was org. a sales demo
With a bunch of minor mods, better slotted/drilled brakes, bigger tires,
1.7:1 HS rockers, Hypertech tuner, AEM airbox/swirl spacer, gauze filter etc.

I did contract out & work for a large dealership group
most my adult life, with spells of different stuff in between
I got some great deals on quite a few
Last edited: Sep 2, 2021

Don't need a new vehicle because i have 3 mopars to keep me broke!

I bought a ’73 340 Challenger in ’74 that was a demo with 3k on it. Only brandy new car was an ’89 Eagle for the wife’s driver that was a mistake…got a deal on it thru a relative working at a mopar dealership; but bad timing for that ride, total POS with inherent electrical demons I dumped a couple grand fixing selling it before it had 60k on it.

For some 20 years I had company cars and bought a few of them after turn-in time for the wife and kids. I moved on to buying few year old rides with lower mileage that worked well over the decades, avoiding insane depreciation for my own-biz cars after I left the company giving me company rides. And getting X warranties has worked great on more occasions than not. Had a motor repair costing $4800 that was covered, another (my 1st Ram) trans went out 2 months before warranty expired $2,900 covered…among two others I recall offhand.

Now – checking around on new and newer trucks the prices are too nuts for my taste. Could fork out; but also going to build another garage. Have an ’05 Dakota Laramie well optioned, AWD now with 83k on it I bought in 2015 getting rusteee. Decided I’d do a body transplant rust-free box and repop fenders and drive it till I’m done. Being retired now the miles I used to drive have dropped like a rock anyway. The box I got for a grand is like new. Undercoating all and taking it to a shop for paint.

I finally have a rig!

Do you have a "nose" for sniffing out cars?

My Son Just Bought a Mopar

I bought these two old MOPARS.