Last night, I wound up doing a few forum searches, trying to figure out if I needed to change my firewall bracket for my disc brake (non-power) conversion (I was also inspired to do so after reading this thread).

After sorting through all the info I found, I realized that the firewall plate variants are really quite easy to understand - provided all the information is in one place, separated by year. But it isn't...so #newthread.

I compiled everything I could find and assembled the following chart below. For the sake of identification, I copied a few photos that I found here that demonstrate the differences, and credited the sources (hope you fellows don't mind), as I'm not lucky enough to own every single plate made.

Would also be glad to edit and update this as more information comes out. One of the things that I can't find yet is a photo of the bellcrank on a power brake-equipped '65 (which I'd assume are rather unusual to begin with). 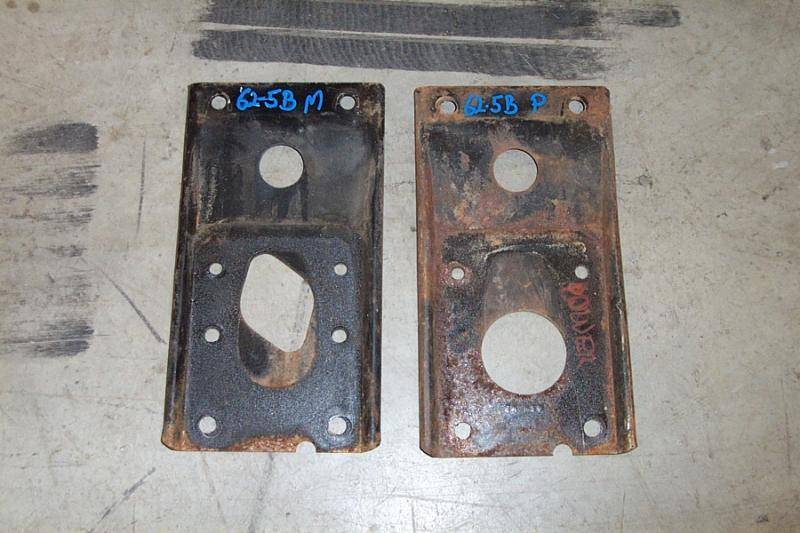 NOTE: 426 HEMI applications use manual master cylinder firewall plates and a much larger bellcrank that's built into the booster standoff (photos of this complete assembly shown in last section below). 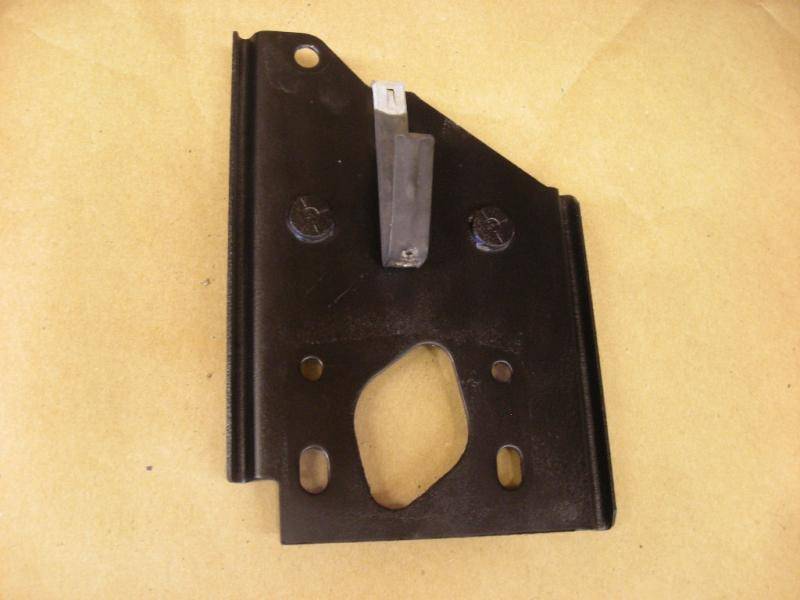 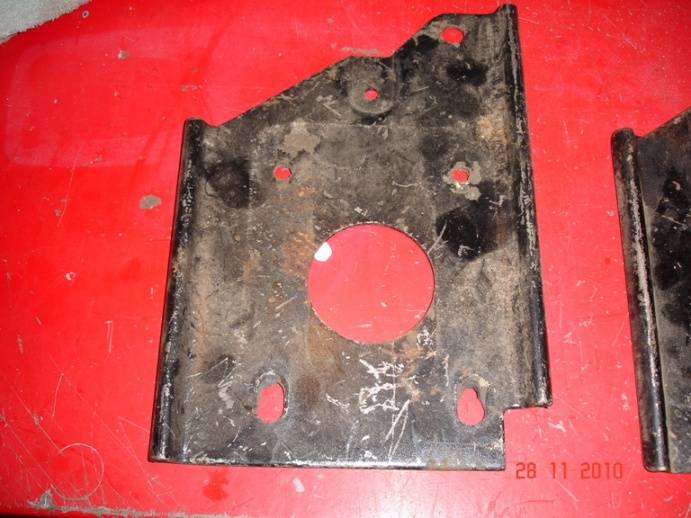 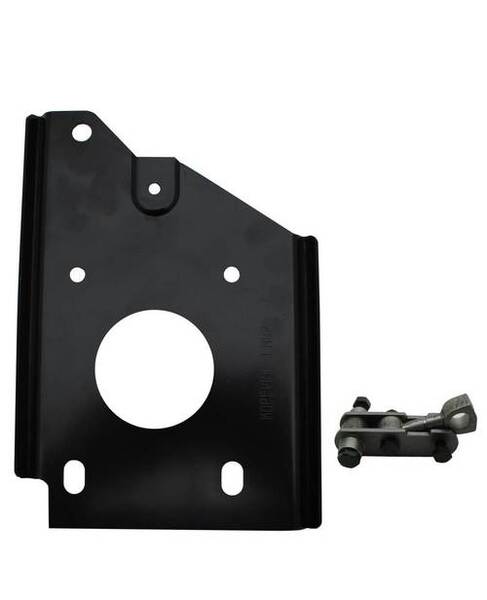 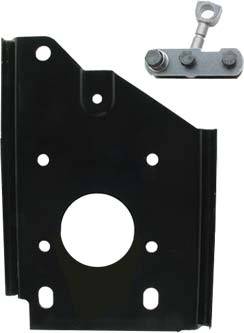 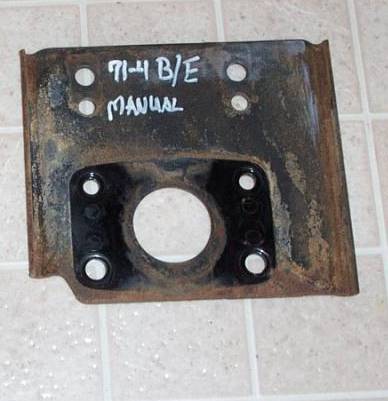 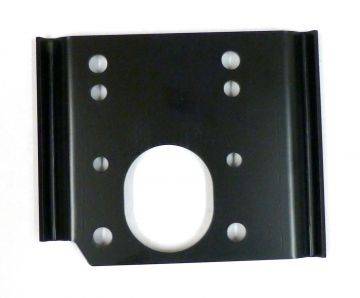 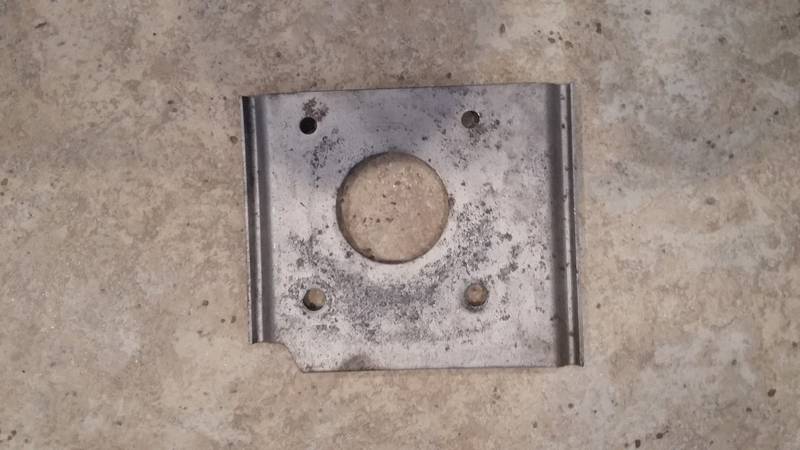 Reproduction (shown from the rear, rotated 90 degrees) | NOTE: Some sites show a stock image of this part, but show it six holes that don't appear to line up with the original. These places have Photoshopped the '66-70 power bracket to look like this. 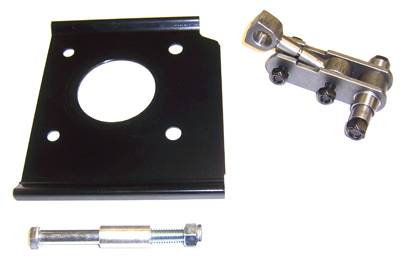 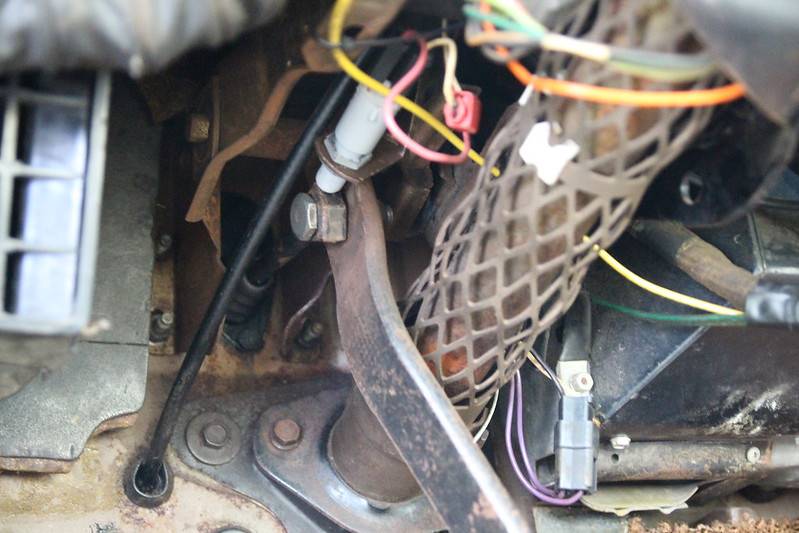 Power booster w/bellcrank for 1966+ applications, bellcrank pivots from bottom. Note: I believe 1965 is inverted and pivots from the top, but have not found a photo of one | Photo: moparmarks: 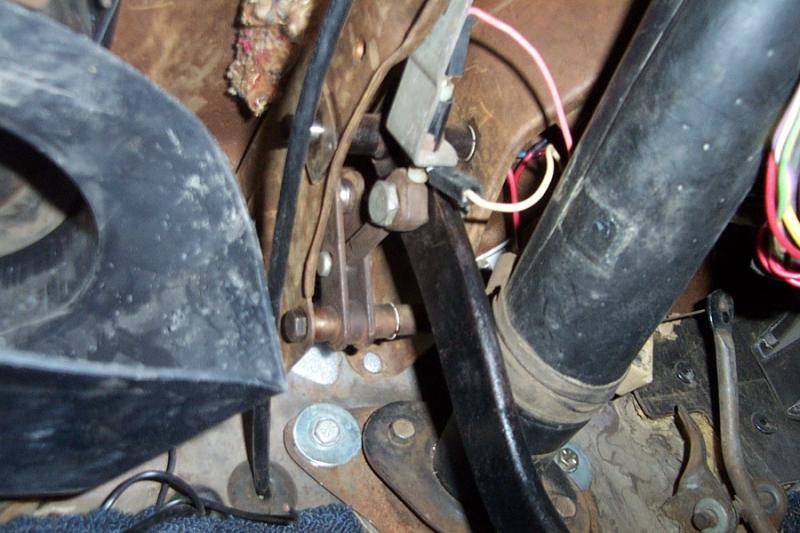 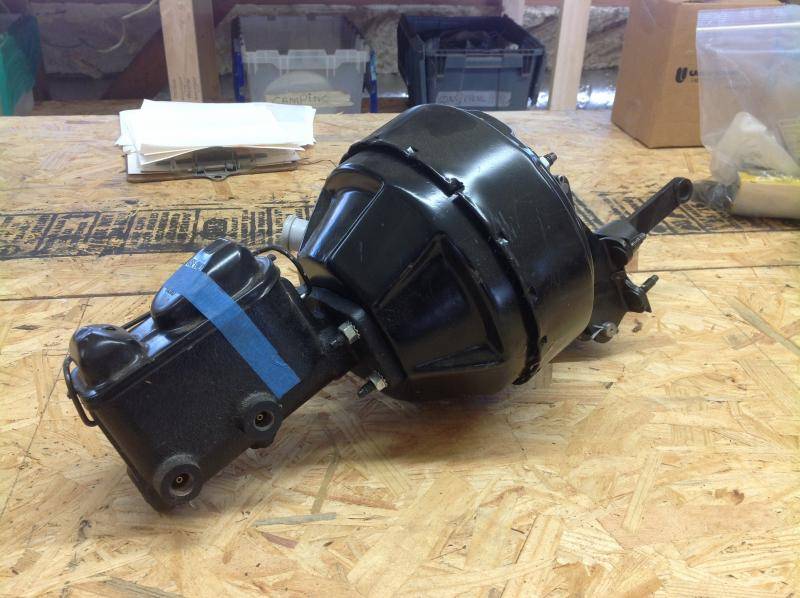 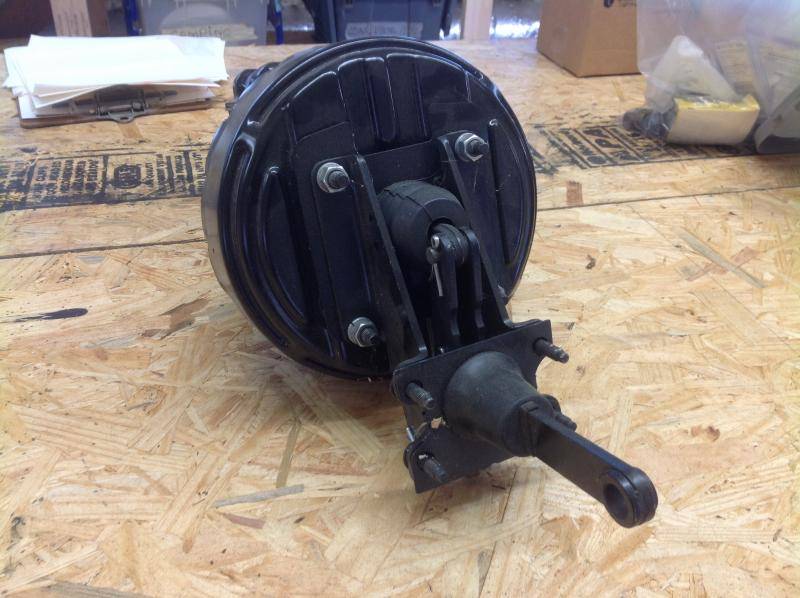 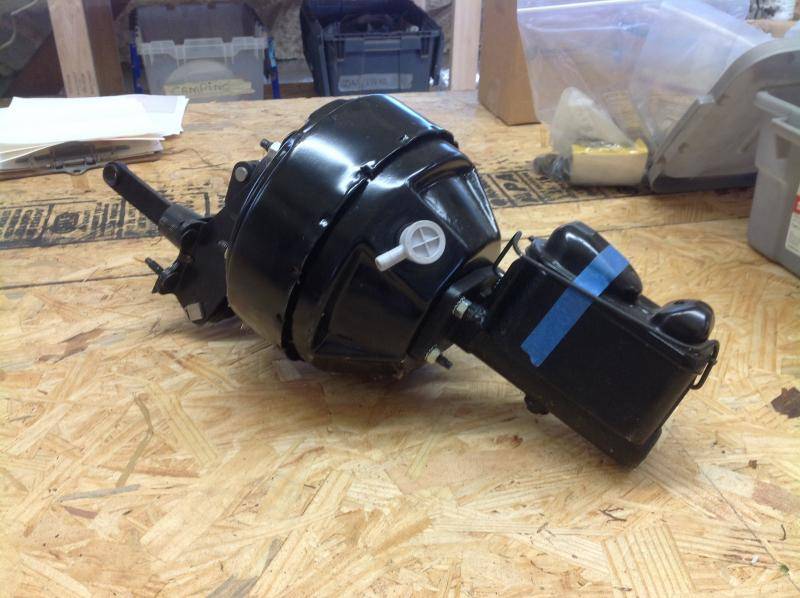 That's it - six plates with eight unique factory applications, spread over three generations of B-bodies. Not really that complicated.

Someone DM'ed me about where you can get the Hemi offset bracket.

There's a cad-plated Gen II Hemi bracket only that makes the rounds as a "1965-1970 Mopar Brake Booster Bracket." They're usually sold as a "power brake conversion bracket" for A/B/E Bodies. Part of that marketing makes me think they're taking advantage of people that don't read this thread and aren't aware of the proper bellcrank for B/E bodies without Hemis, but that's another story.

Either way, they're on eBay and other places. Play around with the search keywords "Mopar Brake Booster Linkage" and you'll probably find them eventually. Here's a link to an overpriced one ($98 - the same bracket is listed new on eBay for $58), on Speedway Motors - though the link will probably be dead in a year or two if they modify their website; seems to be the case with most links I find in older threads:
https://www.speedwaymotors.com/1965...5o6OGhCfTHIcTypV7eVkjKhfCjbumnQBoCs8MQAvD_BwE 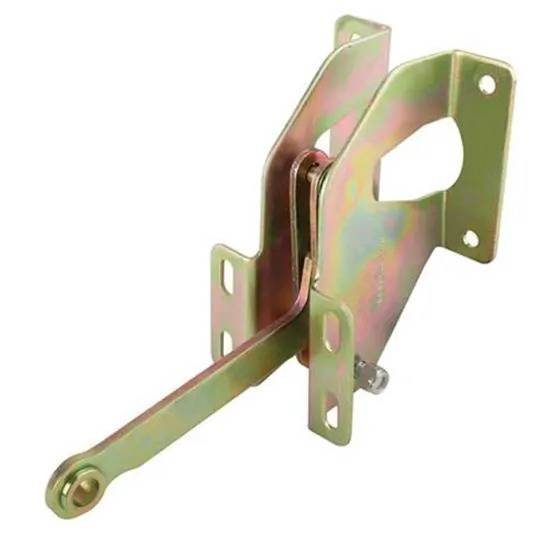 Dr. Diff sells a different reproduction with the booster. This one is painted black and isn't from the same tooling. You'll find it a $225 option in the menu.
https://www.doctordiff.com/bendix-style-dual-diaphragm-booster.html 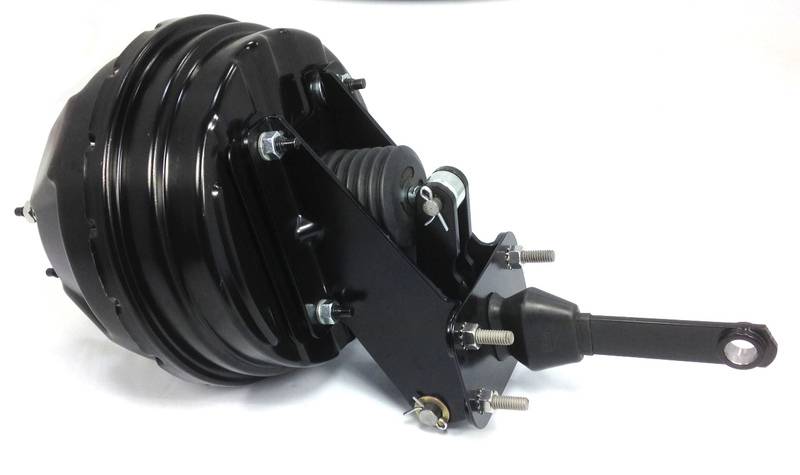 This said, I wouldn't fault anyone for installing one of these offset brackets on a daily driver with an LA or RB, and I'd recommend it if your build prioritizes maintenance over originality. The Hemi bracket makes servicing massively easier if you have to pull the booster, as the nuts are relatively accessible. Ditto for the master cylinder - no more unbolting it from under the dash and around the pedal box.

There's a very good reason I recommend the Hemi bracket for servicing: Removing a firewall-mounted booster from a fully-assembled '66-70 B-Body is a job invented in the fieriest depths of hell, and I sincerely hope the engineer who came up with the design is there now - and is being used as a voodoo doll.

It's one of those things where I'm still utterly mystified why Chrysler engineers were so intelligent with the A-bodies (knurled studs from the firewall out) and so stupid with the B-bodies (knurled studs on the master leading to one nearly inaccessible hole, and one totally inaccessible hole). This repeats itself all over the dashboard areas of these cars - A-body is an intelligent joy, B-body is a maddening mess. Doesn't make sense.

Kurt so im still a little unclear untill i lookat more brackets. But your help is priceless. My next project is ac box. I want to find a motor that is real short so i can put the traditional air ac box in the car with a short blower motor so hemi valve cover wont hit the blower motr any idea where to find?? I have the bracket btw for hemi booster but im hoping the off set one your talkin about is considerably more off set

snakeoil24 said:
I have the bracket btw for hemi booster but im hoping the off set one your talkin about is considerably more off set
Click to expand...

There should be only one HEMI-style bracket - they probably all follow the same specs, and thus are offset vertically the same amount. If they didn't, there would be linkage ratio differences.

Perhaps there are alternates, but I haven't tinkered with any of them to find out. I've only played with the standard bellcrank and booster repops.

Funny enough, and after having my repop booster leak and endless master cylinder issues (upper cover leaks + surface rust + fluid leaks), I lost patience and went straight back to manual disc/drums, installed the two-bolt master adapter plate, and fitted a modern aluminum master. Archaic, but it simplified the system, and it still feels good. It also made it a cinch to pressure bleed the system (which, in my case, was a necessity due to trapped air that was proving an impossibility to purge via conventional pedal bleeding).