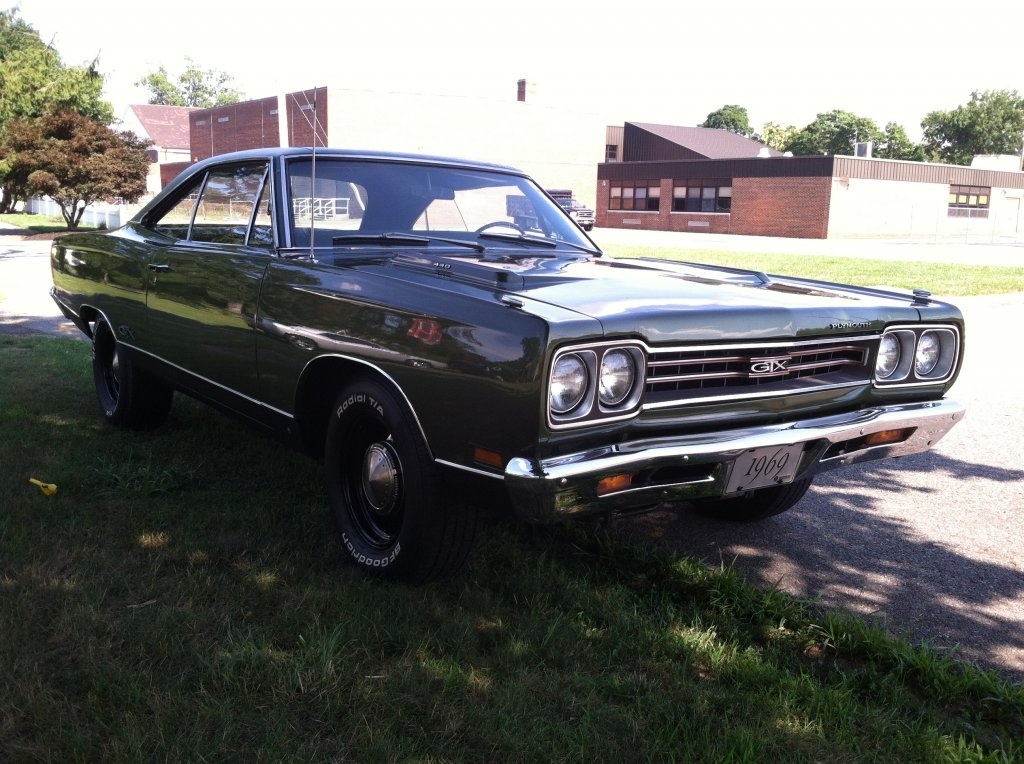 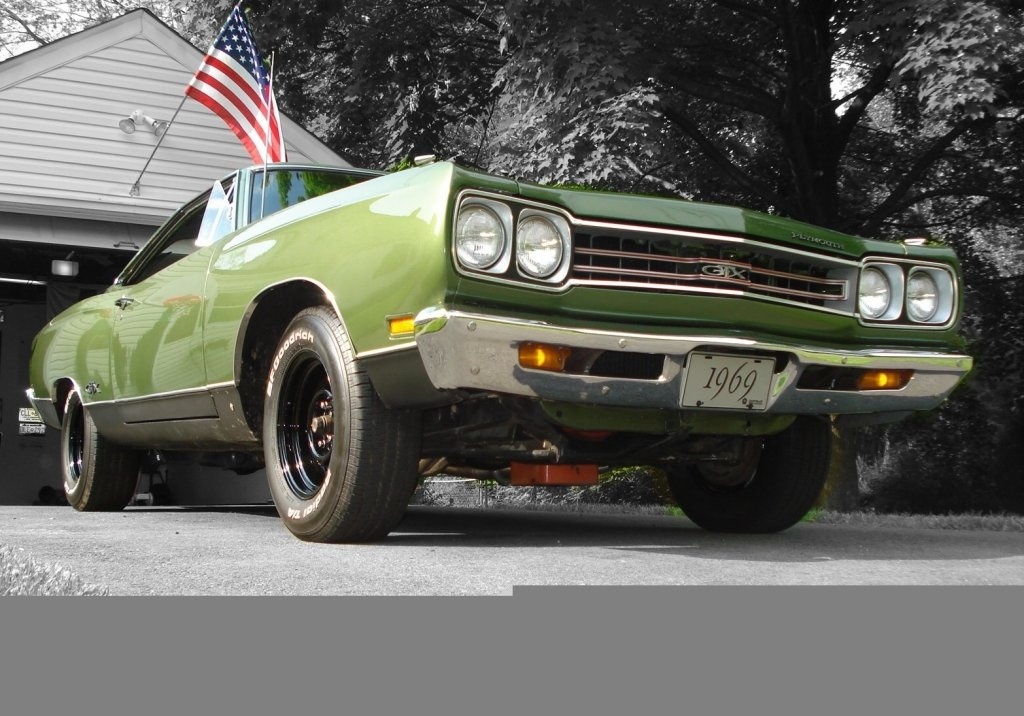 Selling my 1969 Plymouth GTX. I’ve owned this car for 10 years. I bought it off of the Moparts.com website in June, 2007. I bought it from a gentleman in Philadelphia, PA. It’s been in northern NJ ever since. I don’t know anything about the ownership history other than that.

The car is a 1969 GTX, F5 Green, green interior and a green vinyl top. The triple green color combination is fairly rare. There are a lot of green GTXs out there but triple green is not that common. The car was ordered as a 440, 4 speed, track pack car. It has the Hemi 4 speed and Dana rear with 3.54 gears. The transmission is numbers matching with the VIN stamped on it. It has a Hurst competition plus shifter. I have the fender tag and broadcast sheet. The VIN is clearly visible on the radiator support. The car was built on October 24, 1968 at the Lynch Road plant so the fender tag is a little “different”. The fender tag calls for a center console (C16) but the broadcast sheet calls for a center arm rest / buddy seat (C21). The car has the center arm rest / buddy seat in it. The car was ordered with manual steering and manual brakes. It has the heavy duty suspension and 11” drum brakes all around.

The engine is not numbers matching. It is a 1968 440. The engine was rebuilt in 2005, before I owned it. I have some receipts from the build but not all of them. The engine runs strong and reliably. The transmission was rebuilt in 2007 by Mike Bonsanti of HP Motors in Morristown, NJ. It performs flawlessly. HP Motors also rebuilt the cylinder heads in 2014. The car has headers, a Holley carburetor and a Weiand intake manifold. I don’t know the specs of the camshaft but the car runs and idles easily once it’s warmed up.

The front suspension and front and rear brakes were rebuilt in 2014. I replaced the ball joints, control arm bushings and sway bar bushings. All four shocks were replaced. The front brakes received new 11” drums, all brakes got new shoes, springs and wheel cylinders. Master cylinder was replaced in 2016.

The body was restored/repainted before I bought the car 10 years ago. The paint shines nice and the car looks great. The paint is not concourse quality but it looks good, even up close. The trunk pan has a few pinholes. The inside of the trunk is unrestored and has original paint throughout. It still has the crayon assembly line marks for the spare tire size. The trunk pan is still structurally sound and doesn’t need to be replaced other than for cosmetics. I keep a trunk mat in the car and the trunk area looks fine for show purposes. I was told that the car received a patch panel in the passenger side quarter panel, behind the rear wheel, before I bought it. This area still looks great and you can’t see any evidence of that. I have a few photos from the restoration and the car looks like it was always very solid. There is a small patch panel in the front foot well area. This is still in good shape and has never been a concern for me. I was told that the vinyl top is original. The resto photos that I have show the top on the car, so I think it is the original top. The top itself is in great shape but some bubbling is occurring along the front edge above the windshield and some other areas which might need attention. All of the trim that is unique to a 1969 GTX is there. The taillight bezels and trunk trim panel are pitted but they are presentable. The vent window trim is a little pitted but the rest of the chrome and trim is in good shape. Bumpers, grille and outside mirror are in excellent shape, they were replaced before I bought the car.

The interior is in good shape. The door panels and carpet are showing their age, they might be originals. The rear door panels were replaced by me several years ago with parts from Legendary. The dash and dash pad are in great shape, the steering wheel has a few cracks in it. The lights, turn signals, wipers (3 speed), horn, gas gauge and AM radio all work like they should.

This is a real deal 440, 4 speed, Trackpack GTX. The manual steering, manual brakes and lack of A/C mean that this was not your ordinary gentleman’s musclecar like many other GTXs were ordered to be. I think of this GTX being ordered like an A12 car before the A12s came out.

This car has been to Carlisle, PA for the Chrysler Nationals Show at least 6 times. I’ve driven it every time, about 180 miles each way and it always performed great.

The car has a clear NJ title and it’s registered and insured so in-person inspections and test drives are welcome, weather permitting. I have receipts for some work done before I bought the car and for everything since I’ve owned it. I’ve had this car for nearly 10 years, I still love it and I don’t need to sell it, I’ve never advertised it before, but an opportunity for another car has come up so I’m offering the GTX for sale for the first time. Asking $39,000. Lots of photos, videos, documents and receipts available to see. Car is in Pompton Plains, NJ.
Last edited: Jan 24, 2017

Nice car. I have seen it at Carlisle. A very close twin to my car.