MarkLevi said:
Would concur. Even IF that 1st digit was a crazy-stamped "1", that's May 5 '68...probably later than the current speculation of SPD.

Yup - to the left and the right ...and - @fesser ; while you're rolling around on the ground, you might as well get the transmission numbers, too. Might be more clues there. Reference image attached if you're unfamiliar with those - the format is much like the engine numbers on the pan-rail ear by starter.
View attachment 1364807
Click to expand...

I will try again tomorrow. I am limited (back issue) in my ability to get into most of these areas which is extremely frustrating. The trans number search for certain will require an able bodied assistant. Thanks for the reference photos. They really do help.

Some more bits of information. The engine casting number is 2536430 10. This was pieced together by bits and pieces of pictures taken with the inspection camera. Not sure what the 10 at the end means but it was throwing us off when we thought that they were the last two digits and it didn't match up to any of the number charts.

Finally got to see the casting date, 3-28-67. Since I am practically an expert now, I am going to say that it is not the correct engine for this car since helpful, knowledgeable, people who have been able to put the likely birthday for my car would be March or early April 1968.

Friend of mine pulled a valve cover and confirmed that the heads are 906's, but the valve cover was replaced without noting a production date for the heads. Not that it matters.

I do have another question. Considering that this car was built in L.A. is there an engine date (the one on the pad up front) that would be too close to the cars build date to be legitimate? For example, 3 5 up where it says D440 HP, in a car built 3rd week of March.

I have a car with a SPD prior to the engine assembly date, the car was built late..... I've also seen cars with original engines assembled 18 months prior to the SPD... But generally a three month window is typical...

69Coronetrt said:
Here's the best I can do for you:

I kind of missed the part about seeming "a little out of order" the first few times I read this. Can you explain it please. Thanks.

1 Wild R/T said:
I have a car with a SPD prior to the engine assembly date, the car was built late..... I've also seen cars with original engines assembled 18 months prior to the SPD... But generally a three month window is typical...
Click to expand...

Thanks. I am trying to avoid going down the rabbit hole of matching numbers, especially since my engine isn't a match, and I have no fender tag or build sheet so there is no "matching numbers" potential for my car. But I think what I am looking to do is avoid the flagrant incorrect details that have to do with the car's pedigree. For example, I would like the engine to be "HP" with a date on the front pad that would usually be considered "not wrong" even if it wasn't a matching number thing. By the same token, if I find a stock air cleaner, I want the correct one for the year, even though others are similar.

What do last numbers in block casting mean?

Good article. Thank you for posting that.

fesser said:
I kind of missed the part about seeming "a little out of order" the first few times I read this. Can you explain it please. Thanks.
Click to expand...

That would indicated ~4,000 cars a month. That, at first, seemed a little high for production at the LA plant but upon further consideration, that may be about right.

I squeezed under the car and was able to get most of the numbers off the pad near the starter. Using the info from 1WildR/T, I was able to determine that it was built in Trenton on Thursday, 10/5/67 and that it was a P (not S) fuel car. The S was something I was still kind of hoping to find. I didn't clean enough of the pad to read the last three, of the Four-digit assembly number but I don't care enough to get back under there for that information. So, I have an engine cast on 3-29-67, assembled in Trenton on 10-5-67 (second shift) non-HP stamped engine, that has no VIN stamped on it. I guess that about sums it up. I have yet to get the car in a position to try to find numbers on the transmission. 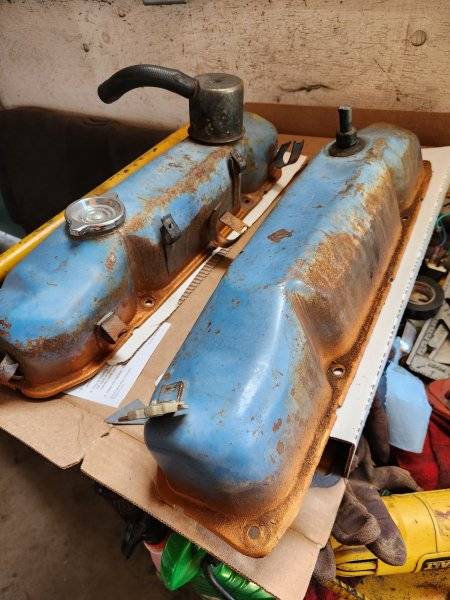 Fesser, I tried to attach these on a DM and it won't let me. they are free to a good home.
You must log in or register to reply here.