What's the first car that you drove over 100 mph?

QOTHL said:
Well, it's probably not worth mentioning doing an average of 100 in a Chevy cargo van from Columbus OH to Richmond KY in about 2 1/2 hrs, not worth mentioning hitting over 100 in a BMW 5 speed or a RAM 1500. But I guess I just did. What is worth mentioning is blowing the doors off of some clown with a hopped up Chevy 350 and hit over 120 easy in my first 69 Dodge Charger 440 727 auto.
Click to expand...

Cool. But your last sentence is super cool.

Old guys and old stories, bin there a done it !

We were on the way to a car show and this guy started making faces at me in the next lane on the BG Pkwy. That car has a PTK so it didn't take much to roast this guy. He asked me later if I saw him in the rear view mirror hit his power curve

and couldn't keep up. I didn't see him at all after the kick down and kept my eyes on the road. Wish I could have kept accelerating because it had plenty left. I was worried about cops.

My first car in 1997. I had a 79 chevette. Exceeded the high pitched scream of high RPMs to having this odd, low roar/growl. Thought the motor was going to fly apart. I was leading and that's all that mattered back then. Lol

If my friend wouldn't have been with me, nobody would have believed that car could exceed 100.

That old 440 in my Gtx, was a one in unlike any I had seen before or since in stock condition, super fast and very quick , my buddy was doing new car make ready at the dealership and said of all the other hp cars he had driven it far exceeded them all , so I took it for a blast and came back to work and bought it! Of course, to be fair about this, the older you get , the bigger the fish and faster the car , I guess! Oh ,but what fun it was to be Mopar Guys in the late 60’s and Chrysler was all in with it ! There were six Mopar guys in Conroe and everyone else were the other guys ! Our secret weapon, was an older guy , who was a Howard Hughes ,Master Machinist and good equipment! His son was one of us and he read about the tricks and we made them happen ! Oh btw , after a four day Super Stock Eliminator meet at Dickinson Drag raceway , she ,Shirley Shanahan beat me by a headlight and I was poorboying it and she had sponsers! Wish you young guys could have been there with us !
Last edited: Jul 28, 2021

My first was my 1947 Plymouth Coupe, had two buddies with me, passed a county cop and his partner going the opposite direction while going down a hill. They ended up giving my dad a ticket for signing the owners card in pencil. The sheriff said his captain would never believe I was going over 100.
Last edited: Jul 28, 2021

Unfortunately mine was an 81 Camaro, it was my first car, what I could find and afford. In my town growing up in the 80's you just didn't see classic Mopars, still rarely do except for mine even today.

My race cars used to run over 100 at the track, but the only time I recall trying out top end on the street was my 68 Formula S notchback 340 auto, with 3.23 gears. The speedo was indicating 130, I remember checking the tach and it was around 5500 rpm which seems about right.

moparedtn said:
1968 Chevelle. First car I owned capable of it.
Notice I didn't say "safely" in that statement...
Click to expand... 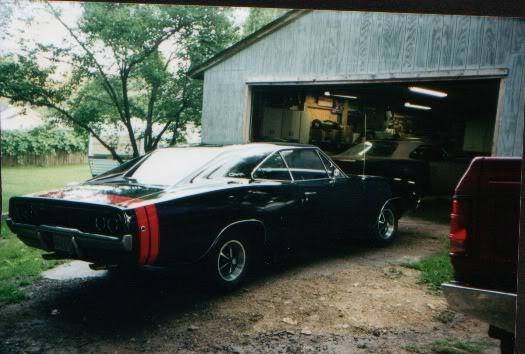 Mine was a buddies 1971 Ford Gran Torino /351Cleavland auto trans, RED, less the white scalop. Me and the owner and my best friend were getting Hammered at a place called Saint James Infirmery in Mtn. View Ca. when they decided that I was the least drunk/best candidate to drive. I hit the 87 freeway headed towards my place in the Sunnyvale/Cupertino area. As soon as I hit the on ramp the cars owner in the back seat starts vomiting, outside, inside, it was awful. So my friend and i in the front seat with the windows down and I'm keeping the air circulating by passing everything on the road, including the California Hiway Patrol. He pulls us over and it had to be obvious that we were all drunk but the deputy asks me why he pulled me over and of Coors I say no. Then he gets a whiff of the smell coming from the back seat as he's still spitting gallons. So he puts a handkerchief over his nose and asks where we were coming from and I told him and where we were going and i told him my house and where. He says I clocked you in at over 110 and I said deputy that's pretty good for this old Ford and the last sign I saw said 87, and you said we made it past the 87 mark the sign suggested but we're coming up on the 280 next and quite frankly sir I don't think this thing will do 280. He busted out laughing blowing his tissue into the back seat ( where he wasn't about to retrieve it from ) and through copious amounts of laughter said, "Git on outta here git home and keep it under 100." My best friend and I looked at each other for a moment and then I fired that mother up and kept it under triple digits just for that deputy. The second time was in my 1966 Coronet 500 police hi performance 383 / 727 floor shift 3 spd auto 117 before backing out of it. True story. Would never happen these days. Thank God.

1978 Ford granada, 250 inline 6 c4 auto and highway gears. you can assume correctly that it took some time to get there.

My first car, Dodge Charger
You must log in or register to reply here.

M
Looking for my 1970 Challenger