A stock car flammin with a loser at the cruise control!

Kern Dog said:
That is the second time that I have heard that guy's name. I still don't know who he is.
Click to expand...

Ian has a show on motor trend television,called Full Custom Garage. He is an amazing fabricator. He makes incredible cars and motorcycles out of junk people have hanging around! He uses old school techniques and equipment to make some really cool stuff. He has taught me a few things, and I am not afraid to tackle anything!
Last edited: May 27, 2020

This original Daytona wing has a new purpose! 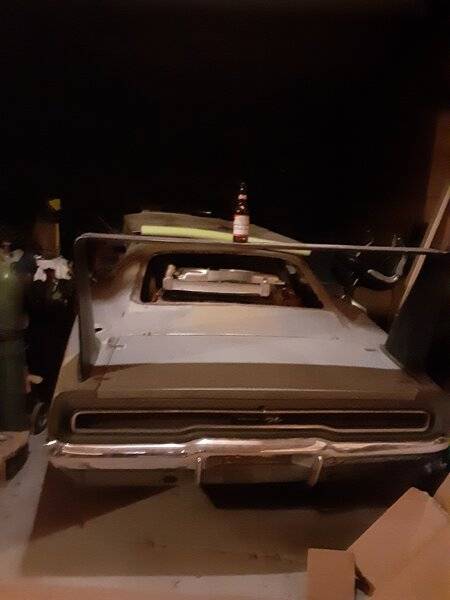 This is a picture of the underside of the new hood for the stock car. I cut out and welded up the stamped gussets of a standard 70 Charger hood that interfere with the latch tray on a Daytona. 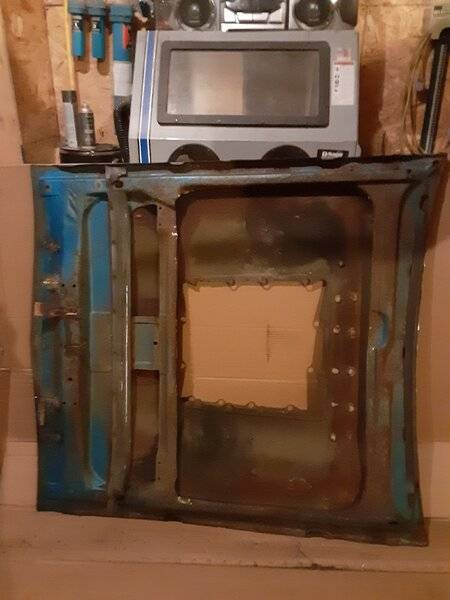 Now we can get the full effect of the new hood for the Daytona stock car. 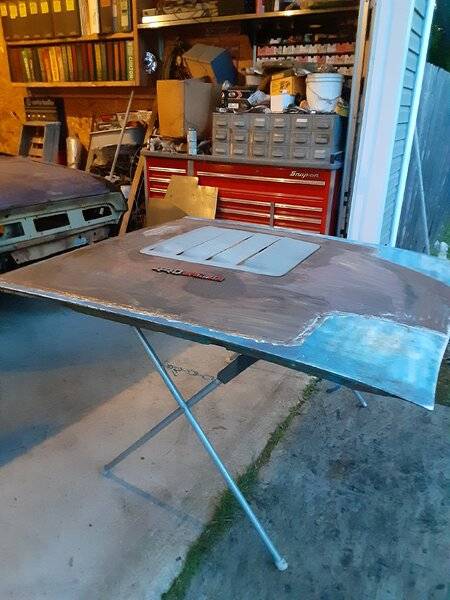 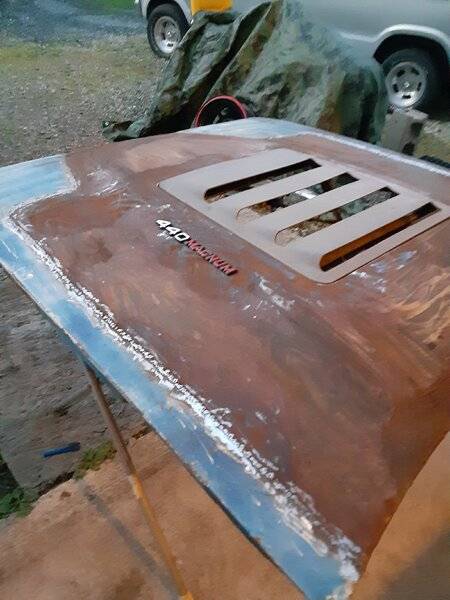 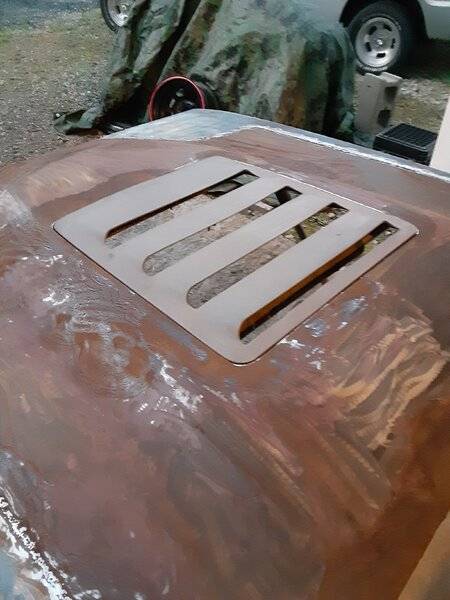 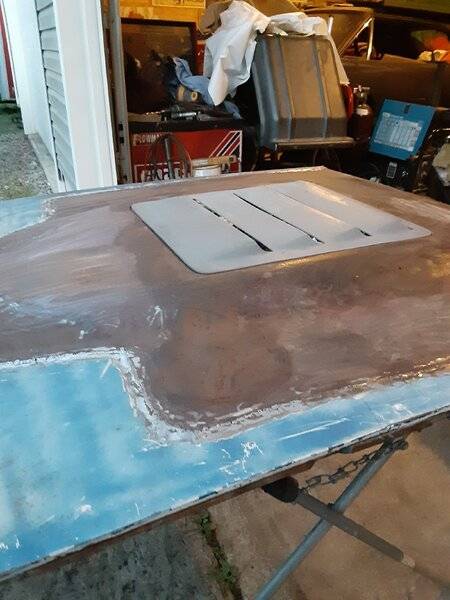 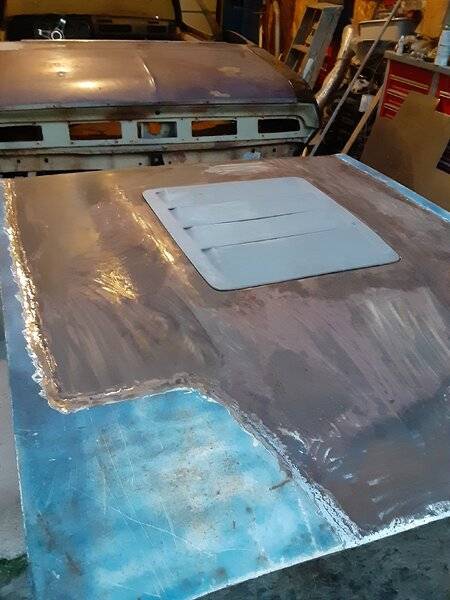 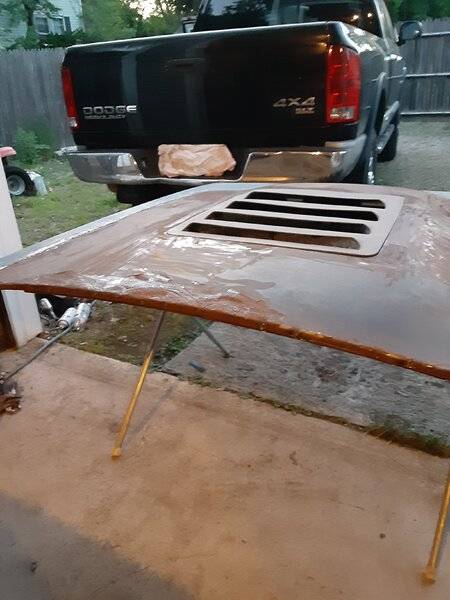 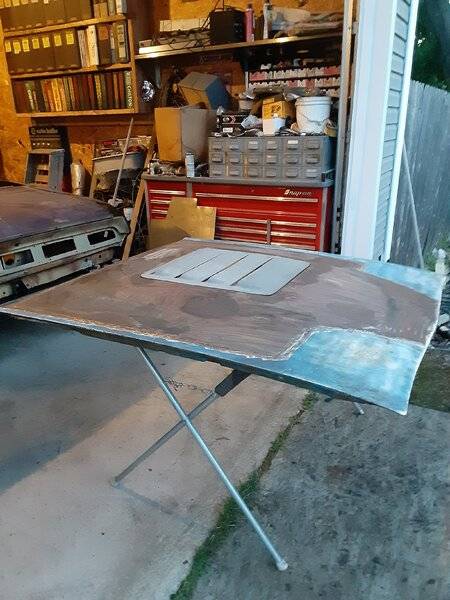 I got a little bit more done on the hood today. 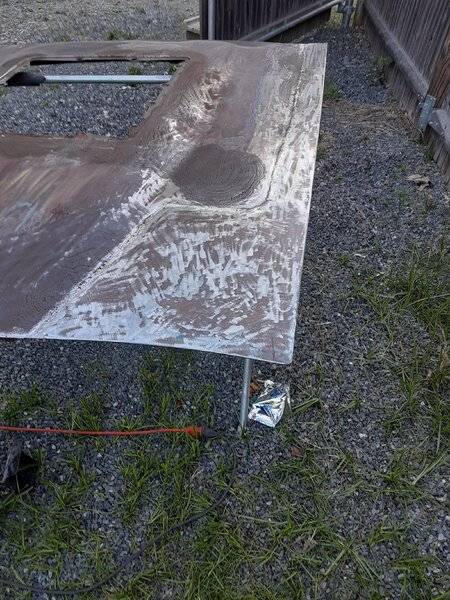 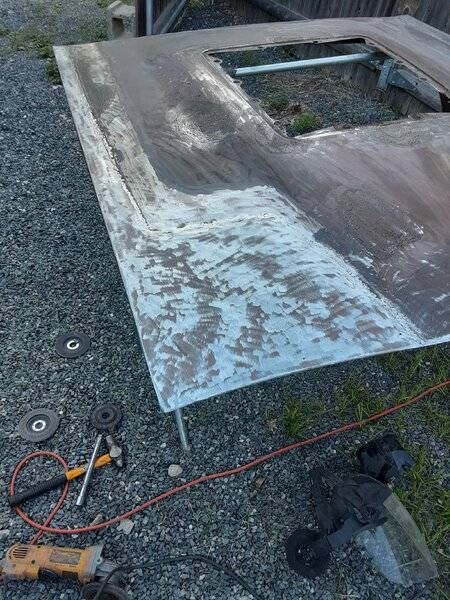 I am hoping to get to the engine shop on Friday and get an update on the engine progress, hopefully some progress has occurred! I have not updated the thread in a while, because of the heat, not much is happening with the car.

Well no good news from the machine shop,he said that because of the Virus,it has slowed the process of getting the needed parts for the engines that are ahead of mine on the list! Oh well!

I'm doing my time in machine shop jail! I thought being in regular jail everyday was bad enough, now my Hemi's doing time too!

Well I went to the machine shop,and he said he intends to start my engine build within a month,so I hope to have some progress to report soon.

Is that a 70 Challenger drop top in the pics above?

Tell us about that AMC engine I saw in one of the hemi block pics.

Cranky said:
Is that a 70 Challenger drop top in the pics above?
Click to expand...

Yes,that's my wife's Challenger convertible, it's an original plum crazy purple car with a white top and interior. It's an L code 383 automatic car. We bought it from the original owner who bought it new when he was 18 years old. He wanted an R/T, but the insurance company said no, so he checked off the boxes for a rallye dash, a sport hood and dual exhaust. After he got the car home, he added a new cam lifters and valve springs, and a pair of closed chambered 67 440 heads and he had his insurance beater almost R/T.

theman440 said:
Tell us about that AMC engine I saw in one of the hemi block pics.

About 5 years ago, I was looking at Craigslist ads,and I saw an ad for a 69 390 4 speed AMX,for sale in the auto parts section. The asking price was $700.00. I know that you can't buy the hood for an AMX for that money, so I called the guy up. I told him that I would come right now and buy the car,he said that I couldn't see it until the next day, and he would call me back at 9 AM. So I thought to myself, that's going to be sold, and I won't ever hear anything back from this guy, but the next morning, he called me right at 9AM! I couldn't believe it. I was so excited to get the car, that I had forgotten the keys to unlock my car trailer! So I went to look at the car without the trailer in tow,and bought the car on the spot for the full asking price. I told the guy that I would be back to get the car after my wife left for work at 3PM. My wife was already annoyed that I went to buy the car,so I couldn't go back home and get the keys to the trailer and leave again, so I had to wait for her to go to work before going back to get the car. So when I went back in the afternoon to get the car. When I get there, the seller wanted to renegotiate the purchase price, and I told him that I already have the signed bill of sale and the registration signed over to me by him, so either I was going to load the car on the trailer or the Police would load the car on the trailer, which way would you like to do it, so he reluctantly helped me load up the car. He said that his phone was ringing all day and he was offered 5 times more than I paid for the car. I told him that I gave him his full asking price, and that he needed to learn to research what the value of the item you are selling is worth before you advertise it for sale! I told him that he knew how to use his computer to place his ad,then he could also use it to do research before placing his ad. So the car was taken apart in the 80s,but is 95 percent solid and was mostly complete except for the 390 engine. After 3 years of searching for a 390 engine, I had decided that I would put a 5.7 Hemi engine in the car,and build a restomod out of the car. I posted a thread on Moparts about putting a modern Hemi in the AMX ,and most people on there didn't like the idea of that. So one guy on there said that he was going to put an LS engine in his 68 390 AMX,and would sell me his complete running 390 engine for two grand. The problem was that I am on the Massachusetts/Rhode Island line and the engine was in Las Vegas Nevada. I said that I would love to buy the engine, but the shipping costs would make it impossible to afford. He told me that he could put it on a pallet and ship it to me fairly cheap, so he got me a quote from Fastenal. For $200.00 they shipped the engine 2500 miles and put it in my truck with a fork lift! I couldn't believe it! The engine is complete air cleaner to pan with alternator power steering pump, pulleys and two radiators with fan shroud! My friend has the engine right now and has refreshed it with new bearings and gaskets and it's ready to go in the car. I dropped off the T10 4 speed transmission to the Transmission guy yesterday to see if I can get it rebuilt.
Click to expand...

chargervert said:
Yes,that's my wife's Challenger convertible, it's an original plum crazy purple car with a white top and interior. It's an L code 383 automatic car. We bought it from the original owner who bought it new when he was 18 years old. He wanted an R/T, but the insurance company said no, so he checked off the boxes for a rallye dash, a sport hood and dual exhaust. After he got the car home, he added a new cam lifters and valve springs, and a pair of closed chambered 67 440 heads and he had his insurance beater almost R/T.
Click to expand...

There was a lot of that going on back then. I bought a 70 hard top that was similar but it didn't come with the rallye dash or the sport R/T hood but had the 383 4 bbl, performance exhaust manifolds, disc brakes, and dual exhaust (non RT tips). It even had the valve springs with dampers but it sure didn't run like a 383 RT. It was a nice car for 2 grand in 1980 though. Did buy an R/T 440 70 covert that was fully loaded shortly after for 3000. It was a driver but needed paint (also plum crazy) with the longitudinal stripe and white gut. With 100k miles on it, it still ran pretty and ran a 14.20 on nearly bald Good Year GT radials through an exhaust system with more patches and clamps than a burned out Hindenburg!

I think that we paid 4 grand for this car in the early nineties. I also bought this 71 Challenger convertible for $1800.it was hit hard in the drivers side front, I put a whole front clip on it from the transmission crossmember forward. Those were the days when Challenger convertibles were still affordable! 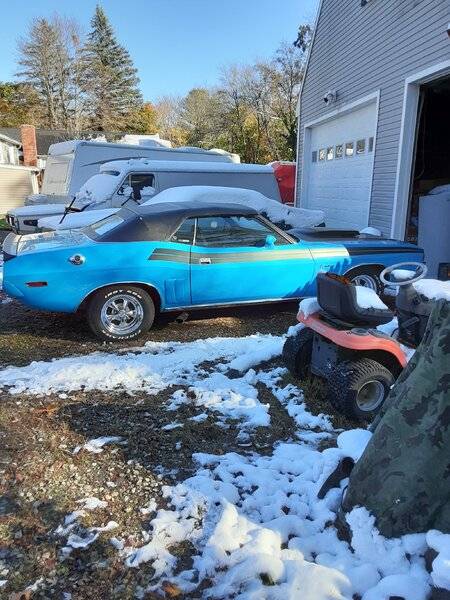 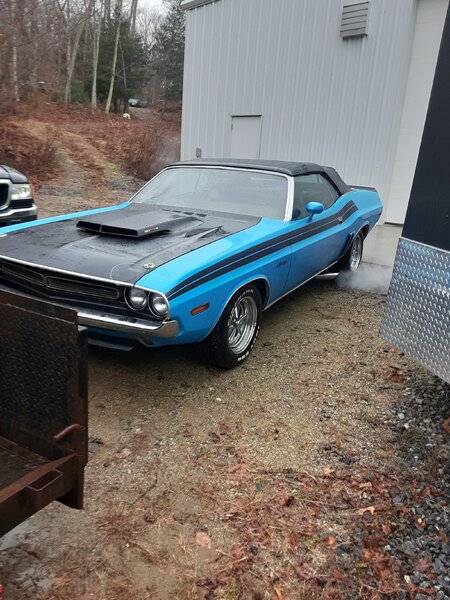 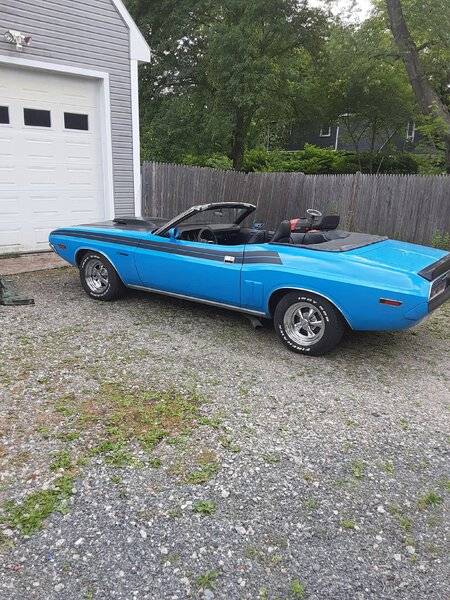 I am going to the machine shop today, and I am bringing the New Edelbrock Hemi cylinder heads, head gaskets and head bolt kit with me! I am going to try to nudge him by bringing him the parts,since he was preparing my block the last time I was there! I will let you guys know how it goes! I know that a man shouldn't want to be alone with his car parts,but a brand new set of Edelbrock aluminum Hemi heads are pretty arousing! Lol!

Well,it looks like I got all excited for nothing,because my block is sitting right where it was two weeks ago! No new progress! Hopefully dropping off the heads will get things moving!
You must log in or register to reply here.

FOR SALE Pro-Touring ‘64 Fury For Sale

Sidewinder vs Stealth vs E-Street/RPM heads.
2