So this is related to the air cleaner couple of threads. The Holley has to go. I can get an AVS 750 with electric choke, which was recommended by one reader.
Jegs has them in stock for $459. There are multiple "competition AFB 625cfm" on eBay, they supposedly have a 5 7/8 air horn also. Also they are way cheaper, about $150. Any one have experience with the "competition AFB"? Seems a bit small for my 440, which was rebuilt basically stock except for the aluminum manifold. And holy ****, redubbed dual 67 dual snorkel air cleaners are a bit over a grand, ouch. Going to stay with the no snorkle. Yes, it's not correct, but neither is the aluminum intake, and I like the dual snorkel look. Comments on the AFB carb? 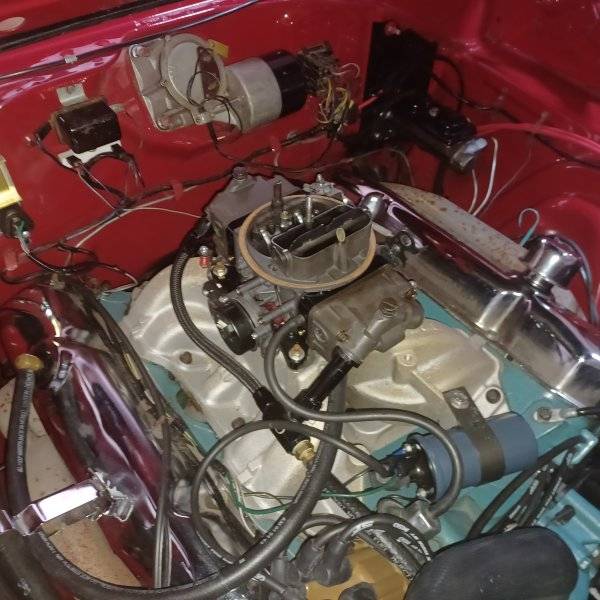 Get a 750 or 800 AVS and all is well. 650 is too small.
I like the AVS because of the easy adjustment on the secondary air door. AFB you are taking it apart and adding or subtracting weight, not fun or quick.

I would have dumped that Holley yesterday.
Last edited: Jul 20, 2022

I had an 800 Edelbrock AFB on mine that I spent some time on tuning it. It ran good and I managed to hook it up to the factory divorced choke. But I think it’s basic design was geared towards a rich mixture. I found an original 750 AFB for my 67 GTX and had it restored with stock primary jetting/rods and very slightly richer secondary jets. It seems to be just a bit more responsive than the bigger Edelbrock - maybe less rich on the idle circuit. So I would suggest the 750 AVS Edelbrock over the 800.

Another option might be to search for an original Carter 750 AFB or slightly later 750 AVS, and seek opinions as to if the Edelbrock electric choke can be adopted to it. If so have it rebuilt or restored as needed.

I’m an Edelbrock fan myself, I like the ease of tuning, and you don’t have to spill gas everywhere to do it. The AVS2 would be my vote, mine hasn’t shown up from back order purgatory, but it’s a highly recommended carb.

An Edelbrock is really a Carter.

Don Frelier said:
An Edelbrock is really a Carter.
Click to expand...

I’d say Edelbrock is like if Carter stayed in business, and improved their designs

If you're switching back to a stock cast intake and choke I would have the original restored. Keeping the aluminum intake? Get a 750 AVS or AVS2. Stay away from the Competition Series. They are set up richer and designed for racing.

Member nitrohemi had a 4327s for sale recently for good price. I ground all the "Edelbrock" stuff off my aluminium intake and painted it engine colour. Casual observer is none the wiser. Yeah, get rid of the Holley. I run Edelbrock 750 cfm. with electric coke on both my 440's. I think I went up one jet size in the secondaries.

The Eddy AVS2 I have is great - and not too hard to make it look mostly like an original Carter AVS.
Fits 5 1/8" air cleaner base, just like a Holley or stock AVS.
The Eddy fuel inlet is a hose barb, but proper threaded fittings are on Ebay.
Mechanical choke models are hard to adapt to the Mopar choke stove.
I bought the tuning kit too, and ended up using leaner rods on mine; it's a good deal, way more parts than you'll need, but very convenient.
G

A bit of fact keeping.
- Edel does not make a 750 AVS, in 750's they only make the AFB.
- Edel is not a Carter, there are design differences. Most noticeable is the differences in the AVS series. Edel added venturiis to the secondaries in their AVS which in my opinion was a good move.
- the primary nozzle design is also different in the Edel.
- different float setting
- Edel also eliminated the inlet valve on the acc pump.
- later Edel AVS carbs had annular pri boosters, which Carter never had.

For a mild perf 440, I would use a 750 AFB, Edel or Carter. If the engine has a 'cam' with a slant towards performance, I would use the Edel 800 AVS2 with annular boosters. But really little to choose between them.

Thanks everyone. I think I will go with a 750 AVS2 with electric choke. The air cleaner will fit, and although the top has a breather nub like a 68, only the purist will know the difference. I really like the no snorkel look with the aluminum intake.
G

The 800cfm will work nicely for your build. 800 is the max it’ll flow, it doesn’t mean it’s flowing that all the time, you can lean it out a little if you need to. Also with it being a vacuum secondary it’s only going to use what the engine demands. And if it’s too much or too little, you can adjust when the secondary door opens.

Yes, the 750 AFB Performer with electric choke. Got one just recently from an estate sale for very little money, new in the box.
You must log in or register to reply here.

Some carb and air cleaner mystery solved, kind of