The STRANGEST thing you ever found inside a used car??

When buying a used car what is the strangest thing you found inside, or included with the car?

I have a few, but will start with the STRANGEST.

When I got the 66 back to the shop, first thing I did was wash it, then moved on to vacuuming the inside.
Under the driver seat I spotted something, it was dark, so I reached under and pulled out a zip lock bag containing pictures and tossed them on the hood, to continue cleaning.
Now this was 2002, so these were the standard (4X6???) size pictures that you paid to have developed, like from a photo hut, I am sure most of you remember having photos developed.
As soon as the shop lights hit the the stack (75+ photos) I shouted for my father to come over.
As I opened the bag, And we began to go threw the photos, every one was of a beautiful naked or bikini clad woman.
They were in different poses , and there were about 5-6 different women, and they appeared to be taken on different occasions.
Toward the end of the stack, we found a few with two or three of the women playfully "posing with each other" if you get my drift.
Then there was 5 or 6 that included a goofy looking guy with a HUGE grin on his face, posing in between the girls.
The last 4 or 5 photos were polaroid's and the girl in the polaroid photos looked to be WAY UNDER AGE, she was fully clothed, but still in suggestive poses, and the last one she was with the same guy, these photos looked to be taken in front of a hotel.

The background of most of these photos looked to be a fancy house, some taken in an indoor pool area with glass sky lights and trees in planters.
A few had the girls on a bed,(again an expensive looking bed, with Ralph Lauren sheets and throw pillows.

We had a good laugh, and oogoled over the beautiful woman, for a bit.
And we even had some fun leaving some of the photos under co-workers windshield wipers with something like, "hey was looking to get in touch with you, been a while, and I am all grown up now, would like to get together" written on the back.
We had a few guys going nuts,!!!!, " Did you see her ?what did she say?
If she comes back give her my cell number" LOL!!!

So when I went back to pick up the parts car, I asked the guy who I bought the cars from(NOT the same guy in photos) "Hey, did you leave anything in that car, I bought?'
"Nope" he said.
"You aren't missing some pictures?" I said, some special photos?
He didn't miss a beat, and said no, and looked at me like I was crazy.
I went on to explain what I had found, and he claims to have never seen those pictures, and acted as if I was making it up.

I still have some of them, packed away, somewhere, I am sure I could post a few of the ones where they have bikinis on.
I always wondered, where they came from, why they were there, and the reason they were taken.

Did a wealthy man pay some high class strippers for a photo session?
Was he a professional photographer and these were test shots?
I have knot a clue, but it was the strangest thing I ever found in a used car.

I cant wait to hear stories of what some other members have found in used cars!!!!

Here is a few of them, I have covered the girls naughty parts, as I dont want trouble with the moderators.
Plus by now these girls are someone's mom, and that would suck to see topless pic of your mom on a car forum!!
Over the years, co workers nabbed some, some were in my fathers tool box, and when he passed all his belongings and tools vanished 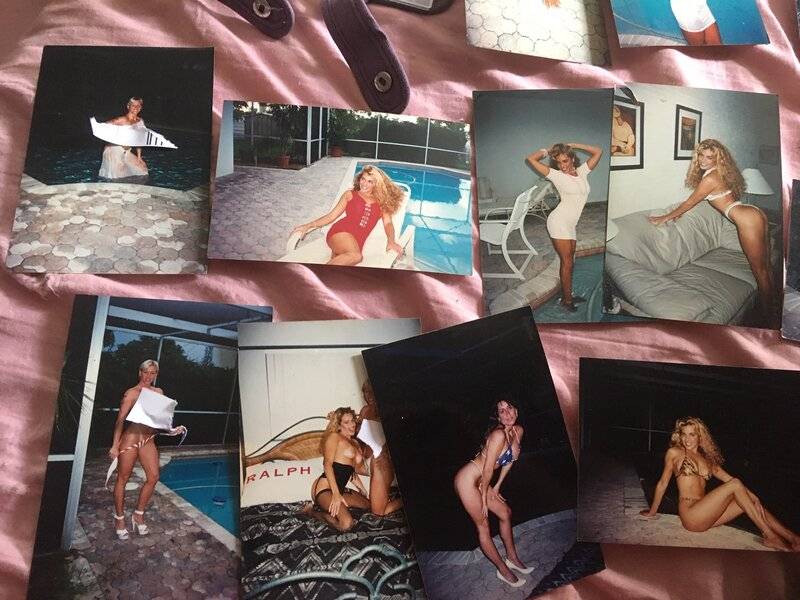 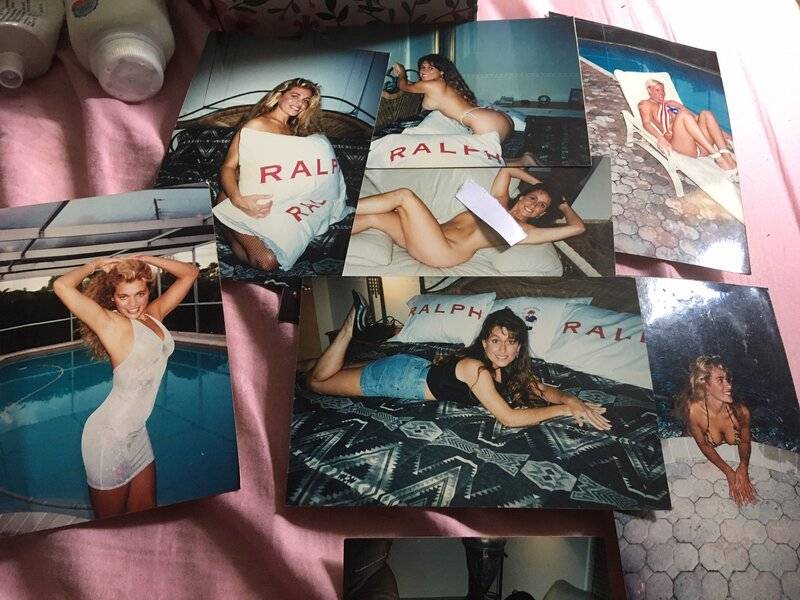 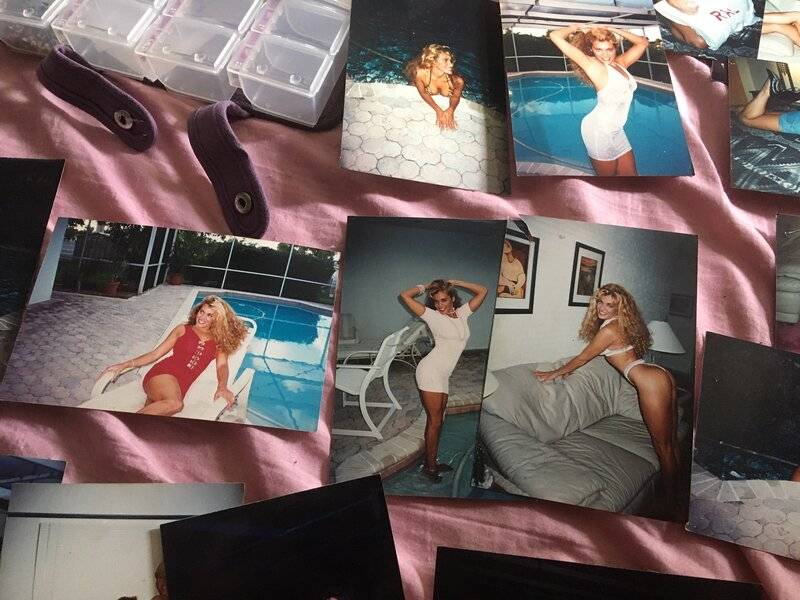 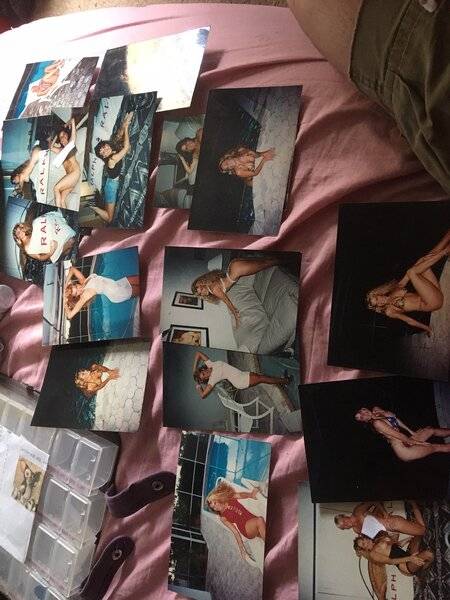 had a truck come into a dealership as a roll over to repair had to tare it apart and there was a hole bunch of photo of this guys wife nude and they were having sex also we put them in a envelope and laid them on the seat when we were done with the job ,he wasn't happy but all she did was smile at us

I am joking no photo needed!!!!

No I have a mirror. 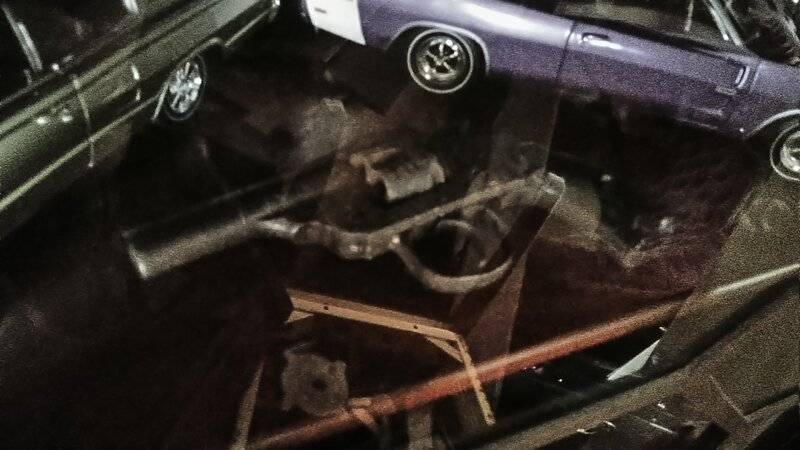 I found this one in one of my 47 Buicks I bought it's in poor shape can't even open cly . I was debating about giving it a little bath in something but it's not really worth alot so it just hangs around

I found a pair of frilly panties (like a size 2-4) in one of my RR's
stuffed under the rear seat base, in a corner
I think it was his (org. owner) daughters,
she was a teenager when he had the car
they were way too small, to be his wife's

he was an old long white haired, in a ponytail
& almost bald, ol' carpenter, not a real looker,
ol' dirty hippie type
(old 60's throw back dude, trying to still live out his youth at 80+, sad really)
but who knows, I didn't care or ask

the daughter was a lot thinner, didn't look like either parents
still a looker at 60+

Not a used car story - but an ex-colleague of mine worked for the local Company that outfits Police cars here in NZ. One day a patrol car came in for repairs to various items. The cars are supposed to be emptied of all Police equipment. Well this one wasn't, and the guys doing the work found a stack of guns, rifles, and Tazers, body armour etc. Needless to say they rang the Police station that dropped the car off to them....after a mandatory 'play session' with all the weapons - posing in pictures etc
Was pretty funny until their boss found out about it.

All I ever found for cool stuff was literally thousands of pot seeds in the carpet of a ‘71 Bee. This was around ‘76-‘77.
My buddy used to work for the police when he was a teen cleaning their vehicles on the weekend. He found drugs almost every time stuffed down inside the rear seats. I guess the cops would frisk guys and miss stuff. Once in the back the guys would hide the stuff between the seat back and bottom. My buddy wasn’t a drug guy so he always turned it in. But he found stuff literally every weekend.
My current ‘70 Coronet project had one plain shot of a guys girlfriend, but she was neither pretty or ugly enough to be interesting.

An acquaintance of mine bought a small Ford in Arizona. When he got to the border, our Customs agents wanted to know if he had anything to declare, he said just the car. They checked the car out and wanted to know why he had a pistol under the passengers seat. He did convince them that he new nothing About it.
We bought the Charger I am working on from a woman in Calgary in 2004. In 2006 I was doing very thorough cleaning of the car before heading to a Charger Meet in Jefferson Missouri. Found that both outside rear passenger ashtrays had joints in them. Almost panicked, because a few months before, a fellow heading for US was charged for trying to transport drugs into the Country. They also confiscated his car. I called a Canadian Border Services for advice to see if we should cancel our trip, he told me clean them well and not to worry. We had a good trip.

A rental truck turn-in had a sawed-off shotgun in between the front seats. Deputies came pretty quick when we called from the shop. I told the guy that found it to not touch that thing at all!!

This is not nearly as cool but it was funny.

In 1997/1998 I Bought a 1977 Dodge truck, with a 440, I pulled the 440 for my 1974 Charger.
I then bought a 1976 Dodge van with a 360, to put in the truck, because a friend wanted the truck.
I paid $60 or $80 for the van, guy drove it to my house removed the plates, and left.
The van was PACKED full of empty Molsen ice bottles, 12 or 18 pack, I dont remember, but they were put back in the box they came in, neatly stacked in the van.
For the next 3 weeks ever time we went food shopping, we just loaded up our car with the boxs of bottles and returned them, and it always managed to pay for our food!!!
I think there was $65-70 in returns in the van.
I always wondered why he didnt return the bottles before he sold the van, the store was right across the street from my house, he would have doubled his money!!!!
Its not they were tossed all over, they were neatly put back in the boxs and stacked ceiling to floor.

I haven't a clue why he would not have looked through the trunk?

Read a while back the number one sought after job was a car cleaner for any major car rental company in Colorado. They were of the first to "legalize" cannabis. Seems many renters could not carry their "leftovers" back home and just left it in the car.....awesome job benefit package....
You must log in or register to reply here.

Who was the member that had a ton of old Mopar pics?

Crazy dudes you used to know.
2

Halloween is coming, do you have any good ghostly experiences?
2

Can anyone tell me about the Olympian that was attacked?