Anyone have a just-turned 3 year old (kid or grandkid)?

My grandson just turned 3 years old last week. Still waiting for him to speak. I have not even heard him say mom or dad yet. How does this compare to other kids (I'm concerned at this point, but hesitate to bring the subject up to the parents). He goes to a "day-care" five days a week, where there are a half a dozen other kids. Thank you.
Last edited: Jul 6, 2022

Usually by 2 kids are chatting. Both my kids were chatty, but my son wasn’t as much as my daughter. Turned out he’s Autistic. Does your grandson like things that spin such as propellers or Hotwheels wheels??
Last edited: Jul 6, 2022

That's all he does all day, taking these little mini-car models (the size of hot wheels) and move them around the floor, table, walls, and elsewhere. Or just run around aimlessly with one or two of the cars in his hand(s).

My granddaughter just turned 3 last month. She's not overly chatty, but has been talking since she was around 2. New or unfamiliar words she repeats like she's storing them away in memory. Every time she is over at our house it's "Grandpa, let's go see the race cars".
I had a friend whose 4 year old barely spoke and they tested him for any hearing issues, none found. Turns out that mom, who was home with him all day, never interacted with him. Mom had her own issues, long story short, they divorced, my buddy got custody and his son started to catch up developmentally to kids his age.

My first child was well into 2 y.o. before she said much beyond mamama, dadadada. She's now a straight A student. My 7th just turned 3, can count to 5, , knows the numbers up to 11, recite the alphabet, knows his colors (20+), shapes to include hexagon, oval, etc, and knows his right from left. He knows engine parts by name, components of tractors, etc. he absorbe stuff like a sponge. Kiddo #4 is going into 2nd and can still barely read and constantly draws letters/numbers backwards. They are all very different. If he isn't speaking by 3, I would definitely be starting the conversations with the parents about getting him looked at. I am not an over-diagnoser by a long-shot, but there are things that can be addressed to get them up to speed with a little early intervention.

Have a grandson he’s about 2 1/2 and is not talking. Doctor wants to get him in speech therapy. I think it’s because parents don’t interact with him enough.

joe m said:
Have a grandson he’s about 2 1/2 and is not talking. Doctor wants to get him in speech therapy. I think it’s because parents don’t interact with him enough.
Click to expand...

Interaction has everything to do with it. 1st vs. 7th kid. They get immersed in it and it just happens earlier.

67Charger said:
Interaction has everything to do with it. 1st vs. 7th kid. They get immersed in it and it just happens earlier.
Click to expand...

When he’s here wife and I give him all our attention and he loves it. When my son comes to get him he doesn’t want to leave 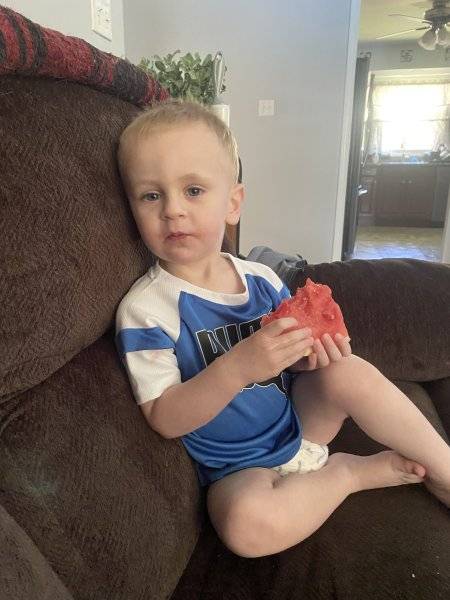 Granddaughter is 3. She seems pretty chatty. Hard to understand some things. Others not so much.
M

Who is doing his talking for him? #1 daughter was a chatter box. #2 daughter did not talk till grade school just because she did not need to. #3,4&5 sons were talking before 2.
#2 is now in her 40's has a masters and will not shut up at times. 1-5 are only 6 years apart.

My grand daughter is 3 1/2. Never said a word till about 2 1/2. She would point to things but never say a word till I said if u want something u have to ask for it. That was on her third birthday. It’s kinda strange as the older grand daughter the parents always had story time for her but never really got in to reading books to the younger one. Now she is pretty good with her words. Still not where she should be but getting there. Kim

Like the other guys said, interaction is the key. My 4 year old girl started talking around 2. Take the time to read books to him whenever possible and talk about it. Not just TV or digital media. Hearing could also be a problem, as stated. I would also consult a speech therapist, if possible.
M

Take the 3 year old’s phone away. Or communicate by texting to them.

I have a good friend whose oldest son was slow to talk and when he finally did, he had slurred speech and talked very little for many years. He was later diagnosed as mildly autistic. Not saying that's what your grandchild has & it's too early to tell, but it's something to look for.
S

There are a few good ideas on this website 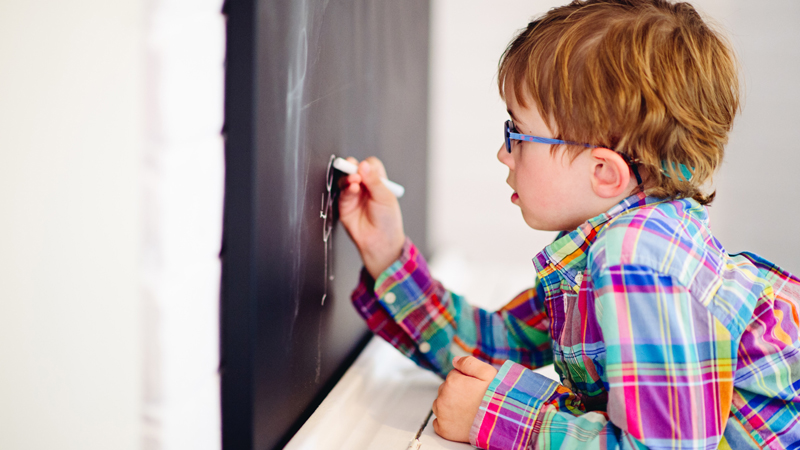 Encouraging Communication in Children Who Are Nonverbal

If you are trying to communicate with a child who is nonverbal, talk with your care provider to see if they have suggestions you haven’t tried yet.

A coworker's son recently turned 5. I don't see the young fellow very often but when he would visit I'd get quietly concerned that he was not speaking more or interacting more with others. Last year or two I began to think I should discuss the issue with my friend (15 years my junior) but didn't quite know how to approach the situation without offending him. His boy seemed overly introverted and shy. Lack of self-confidence .... but he is only 5, I told myself.
They recently started speech therapy for him. I don't know how many sessions so far, not many, but the last time he visited the shop the little guy was brimming with personality and chatting away like I've never heard him before! My heart swelled for him and his parents.
Good luck, God bless!

My friends grandson didn't start talking till 3. Now you can't shut him up.

most all I know all started before 2
the 2 boys were early talkers, chatty
& as young as 1-ish to 18 months, mostly gibberish, baby noises
a few words you could make out clearly
'Keef for' Keith is the oldest
(my older sister's son, she was in the USAF, I raised her kids)
James, my boy followed him like a lost puppy, 4+ years younger

Sabrina is the oldest (my older sister's girl) was 'beaner'
or sounded like it...

one of my twins Rachel didn't talk much, IIRC about 3-4-ish
she didn't ever really talk a lot before or after
not like all the rest, you couldn't/can't shut them up

We figured she's just a shy, quieter type of introvert
different personality, she couldn't tell US what's wrong
or we didn't understand her maybe
she was always with the other twin Rebecca, that's a constant jibberjabberer
(sort of their own language, a twins thing)

I & Lisa/We just figured sort of opposites
we sort of thought she was ignoring everyone,
it was loud often, or she's just not that talkative,
she liked to be alone, read a lot & watch TV
or not an extrovert, like all the rest were

Lots of kids around talking constantly by her or for her
she could read really young, all the older kids' books
her speech was just fine, sort of loud-ish,
she had to be, just to be heard
just rarely talked or just not as much as the rest

Come to find out she had a (earwax) wax plug in her 1 ear
the other one she had an ear infection,
the org. reason why we brought her in
when we found out, about the other ear being plugged
when the Dr. looked deep down in it
you couldn't see it from the outside, looking down in 'at all'


A constant cough is what started us to wonder, what's up ?
a professional ear nose throat specialist (at Kaiser of all places)
cured it all, one ear was a simple flush (we cleaned them often too)
just not deep enough or thorough enough it seems,
none of the other kids had any issue/s...
We had been in there several times before for other stuff
with any or all the kids (kids being kids)
none of the other dr.s said shit or did shit

Dr. used one of them squishy rubber hollow balls, with a tube on it
& hydrogen peroxide wash, he sucked & flushed it all out
the specialist is the only one that noticed anything
other than me & Lisa
Antibiotics cured the rest

Rachel is still the quiet type 'to this day', her ears/hearing are fine
her speech is fine, she's smart as a whip, 140+ IQ,
has a master's degree in engineering, she loves 4X4s, sports cars
& married a car guy, all my girls did...
Jessica is loud as fuck now, talks over people
being the youngest & littlest, softest voice when she was a lil' kid
& having to stand up for herself, may have something to do with that
some are just more quiet than others 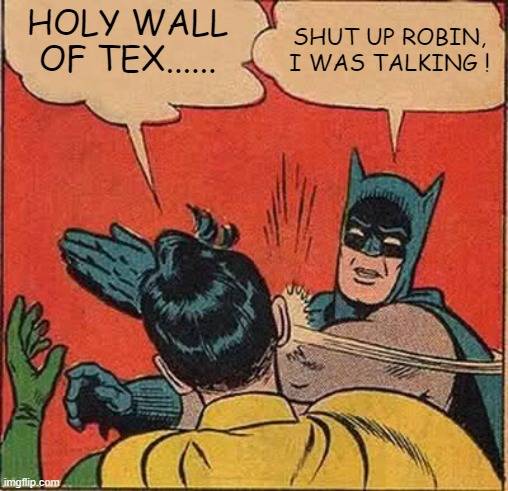 Women that you dated and the red flags that you DIDN'T spot until after the fact! The saga of the 15 year old!
2

What to bring to a car show?