I never thought I’d say this, I’m looking for some Chevies!

I’ve been involved with the Muscle Cars and Corvette Nationals (MCACN) since almost the beginning.
After buying my Magnum last year I mentioned to Bob Ashton that it might be cool to do a “Malaise Era Muscle” invitational display at the show. He agreed and said if I could line up some cars we’d do it!
I made up some flyers before last years show and at the show talked to some representatives of various make clubs and several friends there like Diego Rosenberg and Ryan Brutt.
By the beginning of the year I already had a half dozen cars lined up!
I got an updated list this week of cars registered so far and there’s nearly two dozen! I was going over the list and most makes are pretty well represented, including 8 Mopars, 3 or 4 Olds, 4 or 5 Pontiacs, 3 or 4 Fomoco, a couple Buicks.
But not a single Chevy!?
If anybody knows anyone with a nice stock malaise era (73-mid 80s) Chevrolet please send them our way!!!
I‘d be interested in cars like a Cosworth Vega, Monza Spyder or Mirage, Laguna S3, Citation X11 as some example.
I‘ve gotten slapped before for putting contact info here, so PM me, or Bobs email is in the MCACN website, or they can even submit an application for their car, put “Malaise Era per BradS” in the “club” line of the application.
Invitational Displays | mcacn
The show is going to be really interesting this year, the main feature when you enter the hall will be wing cars!
67 and 72 model year features, a Mr Norms feature and much more. It’s always an overwhelming variety of the top examples of all different muscle cars.

Just as a little side note. I know people will laugh at the Citation but, there is guys out there that have swapped them to 4.9L Cadillac V8s and also the dreaded Northstar V8s as well and they are fairly fast. I think there is a couple with a Supercharged 3800 in them as well. I always did like the Laguna S3s for a GM product from the 70s.

An X11 I saw last summer was actually one of the inspirations for the idea of this feature.
I was at a local cruise and a black X11 pulled in. I was taking a couple pictures of it as he backed in a spot, and overheard him say to a friend as he got out of the car, “you might laugh, but when was the last time you saw one?”
I thought to myself he’s right, I can’t remember the last time I saw one. Sadly I’ve never seen him since, as I’d love to invite that car to be in the display. If anyone knows the owner of the black Citation that was at the Rolling Meadows cruise in late July 2021 please get me his contact info!
Then when I got the Magnum GT the next month, I thought about how despite going to dozens of shows and cruises every year, I’d only seen a couple GTs.
That got me thinking about how many cars from that era that have all but vanished, and the idea of a display of these cars was born.

They're nice cars not that far removed (sometimes even with nearly identical bodies or underpinnings) from early 70's cars, they feel the same or nearly the same and they have plenty of power with 350-450-ish V8 engines.

I think it's a great idea. I wish my '73 Pontiac Grand Am was done.

I like some GM stuff. But I worked an auto scrapyard back in the late 80’s... and loved loading the crusher with Citations, and other X cars.

x-11 notchback was the only gm x based car I'd ever even consider being seen in.

The 4 door slopebacks were absolutely hideous.

Ever try changing the rear spark plugs in a v6 model?

SteveSS said:
I think it's a great idea. I wish my '73 Pontiac Grand Am was done.
Click to expand...

We have a 73 grand Am and a 73 Lemans Sports Coupe lined up, I can’t wait to see them!
Bob knows a high end muscle car collector from the southwest who spent 6 figures doing a rotisserie restoration on a 77 Can Am. He had one in high school and that inspired this project. He was really thrilled when he heard about the display as he now has a venue to showcase it.
Pontiacs are going to be well represented in the display, now if I can find some Chevrolets….

440 PHIXX said:
I like some GM stuff. But I worked an auto scrapyard back in the late 80’s... and loved loading the crusher with Citations, and other X cars.
Click to expand...

I've been to many yards over the years looking for Mopar stuff and one guy threatened me with a blast from his shot gun after what I said to him when he said the first thing he did was crush any Mopar that came into his yard. Basically, I called him a moron but in some other choice words He wasn't the only one that said they crushed them right away but he was a 500 lb ahole sitting at a desk in the middle of a half way dark building full of crap and his desk was piled high with more crap. Hard to believe some are so willing to forgo profit vs being an ahole.

Off subject a bit, but speaking of Chebbies, this is on BAT, whch I think is pretty cool. 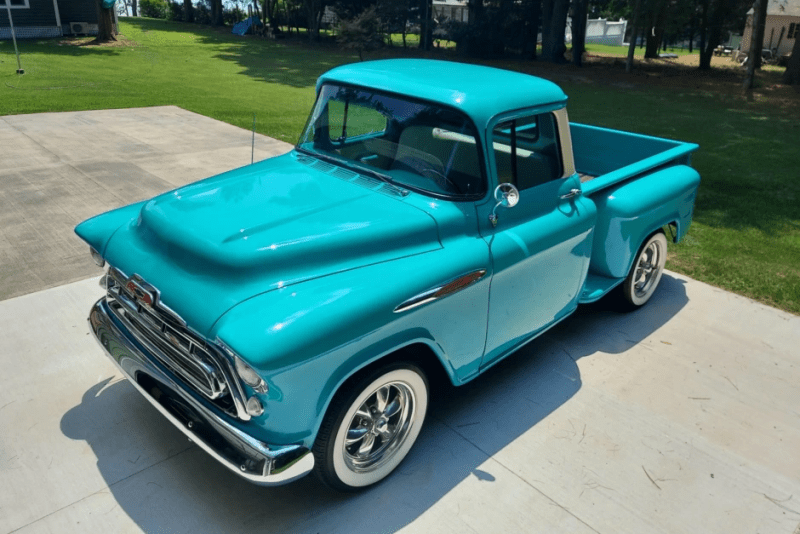 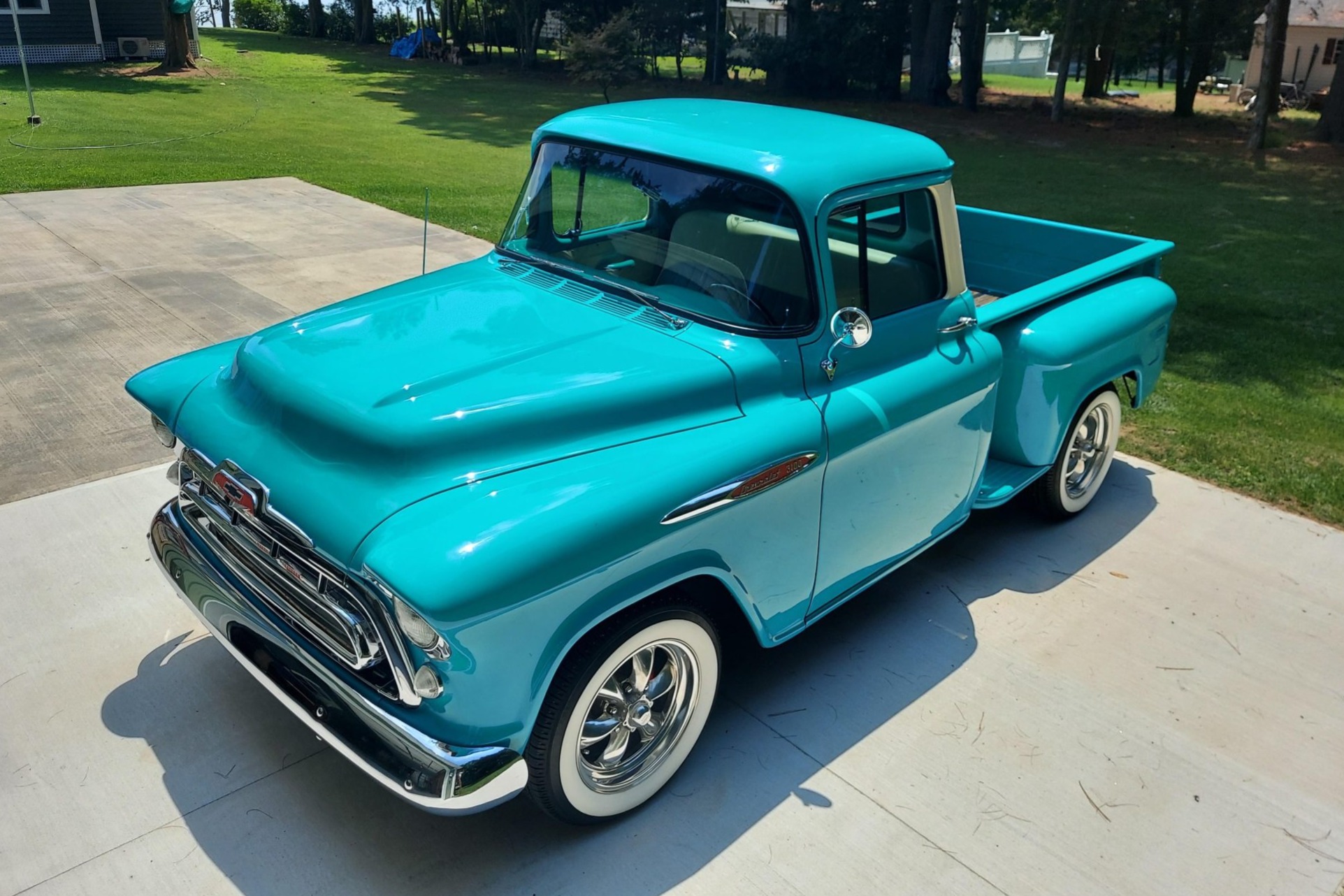 Bid for the chance to own a 1957 Chevrolet 3100 Pickup at auction with Bring a Trailer, the home of the best vintage and classic cars online. Lot #82,027.

They're nice cars not that far removed (sometimes even with nearly identical bodies or underpinnings) from early 70's cars, they feel the same or nearly the same and they have plenty of power with 350-450-ish V8 engines.

Also for a lot of them, this is the beginning of the sway bar era, not to mention disk brakes and electronic ignition being standard, but before "un-tune-able" or electronic carburetors.

Richard Cranium said:
Off subject a bit, but speaking of Chebbies, this is on BAT, whch I think is pretty cool.

Bid for the chance to own a 1957 Chevrolet 3100 Pickup at auction with Bring a Trailer, the home of the best vintage and classic cars online. Lot #82,027.

I like trucks but I'm not into modern day wheels especially with wide whites on the old stuff. Pickups back then were mostly farm units and you rarely saw one in town and when you did, it didn't have custom wheels with wide whites lol
You must log in or register to reply here.

For our younger members, can you explain a bit about your interst in the muscle car era?
2

Looking for a ‘75 Roadrunner for a MCACN feature display
2