Soldering vapor return onto a factory sender - how to avoid melting isolator?

You can remove the insulator and replace it after you solder the return port, with a modified bolt and seal it with some JB- Weld? I did this when I added a extra circuit for my low fuel warning light that I added. 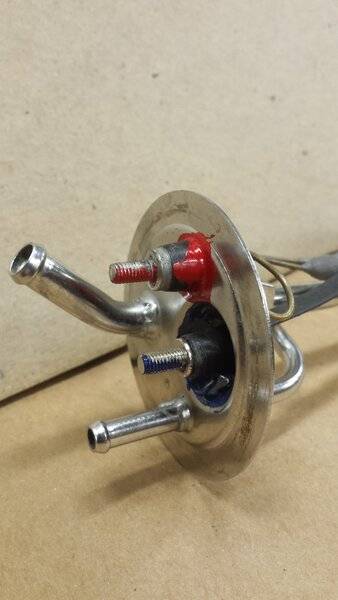 Mercy, there must be a dozen threads on here about return lines on our cars....
and yes, I've found the easiest way to search FBBO is actually to go to the google website and
search from there, as the search box on here is famously wonky as hell.

Tony Tee said:
You can remove the insulator and replace it after you solder the return port, with a modified bolt and seal it with some JB- Weld? I did this when I added a extra circuit for my low fuel warning light that I added. View attachment 1162885
Click to expand...

I thought about JB Weld, but it doesn't give me that much peace of mind on such a critical joint, particularly as I've found that - in my experience - it doesn't bite all that well on surfaces that vibrate (case in point, that Zamac 1:18 Road Runner in the back of my pics that I'm converting into a more-door model, using PC7 and JB Weld - have had quite a few joints fail in the process).

But if it's worked for you, all the power to you.

Wish there was a fuel-proof bulkhead fitting for this, or a plastic rivet-on replacement like the original available.


moparedtn said:
Mercy, there must be a dozen threads on here about return lines on our cars....
and yes, I've found the easiest way to search FBBO is actually to go to the google website and
search from there, as the search box on here is famously wonky as hell.
Click to expand...

Well, I've been using my Google-Fu like a madman over the last few days. Since then, I've yet to find a thread that discusses, specifically, whether the return line for the Wix filter should be submerged or not, or any absolute clarity whether it returns fuel or vapor.

I also failed to find a thread that discussed soldering near an insulator, specifically on a sender. The one thread that had the most detail (an EFI conversion from 2009 on an AMX on the AMC forum) still didn't discuss the soldering techniques used. Given that this is my only OEM sender, and I have all of this long weekend to get it done, I had to be sure I didn't pfluck it up.

Maybe I missed these details somewhere, but I wouldn't have started this thread if I didn't think I needed help and clarification that I'd failed to find in the previous threads.

P.S.: I've found the Wix threads everywhere too, and while the return line is discussed, it's not often that the thread delves into how the return was connected at the tank.

P.P.S.: I did run into the far-too-difficult-to-find-on-Google-but-absolutely-essential-read thread at the a12mopar.com forum about the internal production issues with the reproduction 440 vapor separators though, and was glad to read through it.

cudak888 said:
I think the Wix isn't metered, as opposed to the original 440 type which has the .060" metered orifice. Seems to work well for many though, including a fair number of forum members.

Well, I took the plunge and did it already, and - sure enough - the 150W iron was only hot enough to get the solder onto the surface, but following that up with a small butane torch did the trick. I wound up using a socket as a heat shield and heatsink, and it worked perfectly.

Now, if it's not clear in the photos, I did wind up tilting the tube up, for better or worse. I was going off of some original 440 senders and it appears as if they were designed to dump above the fuel level, so I imitated that. Probably because they were metered.

I went ahead and started soldering before anyone had posted whether to point it down or up, so apologies to those who have suggested otherwise.

However, there's nothing stopping me from flaring the end for a fitting and connecting an inverted J-bend back down with an extension. Come to think of it, it may be the only way to do it and still get the sender to slide into the tank.

Makes sense. Seems to work pretty well for many on the forums though, and there's one or two videos on YouTube praising it. Doesn't necessarily mean it works for all situations, but I don't mind giving it a shot.

FYI, the vapor lock wasn't the primary issue - I'm installing an electric fuel pump at the moment - but I decided to add it into the mix as it'd be an opportune time to drop the tank.

Duly noted - see my reply to 70chall440 about my error in pointing it up.

Congrats, good work. If you decide you want/need a bead in the end of that return line here's a tip, get some solid core wire (like for a house), cut off a piece and make a loop that fits over the line with the ends as close as possible, then solder that wire onto the tube and you have yourself a bead.

Thanks for this, Frank. Completely forgot about following up with Wix.

-Kurt
You must log in or register to reply here.

OK, where does this go?