Geoff 2 said:
Nooooooooooooo, the Comp red stuff does not drip off. Read post #16. I was waiting for parts for a HFT engine I had built. Cam installed with lifters, left for weeks while waiting on other stuff. Upon removing a couple of lifters, the red lube was still in place. And that is exactly where you want it when the engine is fired up.

Out of all the cam companies comp has about the worst reputation with their flat tappets.

For what it's worth, I installed my Comp cam several years ago. I slathered the cam with the lube they provided. Changed the oil (Rotella & a bottle of ZDDP Plus). Didn't change the oil till the next year. No problems.

2quick said:
I'm Installing a Comp Cams flat tappet cam in my (Not a Mopar) Gen V 454 marine motor, nothing super fancy about 450Hp. I've rebuilt and assembled the short block using Redline assembly lube and have an entire bottle left. In the past I've only used moly lube to break in a flat tappet cam, but I don't have any! Can I use the Redline assembly lube on the cam? Seems kinda thin but the stuff Comp supplies is in a bottle also. Not sure if Comp even uses Moly anymore. What you guys think?
Click to expand...

Depending on where you read it, there are one or two FT companies left making FTs. I hear the name Johnson & Hylift Johnson.
The cam companies do not make their own FT lifters, nor springs, nor p'rods.

Cam or lifters, it's a bit like the chicken or the egg...who came first?
IF there is a mechanical failure it could be the lifters are at fault due to incorrect machining tolerances or surface finish.
But it could be the cam at fault as well if it is not in specification.
If you find lifters which are stuck and cannot rotate it is easy, then again.... they could have spun freely in the bore but due to poor machining the force provided to rotate was not sufficient while running.
Many options of failure, but only for those that fail due to a mechanical issue.

Back in the days, people bought new cams and lifter and installed them, break-in, and run them with barely any failures.
Nowdays there are soo many failed cams/lifters being reported, and at this time machining tolerances being better/precise and metal qualities being better you would expect the opposite.
The thing we fiddle too much is the oils and additives, specially synthetic oils who are not up to the job due to viscosity and/or film strength, adding magic bottles which supposed to improve protection.
Bear in mind, adding a Zinc additive does not mean it provides protection instantly, it will adhere to the metal surfaces over time and only then will provide protection when metal to metal contact occurs. This is not happening in those first 20 minutes of break in. (it is there to prolong the oil life, as oil is used the viscosity degrades and looses film strength)
The right oil that provides good film strength will protect better as its ability to maintain an oil film between these parts that are pressed together is good and therefore avoid contact at all times.
(Running stronger valve springs with big cams increases the force applied and require a higher film strength)
That's where the moly paste comes into play, this is there only for the time the engine cranks and fires up and no oil flow is present yet but will follow soon after (therefore priming is a must to shorten this time)
There are many reputable engine builders who use Comp cams as well and have no issues with them.
They use old fashioned dino oils, remove the inner springs (if applicable) and run it for 20 minutes and never worry about it.
I think those guys are the best source for asking what to use, here are many guys who had success with certain mixtures of oils and additives, but it comes down the line that just a simple oil selection that provides the film strength needed to avoid excessive wear during this critical break in period is all it needs.
Which is the same thought as they did in the 60's and 70's with these engines.

Depending on where you read it, there are one or two FT companies left making FTs. I hear the name Johnson & Hylift Johnson.
The cam companies do not make their own FT lifters, nor springs, nor p'rods.
Click to expand...

I had a 440 built 2 1/2 years ago to go in my 71 road runner restoration project. after six months waiting for the car stuck in body shop hell I called my engine builder for suggestions on long term storage and we agreed to loosen the valve gear pull spark plugs shoot WD-40 in cylinders and reinstall plugs. Every six months I would shoot WD-40 in the cylinders and wait on my car to be completed. So 2 plus years pass and car is in the finale paint stage and I decided to inspect the 440 internals. I pulled the intake and one cylinder head and found the cylinders looked good no surface rust and a lot of waxy residue from the WD spray and the cam had no lube left on the lobes. I could wipe my finger on a lobe and it was dry. I installed and lubed this cam and used plenty of the comp cam lube. At this point I decided to prime the oiling system and recoat the cam. I'm sure the cam lube being a light viscosity oil just flowed away so I found some grease based lubes pulled the lifters and slathered it on the cam lobes and lifters. I used Isky rev-lube and am confident it will work on break in. 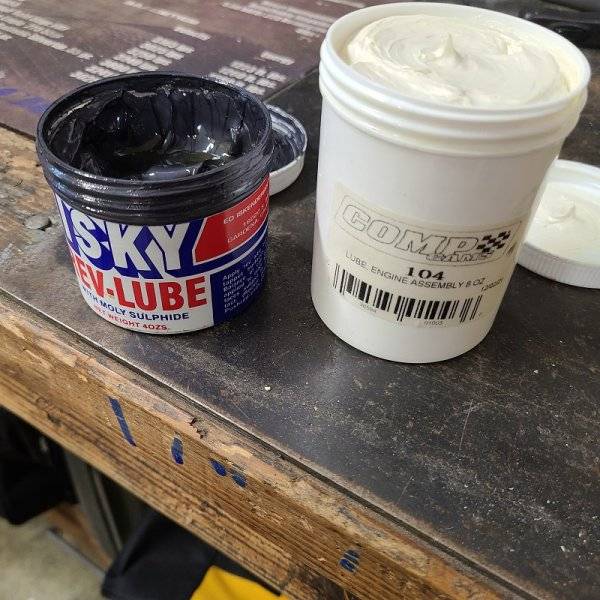 2quick said:
Most likely a month out...
Click to expand...

Ah, another Comp Cams bashing thread. Yes, Comp sells way more cams than anyone, so they may have more failures, but as a percentage, probably no worse than anyone else.

Yes, people are far more inclined to get online to complain about a failed product than they are to praise a product. It's ludicrous to think Comp would make a product to instantly fail so they could sell more cams.

That black moly lube is old tech and is good for plugging oil filters. The red cam/assembly lube that Comp, Permatex, and everyone else sells more than likely comes out of the same spigot from an outside vendor, just in different packaging.

With the aggressive ramps on some cams these days, it's no wonder people run into problems with FT cams and lifters. I'm sure a number of failures are self-inflicted by the customer as well.

Personally, I run HR cam and lifters in all of my hot rods-Mopar, GM and Ford. It's not worth the headache if a cam goes flat and a roller cam will always make more power, at the same duration, as a FT cam.
M

Wipeout, what caused this? Not mine. 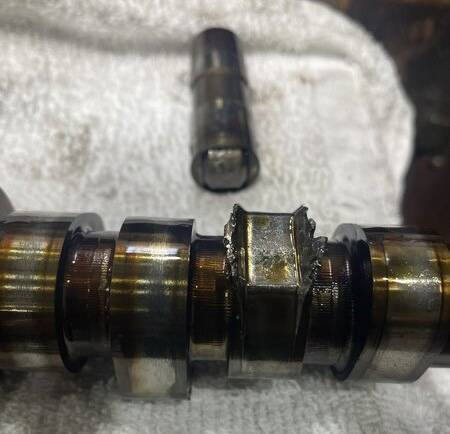 GTX,
Well said.
Some with their silly comments about CC need a reality check.
What has happened to simple common sense?
The cost of the supplied lubricant with new FT cams must be miniscule compared to the cost of material & labour to make the cam. The carboard box probably costs more than the lube.....
So it is illogical to think a change in product was made on cost saving/profit.
Which leaves one alternative....
The new product gives better protection against break in failure.....

I probably put more miles on a .630 lift comp flat tappet in a summer than most would do in several years. Don’t think I need the reality check…and I didn’t say the comp lube doesn’t work. I question comps QC on stuff, I’ve seen some garbage from them, period. If You compare a normal camshaft to their nitride pieces you can see they spend a lot more time on those to make them nice. You get what you pay for. They are a corporation at this point. All I originally stated was the driven assembly lube works well. That drove some off the rails because it doesn’t come in that quality comp box.. hell I’ve use luberaplate and even STP in a pinch without a failure in the past on dyno cam swaps. Use what comp tells you, I don’t really care. More than one way to skin a cat.
Last edited: Oct 11, 2022

Geoff 2 said:
So it is illogical to think a change in product was made on cost saving/profit.
Click to expand...

It might not apply on this case perhaps, but beware on how low some industries are willing to go to save money!
I personally think that the supplied lube CC provides is a proven product, as long as people read, understand and follow the recommendations on installation etc. it should be all good.
G

Question: How much sense would it make to save a few cents on something so cheap as a pouch of lubricant, but then have to pay warranty claims for failed cams because the lube failed?
Answer: It doesn't make sense.

And as for other brands that 'work well'. It is like the 'Which is the best oil thread'.
Unless there is some valid side by side testing, anecdotes from Bill's Uncle are meaningless.

Geoff 2 said:
Question: How much sense would it make to save a few cents on something so cheap as a pouch of lubricant, but then have to pay warranty claims for failed cams because the lube failed?
Answer: It doesn't make sense.
Click to expand...

That's why i said it might not apply on this case, just saying that in general there are so many industries that are willing to cut corners and go cheap.
It doesn't make sense, but it happens a lot.

CC wil have the phone ringing on a daily base with a customer with a failed cam, they do not need more phone calls like that and they will provide decent parts.
As i already stated, read/understand & follow the installation instructions and recommendations.
The wheel has already been invented, no need to do it again.

Well my last 2 FT cams were broken in with all the usual procedures and Driven break-in oil. They both still look great but then I have never had an issue in the past 30 years either. You really just have to stick to a proper procedure and your cam will be fine. Make sure your lifters rotate in the bores when you crank it over during lash setting procedures. Mark them with a Sharpie and make sure they ALL turn at least half a turn while cranking with a ratchet.
All the paste and thick liquid lubes will migrate into the pores of the cast core cam but they will wipe off during lash procedure.
Just pulled my Howards SFT yesterday and installed new Isky roller. The Howards flat cam still looked good with normal wear patterns on the taper.
I'm a strong believer in the EDM lifters as well.

Mopar Hunter said:
Wipeout, what caused this? Not mine.

Ouch! That tends to happen when the lifter turns in the bore from the tie-bar coming apart.
You must log in or register to reply here.