The only time this car really knocked was recently when the cam was failing. I've driven it in 110 heat and it didn't knock.
Here is where I start recalling some clues that something was going wrong and I didn't know it. Before the steering box installation, I now remember that it knocked a little when leaving from a stop sign. This actually happened a couple of times and the weather was in the 80s. Cylinder #4 had lobes going on both valves. #3 had an exhaust lobe that is almost gone entirely. All of that surely had some effect.

I think the slight drop in compression and quench is a good move. Added resiliency, reliability and piece of mind.

I bet the cam change you made had a much bigger effect on power than this compression drop will. 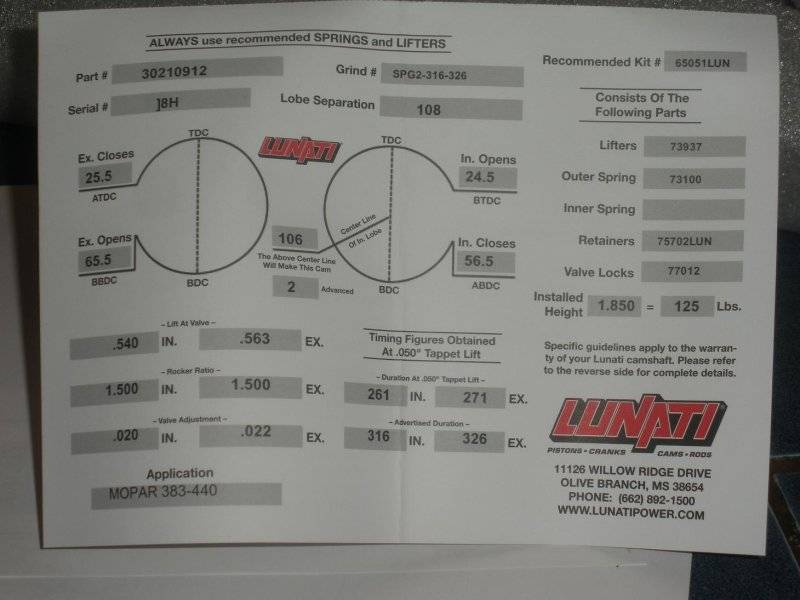 I wonder a bit about the legitimacy of the Mopar Performance specs. That is a really late intake closing they show on that chart.
Last edited: Jun 4, 2022

Everybody states that you can easily run 10.5:1 compression with aluminum heads. I am not a believer in that statement anymore. Todays gas just flat out sucks compared to what we used to have 40 years ago. Both my big blocks were there, and yes, it is possible on 91 octane. BUT, I had to slow the timing advance rate way down and drop total timing to 30-31 degrees. I have since had both motors redone dropping the compression down to 9.6 on one and 9.7 on the other. Now I can set my total timing where the motors make the most power on the dyno and lighten up the advance spring to bring total all in by 2100 rpm. No detonation ever now. I lost 12-15 hp on each engine by dropping 1 point of compression, but the motors feel much stronger because of being able to bring the timing in quicker. I will never build another street motor with compression over what I have now. Just not worth all the hassle imo.....

I'm wondering if the trani change had anything to do with the cam carnage? that motor was use to operating in a little different manner behind the automatic!

I've put on 2000 miles or more since the transmission swap but also switched to Redline oil and the Comp Cams oil supplement. I just recently learned that many times, these supplements can wreak havoc with the delicate balance of the oil and make it LESS likely to protect your engine. That was bad news to hear.

I wonder a bit about the legitimacy of the Mopar Performance specs. That is a really late intake closing they show on that chart.
Click to expand...

In the case of the two cams in question here, the MP vs the lunati..... you’re looking at specs from two different lift points.
The open/close points on the lunati are at .050 tappet lift, while the MP cam uses the mystery spec for their “advertised” duration.

Using the advertised duration for the lunati the intake closing point is 84abdc.

Not all the lobes of the MP cam are that clearly visible, but from what’s visible, it appears the wear pattern doesn’t look as uniformly rearward, as seen on the lunati cam.

Kern looking at the spark plugs, one bank white other black and oily. Wonder if the intake manifold was slightly cocked? Causing sucking a small amount of air leaning out white plugs? On the other side it was sucking some oil? Were you using the one piece metal intake gasket or paper with a valley pan?
You do great threads on your work!

Thanks Fran. I love writing about this stuff even though I am learning about much of this as I go.
These are zoomed in "edited" pictures of the cam. I'll post better pictures later.

I may need guidance on how to read the wear but it seems to me that the patterns are not consistent. It looks like some lobes have wear in the middle, others are at the rear. The Lunati cam only had wear at the rear of the lobes.
I did slowly rotate the engine while spinning the oil pump drive. I did see some of the lifters spin, even a few of the ones that were going bad. (It seemed that way to me) Oddly, a couple that were still good didn't shoot oil out of the bottom of the lifter. Maybe 4 or 5 didn't shoot oil out at all. A few lobes and lifters that seem okay didn't shoot oil, a few that were going bad DID. That is strange.
I see now what Dwayne meant by the short lifter bores and the oil gallery that run through them. The stock height flat tappet lifters are well supported especially at moderate cam lifts. A higher lift with a roller seems risky!

Yeah it really is ideal to bush the lifter bores if going roller but it is doable otherwise (well at least if the bores measure out well enough for good lifter to bore clearance).

Not sure if the original blocks are the same as the MP hemi blocks in terms of lifter bore oil passages but the ones on my block were rather big.

So, after getting my lifters I measured them to establish where they would uncover the oil galleries.

After figuring that out and desired lobe lift it ended up .100 away from uncovering the oil gallery on both the base circle and max lift (.428 lobe lift).

Lots of variance with different lifter designs and their actual measured diameter, lobe lift, cam base circle/etc and all has to be figured out to not end up with a gusher. 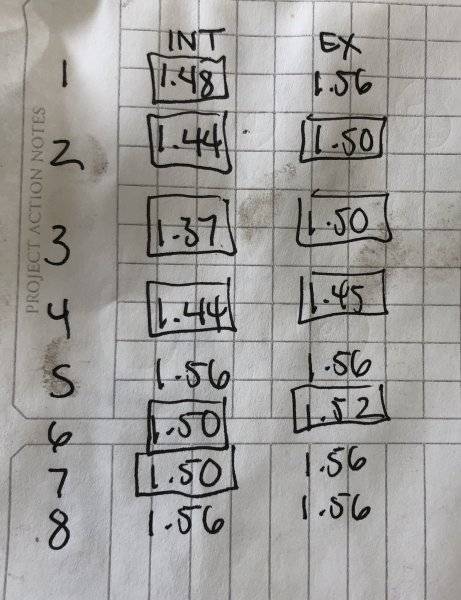 Yeah. 10 lobes bad. 6 measured 1.56 and the rest varied. Cylinders 2,3,4 and 6 had failing lobes on both valves.
I am amazed that it ran as good as it did. A couple failing lobes had lifters that had a dull finish on the bottom but not scored up.
I just measured the Lunati. Most lobes measured 1.55 but a couple were 1.53 and 1.54. The lifters for the Lunati are the same Howard’s brand EDM. 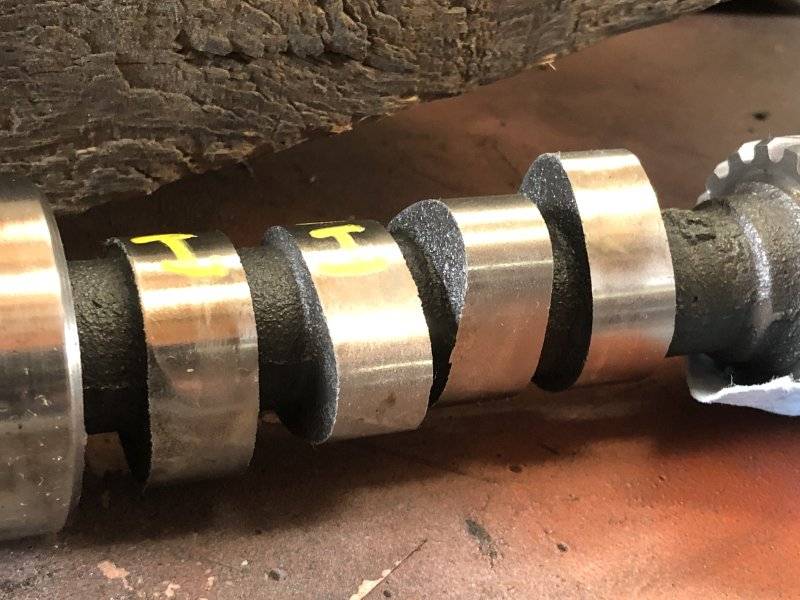 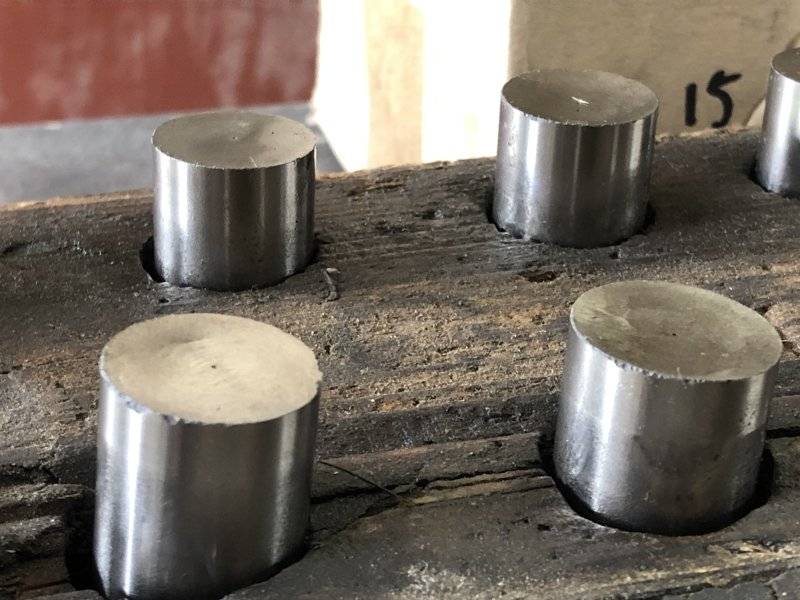 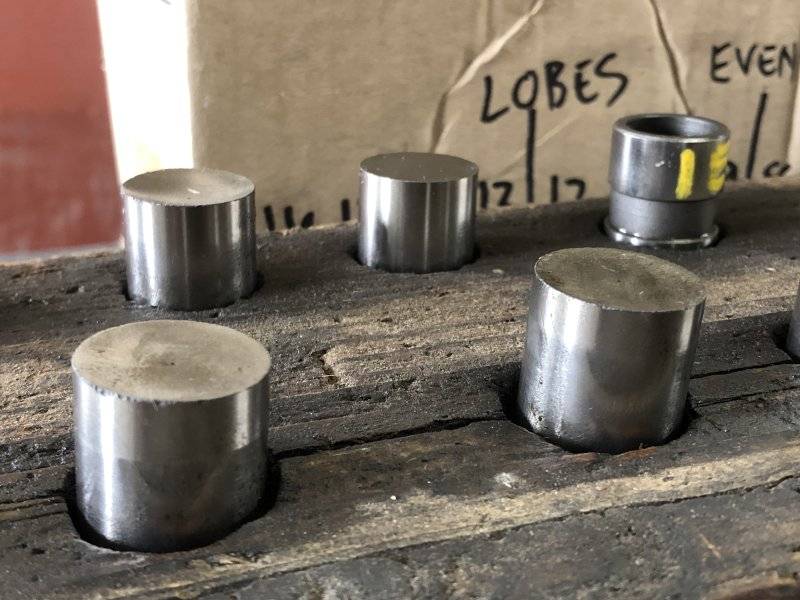 Kern Dog said:
The Lunati cam ran fine and obviously has no unusual wear as far as I can tell. This tells me that whatever led to the failure of the 528 might not be related to the engine block in terms of lifter bore angles. The '509 cam I ran for 8-10 years prior to the Lunati looked great when I pulled it out too. I was told that the MP cams had less taper than most aftermarket cams so the lifters are less likely to spin.
I spoke at length with Dwayne Porter this afternoon. I was looking for assurances on which way to go with all of this. He told me the pros and cons of roller cams and the accommodations needed to get them to work in an engine never designed for them. I was looking for some advice to sway me one way or another. He did a great job of laying out the information as he knew it. He said that proper lubrication plays an important role in all of this....and here is where I may have made a mistake.
From 2006 when I wiped out my first cam, I started paying attention to the special needs for the flat tappet engines. We all have heard of the reduced zinc and how new oils don't use or need it since everything new is roller this and roller that.
I used Valvoline VR1 for the most part for many years with this 528 cam. Sometime about a year ago I started using this oil:

Synthetic is good, right?
Well what about this?

When I told Dwayne about this oil he seemed to stop in his tracks. I told him that I used this along with the Comp Cams break in supplement. He said that he isn't a fan of supplements because the chemicals they have in them may not be compatible with the oil and actually cancel each other out.....PLUS this oil that I have been using is a high detergent blend. He said that the detergent actually can strip the zinc from the lifters and lobes leaving them LESS protected than a non detergent oil.

My lack of knowledge may have caused this early failure. I read "synthetic" and "ZDDP" and thought that it would buy me extra protection. He suggested a product called "Driven" in a thicker weight than the 10w30.
Click to expand...

You experimented and it didn’t work out in your favor

To much ZDDP as in a additive , can bee worse in regards to your engine oil

Been running Valvoline VR1 for many years with zero issues , just like you before
G

You want to see a weird oil band? Check out the lifters that came with the Lunati cam.... 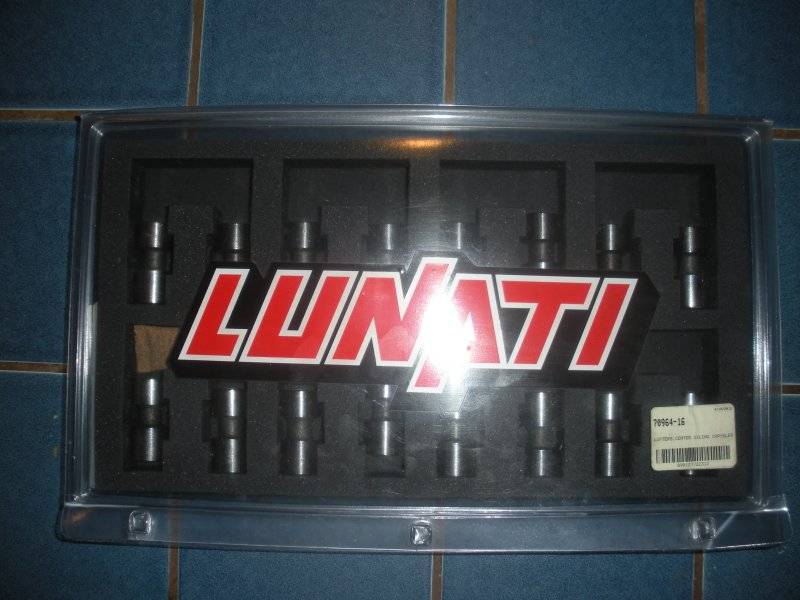 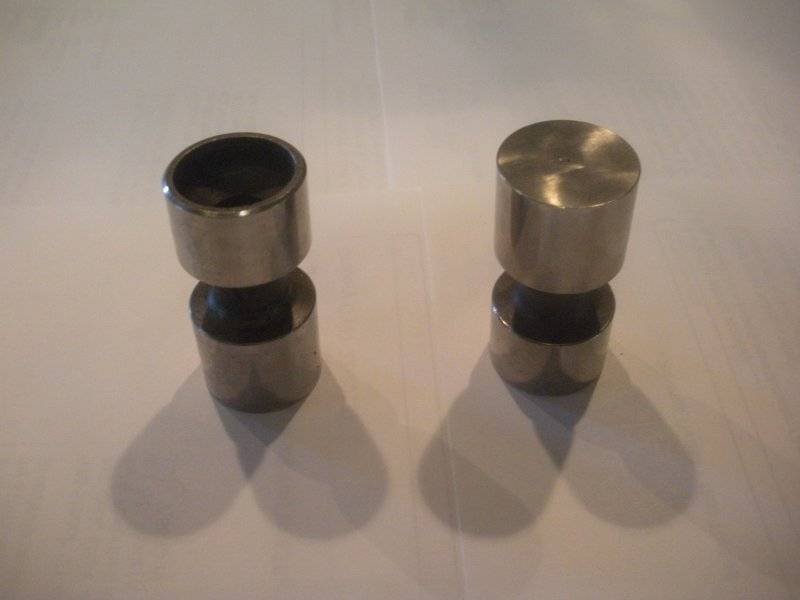 The Howards do have a wide band but it isn't very deep of a recess. I always had great oil pressure. 70+ cold with 10w30 even before pulling the engine.

I see your point about the possibility of the lifters being cocked but they were ones that had wide lash before I adjusted them the last time. I wonder if the cam lobe or the lifter was already failing and with the increased clearance, the lobe was just smacking the lifter enough to break off pieces of it.
G

A few questions if you don't mind.
Rotating Assembly Oil 'throw off' is an integral component to Cam/Lifter Oiling in these engines.... and the unimpeded flow of Oil is also critical to Bearing and Engine Temps in Performance applications
What Bearing Clearances are in the Engine that you are using extremely thin Oil like a 10W-30 ?
Did the engine run HOT as well ?
also,
I read through as best I can... however I see no mention whatsoever of the actual V/Spring Pressures beyond 'compatible'
What are the Valve Spring pressures as 'installed' when closed ? and the V/Spring rate or pressures 'over the nose' ?

ZDDP(extreme pressure) Additives do not work well with synthetics.... you are better off using straight synthetics once the Cam is broken in as Flat Tappets once a wear pattern is well established seem to run fine without ZDDP in my experience.

Thank you for responding.
The bearing clearances at the rods and mains were within stock specifications when I assembled the engine in 2011. The rods all came in under .002. The mains were.0015 to .00175
The valve springs were new replacements That are what came with these Edelbrock heads when I bought them in 2004. In 2013 when I swapped in this Lunati cam, I installed new springs from Summit. I don't have the tools to measure pressures.
Thin oil? I didn't think it was too thin but I'm open to suggestions. The oil pressure was always good. It never got below 25 at hot idle in gear when I had the automatic. It never had an overheating problem either. I read that 20w50 was more for engines with loser tolerances. Is that incorrect?
Last edited: Jun 5, 2022

If your bearing specs are correct , your clearances are pretty tight honestly

10W30
You must log in or register to reply here.

MP 528 solid. What hydraulic cam would be the equivalent?
2