Today i had a very bad day (Broke parts worth 2k)

davek said:
same problem with old WP ? is that why you bought the new one?
Click to expand...

When i first got the car yes. I then replaced the fan clutch and it seemed to have gone away.
Shortly after the water pump went bad. I replaced it because it was leaking, not because of wobbling issues.

wonder if the clutch fan is getting damaged from the shipping ,not a defect.

Some fan clutches (viscous coupling) have to be stored correctly or the silicone fluid will run out.

Maybe they develop a wobble if spun without the silicone fluid?

1.) When checking the motor mounts, just put the car in gear and hold the brake tight..... goose it a little, carefully.... the motor will jump up on the drivers side if bad....the air cleaner can even hit the hood. Have someone watch for it in a safe position.

2.) Take the fan and clutch off and leave them off... bolt the pully back and and start the car for a couple minutes... wont hurt a thing. How do the belts, pulleys, pump shaft and everything else in the front of the motor look now?? Smooth and quiet, or not so much??

DeltaV said:
Maybe they develop a wobble if spun without the silicone fluid?
Click to expand...

I think new old stock can be a problem here, and you are right about storage. They learned over time about issues with Fluidampers the same way.... the semi viscous fluid loses its viscosity and becomes an out-of-balance balancer lol, but only if the thing sits for a way extended period of time.

DeltaV said:
Some fan clutches (viscous coupling) have to be stored correctly or the silicone fluid will run out.

Maybe they develop a wobble if spun without the silicone fluid?
Click to expand...

RemCharger said:
Exactly....
And NOS... so it might be 50 yrs old..but was it from year one...too many unknowns
Click to expand...

The reproduction one was from yearone. The NOS one not.
But what to buy if both turn out to be bad?

This guy on FCBO said it best (on storage)

I just checked and the gates water pump i bought was only 22.79$

Yeah man i start to think that this is my issue.
Because ya know i thought the wobbling was solved after replacing the fan clutch and after installing this gates water pump i noticed it again at the very first start.

Not sure yet but what do you want to expect for 22.79$.
I didn't realise that i went that cheap.
M 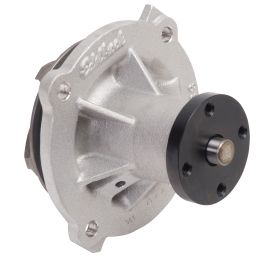 1.) When checking the motor mounts, just put the car in gear and hold the brake tight..... goose it a little, carefully.... the motor will jump up on the drivers side if bad....the air cleaner can even hit the hood. Have someone watch for it in a safe position.

2.) Take the fan and clutch off and leave them off... bolt the pully back and and start the car for a couple minutes... wont hurt a thing. How do the belts, pulleys, pump shaft and everything else in the front of the motor look now?? Smooth and quiet, or not so much??
Click to expand...

23$ water pump ruins 1500$ radiator. Wouldn't that be nice? We'll see. I almost hope so cause that would be a pretty easy fix.

66 Sat said:
Instead of throwing parts at it start looking at it analytically.
Click to expand...

Michael_ said:
23$ water pump ruins 1500$ radiator. Wouldn't that be nice? We'll see. I almost hope so cause that would be a pretty easy fix.
Click to expand...

If the cause, then press them to pay for damages. Maybe you'll eventually get something from them.

Used the short Hayden to play it safe. I wouldnt trust any repo units. 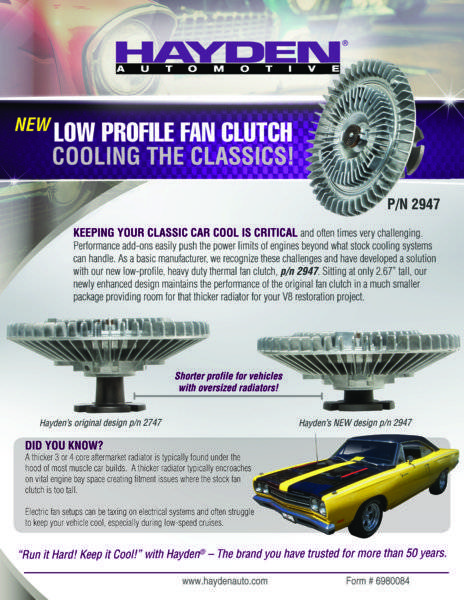 I start at the beginning:
When i bought my charger the cooling fan already made contact with the radiator -> noise.
We thought its the fan clutch and i ordered this new one: 1966-1972 B Body fan clutch for model with A/C. Reproduction
AND an nos part. I also bought a new fan (Reproduction 1968-1973 B-Body 18 1/2 7 blade engine cooli...) because the original one was bent out of shape a little.
We then installed the yearone clutch and the new fan which seemed to solve the problem for the moment.
I also ordered a new fan shroud (which was missing) and we installed that aswell.
I also ordered a brand new glen ray radiator but did not install at that time.

Shortly after the water pump went bad and coolant was leaking out at the weephole which also threw off all belts except the water pump belt.
I went ahead and ordered a new gates water pump, gates thermostat, fel-pro gasket & gates v-belts.

A couple days ago we installed the new gates water pump and after that noticed the fan wabbling around a bit such as making contact
with the radiator again when you revved it up.
I though the new yearone fan clutch probably broke already. (Since you hear so many stories of new parts being trash right out the box)

Today we installed the new v-belts, NOS fan clutch (so replaced that again) such as the new glen ray radiator (which i regret A LOT).
What can i say, after we filled the system with rain water and let it run at idle for maybe 10 minutes the fan ran into the radiator core and
water spilled all over the engine bay. New 1,5k radiator (with shipping/tax etc.) destroyed after being in the car for like 30 minutes.
Fan clutch and fan also broke. Made my day.

I wish i would have reinstalled the old radiator to make sure the problem was solved before installing the new one.
Now its to late -.- Have not seen that coming. (That it completely destroyes the radiator core)

So i am the one lucky guy that buys 2 faulty fan clutches or can something else cause this aswell?
The car has this problem since i got it.

PS: At what temperature does the original fan clutch engage? I suspect when it did for the first time, the fan ended up in my radiator core.
Click to expand...

You said the fan already made contact with the radiator. Did anyone checked or looked at the fan spacer?
M

I did not sleep very well last night.
So i got up early and started resolving the mess we created yesterday.

Getting that totally bent fan outta the car is amongst the hardest things i've ever done:
(It shoveld itself in the radiator core like welded to it) 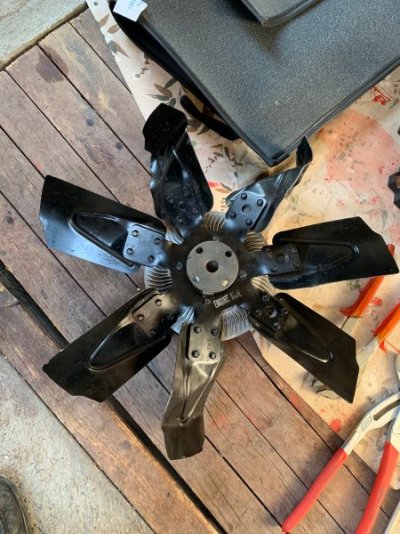 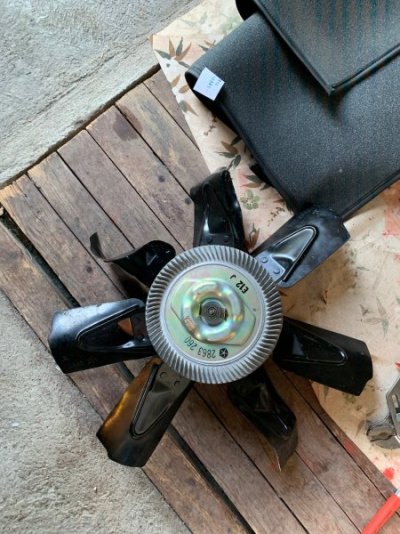 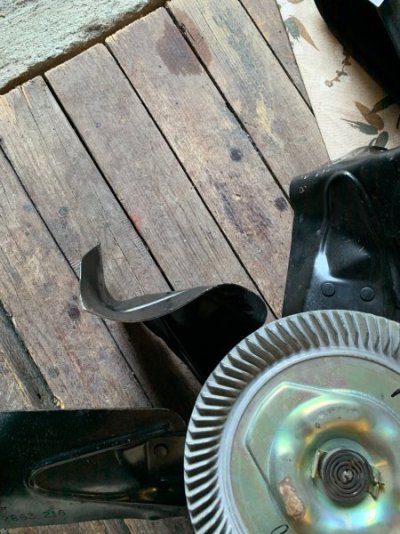 The nos fan clutch at least cosmetically still looks fine, though.
I noticed the nos fan clutch is ~ 0.3-0.4" deeper than the reproduction unit that was in the car before.
So that's probably the reason why it completely destroyed the radiator core instead of just lightly touching it.

Look at my (brand new) radiator: 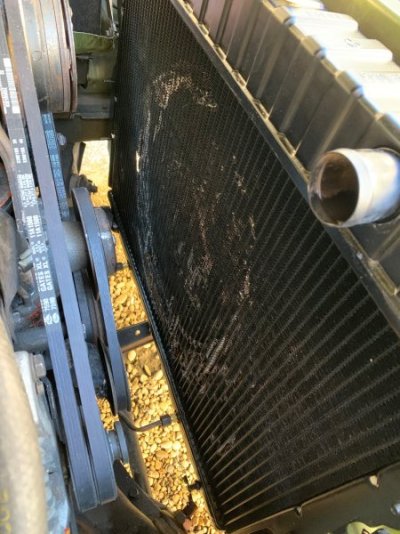 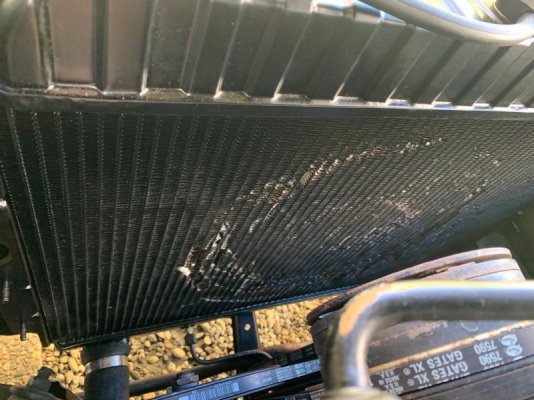 Well i bolted the water pump pulley back on and let it run at idle, i think its not wobbling?
(So it looks like the water pump or water pump pulley isn't the issue?)
Don't worry about the belt its a bit loose but it's brand new (installed it yesterday) and it just needs to be re-adjusted a little bit.
Its not squealing or anything, though.

MixDrop - Watch Water Pump, Pulley and Belt when revving it up 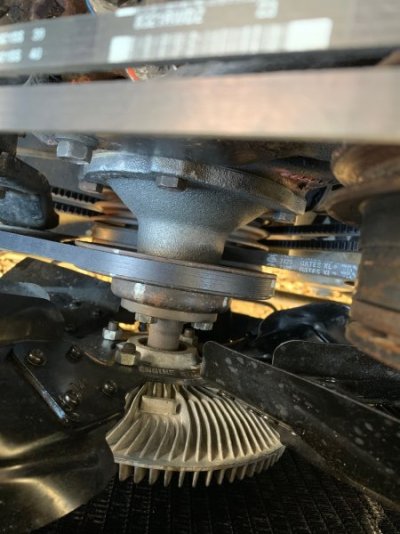 At the start where it lifts a bit more is when he put it from park in drive. (The clunk is the transmission issue)
Its lifting a bit more then but i think thats probably normal?
After that (when its in drive while holding brakes and giving it some gas) it looks fine to me? (I mean a bit of movement is normal, right?)

I'm not a professional mechanic.
Let me know what you guys think based on the photos and videos.

I really hope you're not saying motor/transmission mounts because i don't know how i should change them in my dirtfloor driveway and without an engine hoist.

If you guys do not see anything out of the ordinary i will do the fan clutch delete next and see what it does.
But look at the fan clutch, the bolt holes/threads for the fan and water pump do not line up. (fan holes wider out then water pump holes) 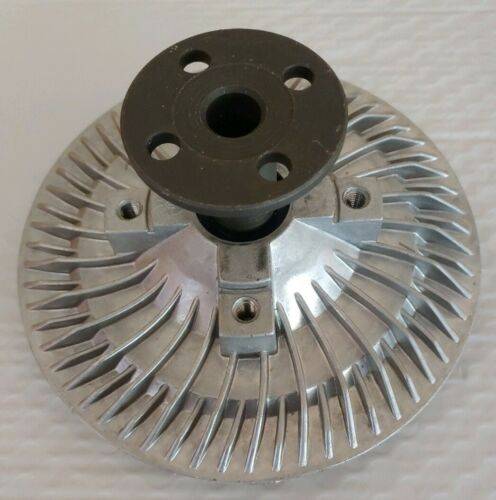 (Not my fan clutch, picture of internet)

So it seems that this spacer does not really work without a fan clutch. 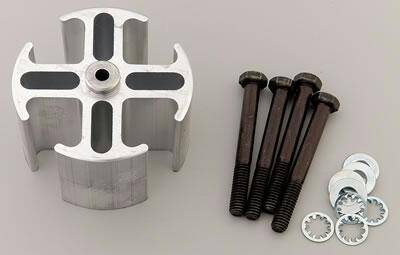 There must be an adapter or another water pump pulley to use the fan without a fan clutch?

You should have a good 1 inch, if not a more from the closest points of the fan to the radiator. Have you measured that? That one pic looks like it's dam near scraping it! Good Luck

By
aftermarketNews Staff
on
August 8, 2006


The new company, with a proposed name of Gates Winhere Automotive Pump Products (Yantai) Co., Ltd. will allow Gates to increase its product coverage of replacement water pumps for automotive passenger cars, lights trucks and heavy-duty vehicles. Production is expected to begin in the fourth quarter of 2006.

Manufacturing operations will be headquartered at an existing Winhere facility in Yantai, a coastal city in Shandong Province in northeast China. Mike Smith of Gates Corp. has been named president of the joint venture company. William Lee, Winhere’s water pump general manager, will retain his current title and responsibilities in the new company. “William has done an exceptional job of founding this business and growing this business which now has customers around the world” says Smith.
You must log in or register to reply here.